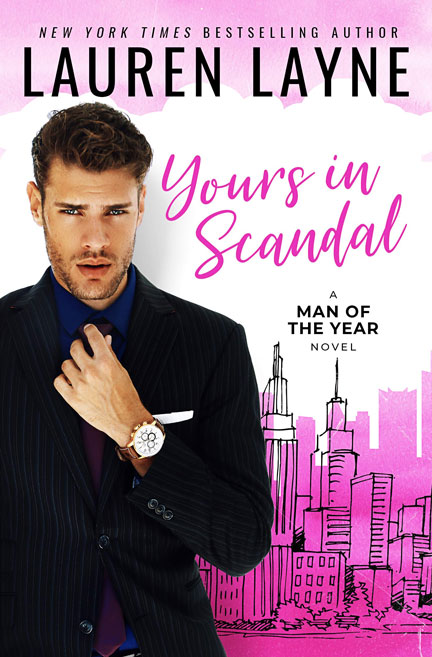 An interview with Lauren Layne, author of Yours In Scandal.

An interview with Lauren Layne!

You have a new series releasing this month! What is it about?

The series features three men who are named “Man of the Year” (think: People’s Sexiest Man Alive) and the unexpected ramifications that come with that!

What’s the name of the series starter? What is it about?

On March 10th Yours in Scandal releases (one of my favorite my booktitles, if I do say so myself!) This book kicks off the series with a young, wealthy mayor of NYC who falls for his political rival’s daughter.

How is this book different than your previous stories?

Writing a politician was a unique and fun challenge for me (I tend to write a lot of businessmen!) so a new take on my “hot guy in a suit” was a fun creative challenge!

Can you tell us how you created your plot and characters?

The first thing I always do when I get a new story idea is to figure out where the conflict is—I have to make sure these two people, however attracted, can’t get together (easily) by chapter three. When I decided to take on a hero who’s a mayor, I took a step back to think which woman would be most off-limits to him. One with a bit of scandal was the obvious answer, since the spouses of politicians are usually held to the same exacting standards (if not more so) than the politician him/herself!

What is an ideal writing day for you?

It’s a luxury, but by far, my best writing days come when I have nothing on the calendar. I wake up at 5am to write, and if I have a “social engagement” on the calendar, even if it’s not until 7pm, it messes with my head and it’s harder to get into the zone. Days when my calendar app informs me I have “a free day” are by far my happiest and most productive.

It is clear from this book that you absolutely love your setting New York City. What are some of your favorite places to visit in the Big Apple?

Well, it’s a little different since I live in NYC—so I sometimes have to put on my “tourist glasses” whenever people come into town and ask what they should do, because a lot of the tourist-favorites aren’t places locals would generally go (Times Square!). That said, Central Park always comes to mind as a place in the city where visitors and locals flock, especially on a beautiful spring day. I also love the New York Public Library, Grand Central, and Fifth Avenue.  My best advice? Walk everywhere. The magic of New York really is about the sheer energy of the city—being out in that energy is contagious!

What can readers expect from you next?

Title: Yours In Scandal

Rebellion is a thing of the past for Adeline Blake. As New York’s premier event planner, she’s all about reform and respectability. Then she’s approached by Robert to organize the party of the season. Curious, considering he’s her father’s most formidable opponent. And alarming, too. Because Addie can’t help but fall for the righteously popular candidate with the movie-star smile.

Now it’s Robert’s choice. Does he pursue a future that holds his legacy? Or the woman who holds his heart? Lauren Layne is the New York Times and USA Today bestselling author of more than two dozen novels, including Hot Asset, Hard Sell, and Huge Deal in her 21 Wall Street series, as well as her Central Park Pact series. Her books have sold more than a million copies in nine languages. Lauren’s work has been featured in Publishers Weekly, Glamour, the Wall Street Journal, and Inside Edition. She is based in New York City. For the latest updates, be sure to check out her website at www.laurenlayne.com.