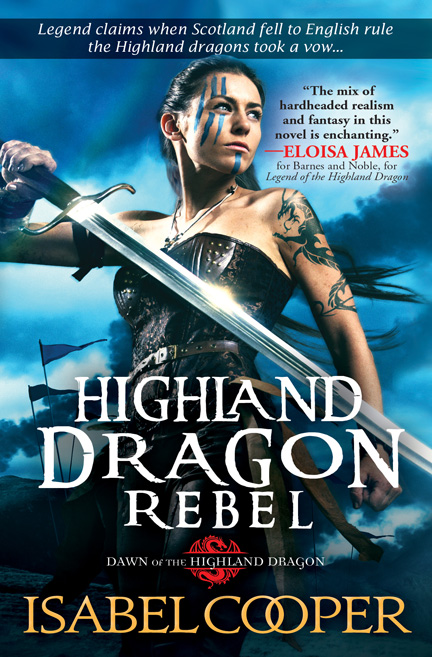 So long as dragons rule the skies, Scotland will forever be free.

After a long and bloody war, Scotland has finally won its independence. But Highland dragon Moiread MacAlasdair knows peace balances on the edge of a blade, and she will do anything to keep her homeland from falling to English control.

Even if that means escorting a powerful new ally into the otherworld itself…and defending him with her life. By wing, by claw

By fire, by death

So long as dragons rule the skies, Scotland will forever be free.

After a long and bloody war, Scotland has finally won its independence. But Highland dragon Moiread MacAlasdair knows peace balances on the edge of a blade, and she will do anything to keep her homeland from falling to English control.

Even if that means escorting a powerful new ally into the otherworld itself…and defending him with her life.

Madoc of Avandos is on a critical mission to cement alliances against the British. Powerful men would kill to see him fail—but as he and his fiercely beautiful warrior fight their way through hostile lands, Madoc is faced with a difficult choice: sacrifice everything for the cause…or let himself burn for the love of a dragon.

“You’ll only have to do this the first time,” Moiread said. She sat tailor-fashion on a flattish stone. The brook at her side rushed loudly, swollen with the spring rains. “After, it’ll just be a matter of saying the words. It’s a compact you’re making, like most spells, though I’ve not heard of anything coming in person to agree. Too minor.”

Magic, or most magic, was a matter of talking directly to the forces of the world: the spirits of those forces in the oldest tales, the demons or angels governing their spheres in more modern lore. All spells invoked, most indirectly. Madoc had never been present for an actual summoning. When he was thinking sensibly, he was glad of that. Everything he’d learned said that even the holy ones would frighten the bravest man.

She held out a twig of yew, dark needles and bright-red berries attached. In the last village they’d passed through, Moiread had taken them by a churchyard and stopped long enough to break the twig off the tree, which, as in many villages, grew by the gate.

“Now,” she went on, when Madoc had taken the twig, “hold it up and repeat after me.”

Slowly Moiread began, in Latin as good as any priest’s. “In the names of Gabriel, Amariel, Nargeron, and Almighty God, I call upon you, O powers of the worlds. I invoke you, and by invoking, I command you to grant me sight of the union of the spheres. Part the veil that blinds mortal eyes and give me to see the subtle workings of the world, now and whensoever I should invoke it again.”

As Madoc followed her lead, he felt power gathering. It wasn’t much—as Moiread had said, this was a minor spell—but the earth and the air both shifted, as if he could feel them being drawn slightly toward the yew twig. The twig itself began to feel both heavier and less present. Madoc was half worried that his fingers would go through it. In the sun at midday, it was hard to see, but he also thought it glowed. Moiread nodded. “Now crush the berries. Close your eyes, and smear them on your lids.”

The sliminess Madoc had expected lasted barely a moment. Then it turned to a cool tingling across his closed eyelids and, in another heartbeat, vanished. His skin felt untouched.

Madoc did, and caught his breath. He was no stranger to magic, but never had he been able to see the whole world through such entirely different eyes.

A faint haze hung above the grass and trees, a paler shadow of their natural green. The rocks and road looked normal, though their colors were deeper than they had been a moment ago. Madoc looked to the horses, peacefully cropping new grass a few feet away, and saw that each of them glowed a shade of brown: the steady darkness of wheat bread for Moiread’s horse and a slightly lighter color for Rhuddem.

Madoc raised a hand in front of his face. His fingers shone red, shot through with streaks of silver. He flexed them, and the colors shifted accordingly.

“Useful, at times. But aye,” Moiread said admittedly, “rather beautiful too, in its way.”

She was beautiful. The spell stripped her of her illusion. Her hair lengthened slightly, her figure swelled and narrowed, and her face became a shade more delicate, so that a young-looking woman in men’s clothing sat facing him. In the world of the spell, a pattern of dancing lights played across her body, like diamonds set onto the crisp blue that washed over her skin.

In this world, her shadow was nothing remotely human. Two vast wings stretched out behind her, the brook running through their shade. When she tilted her head to watch him, the shape of an immense head, on a serpentine neck, separated itself from the larger shadow and turned toward Madoc. The same pattern of lights glittered in the shadow.

Mayhap it would have been sensible for Madoc to fear her then, but he wished only that he had more time to sit and watch her.

“A bit revealing, aye?” Moiread asked, clearly aware of where he was looking. To his relief, she sounded amused. “That is why we don’t generally teach the spell. We didn’t come up with it, but we’ve enough luck that not many know it.”

“Do you care so greatly for concealment?”

She shrugged a shoulder. “It’s no great peril, in my view of things, to be found out. There are already those who know what we are and speak of it with varying degrees of truth. Once more knew, or we were more willing to admit it, or both.”

“To us? Time and duty. The world gets fuller. A clan turns from hunting to farming, and it’s no’ such great use for its laird to spend his days flying in dragon shape. Less use still in court, and we must go there to be part of the greater world, to lead a clan rather than a tribe in a cave. Our sires have other duties, and we as well. Our foes have magic of their own. Dragon shape is no sure victory.”

“I have heard that,” said Madoc, “and seen a little too. Only ran into one sorcerer myself.”

“We’ve not fought them often, no’ directly. The English magic turns more toward enchanted weapons”—she rubbed her calf, wincing in memory—“ or strengthening castles. Crafty spells.”

“Like the one I’m doing?” Madoc asked, speaking the words that courtesy would have Moiread avoid.

“No shame in taking a weapon from your foe,” said Moiread. “We may have fought the people we learned this from”—she gestured around her, indicating the world revealed—“ or we may fight them in the years to come. I’m still glad to have it.”