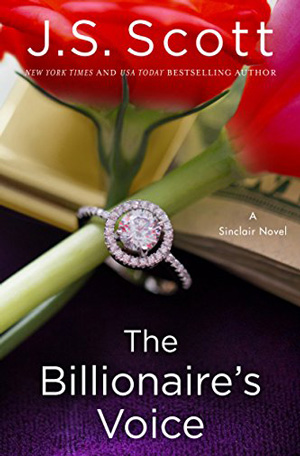 As an extreme-sports mogul, billionaire Micah Sinclair is comfortable taking risks. But nothing—and no one—has ever challenged him like Tessa Sullivan. He’s fascinated by the woman who’s overcome so much, including the loss of her hearing. The petite blonde dynamo, a small-town restaurateur on the Maine coast, is the most courageous person he knows, and he wants her in his bed. Now all he has to do is convince Tessa to explore their desire.

Eventually, Tessa stopped blubbering like an idiot, but she didn’t leave the safety of Micah’s arms. Her entire body was trembling, and it had been so damn difficult to force herself to get back on the ice and skate. But once there, she’d never felt anything more magical.

Her body had taken over, following the sequence of movements that must have been ingrained in her psyche. It hadn’t really been necessary to think much about what she’d been doing. All she’d had to do was listen to the music in her head and skate.

She relaxed against Micah’s hard, well-defined body, savoring the feel of his powerful muscles against her softer form. The sense of connection between them made her release a contented sigh. Her world might be silent, but all the rest of her senses were on high alert.

Micah smelled like rough, male temptation, and he felt like sensual sin. What was just a comforting hug to him was something far different for her.

Don’t even think about it, Tessa. Micah Sinclair is just a friend.

Finally, she pulled back to look at him. “I think I can do this. I’d need to practice the more complicated jumps, and somehow I need to know I’m matching the music in my head to the recording that’s playing, but I don’t think it’s impossible. I’ll just need to make up signals that somebody can give me from the sideline to keep me on with the music.”

He grinned at her, an unruly lock of hair on his forehead making him appear more carefree than she’d seen him since he’d arrived in Amesport. “Almost nothing is impossible,” he replied.

“Maybe for you,” she answered teasingly.

Some of the things Micah had done in the past just to prove they weren’t insurmountable feats made her heart clench. She’d watched the TV breathlessly as Micah and his well-known team of elite skydivers had performed stunts that had never been attempted before, and she’d breathed a sigh of relief as each one of them finally landed on solid ground. In his younger days, it had seemed that his sole objective had been to set world records, and many of them had still never been broken. There weren’t many crazy things that hadn’t been done in the past by one of the richest and well-known daredevils in the world: Micah Sinclair.

He stood and pulled her up beside him. “Not for you, either,” he answered, both signing and speaking so she’d catch his words.

Hell, he even does ASL well. Is there anything he can’t do?

Micah had told her about the deaf friend he’d met in college, which was why he knew ASL so well. According to him, he hadn’t used the skills in years because his buddy had gotten cochlear implants and didn’t use ASL anymore. But he didn’t look rusty or hesitant. He signed confidently and with as much cockiness as he did everything else.

She could argue that plenty of things were impossible for her, but she was relieved just to have gotten through the experience of being back on the ice. For so many years, she’d been afraid that she wouldn’t be able to skate again. Whether the notion had been rational or not, she’d been too afraid to find out whether or not she’d lost her skills along with her hearing. The two things were intertwined: skating and music.

Without being able to hear the notes, she’d assumed that she’d be unable to perform at the same level as before.

I’m out of practice, but I can work up to doing the more difficult jumps.

Tessa had done it once, and she knew she could do it again. Maybe she wouldn’t be of the same caliber as before. She was older, deaf, and hadn’t worked on any skating routines in years. But the raw ability was still there to be able to perform a good routine. She just needed time on the ice.

Her heart was still pounding with exertion and euphoria as she looked up at Micah and smiled. She was grateful to him for pushing her, making something she loved part of her life again.

The deliciously dangerous, hungry look in his eyes made her smile falter, her body start to clamor for something far more primal than a hug.

I can’t want him. He’s a Sinclair and I’m a washed-up former Olympic champion. He dates supermodels, for God’s sake. I can’t confuse his kindness for desire.

Tessa had fought her instincts for days now, and it was getting harder and harder not to remember Micah’s hard, muscular body completely nude. God, he’d been breathtakingly perfect, a flawless specimen of masculinity that wouldn’t leave her mind. Unfortunately, that image had never gone away, and when he looked at her like he wanted to have her for dinner, she was so damn tempted to throw herself at him and beg him to make a meal of her.

She froze, unable to break his gaze, the longing she felt reflected in his gorgeous dark eyes.

The mantra pounded in her head, but she met him halfway as his head lowered and he captured her mouth with his, blowing the chant straight from her brain.

He did want her right now, and she wanted him back. Summary: As an extreme-sports mogul, billionaire Micah Sinclair is comfortable taking risks. But nothing—and no one—has ever challenged him like Tessa Sullivan. He’s fascinated by the woman who’s overcome so much, including the loss of her hearing. The petite blonde dynamo, a small-town restaurateur on the Maine coast, is the most courageous person he knows, and he wants her in his bed. Now all he has to do is convince Tessa to explore their desire.

After a lifetime of loss, Tessa’s finally come to terms with her limitations. Or she would, if a certain sexy businessman weren’t pushing her to want more. And to want him. All her remaining senses are clamoring for her to touch, taste, and feel. But her doubts tell her to go slow when their passion gets too hot.

Micah’s determined to prove to Tessa that she can still have everything she’s ever wanted, including his love. But will she listen to her head—or her heart? 6 Responses to J.S. Scott and The Billionaire’s Voice–Exclusive Excerpt & Giveaway