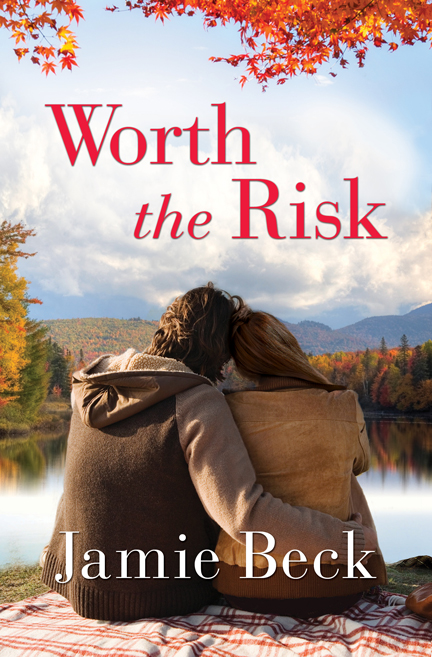 Meet Gabby, Jamie Beck’s Newest Heroine  ♥  Thank you for hosting me today to talk about the final book in my St. James series, WORTH THE RISK. Although it can be read as a stand-alone, I think the series’ fans will be especially pleased with the way Jackson pulls himself out of the downward spiral he’s been in throughout his siblings’ stories. Thank you for hosting me today to talk about the final book in my St. James series, WORTH THE RISK. Although it can be read as a stand-alone, I think the series’ fans will be especially pleased with the way Jackson pulls himself out of the downward spiral he’s been in throughout his siblings’ stories.

I’ll admit it, Jackson is my favorite St. James because of his generous heart and absolute sense of loyalty. My love for him, and the heavy cynicism he’s adopted, demanded he have a fabulous heroine to help him recover. Enter Gabby, a young, single mom who has overcome a lot of obstacles while maintaining a sunny, optimistic outlook on people and life.

Gabby is sweet but strong, savvy but simple, and most importantly, candid. She doesn’t hide from trouble or from her feelings, and she’s willing to take chances if she believes the outcome may be worth it. Abandoned by her pill-popping mom in her young teens, she rebelled and got pregnant before her twentieth birthday. Her then-boyfriend bailed on her, leaving her to raise her son with the help of her father, with whom she now lives. At the beginning of the story Gabby sees herself as a bit of a screw-up who needs her dad’s help.

Reckless. That’s what she’d always been—plain old reckless when it came to men. She’d thought having Luc would wise her up, but apparently her toddler hadn’t yet knocked common sense into her brain. Boundless love, enormous responsibility, and a long spate of chastity: yes. Wisdom? Not so much.

Despite everything that’s happened in her young life, she’s a lemonade-from-lemons kind of gal who is happy running her small landscaping business and raising her toddler. Her primary goal is to be a better mother than the one she had.

“The most important thing the whole experience taught me is that I have to be a mom Luc can always be proud of. One he can count on. I won’t let him be hurt by someone he should be able to trust. Not even if that person’s his own father.”

Of course, living in rural Vermont has some drawbacks—like monotony—which makes Jackson’s arrival quite exciting. She’s never met the likes of him—the mysterious, handsome outsider who rents her garage apartment—and she’s more than a little intrigued, especially when he immediately helps out without asking for anything in return.

[D]espite the hint of unhappiness simmering behind his eyes, she couldn’t escape the sort of momentous feeling he inspired. Anticipation bloomed in her fallow heart like the fragile shoots of winter aconite breaking through freshly thawed soil.

Then, laughing to—or at—herself, she turned and went inside, back to reality. Whatever did or didn’t happen between her and Jackson, six weeks from now he’d leave, like everyone else, and never look back.

Of course, when she learns of his addiction problem, it sets her back because she’s already lived through that disappointment with her mom. Still, her compassion for his situation overrides her other concerns.

She knew exactly how sickening it felt to expose an unflattering self-truth. How he must feel standing before her now—vulnerable—braced for judgment and disappointment. Precisely how she’d felt when forced to announce her accidental pregnancy.

So while she couldn’t pretend enthusiasm or nonchalance, she would take care not to treat it, or him, with scorn.

Jackson and Gabby face a long list of obstacles including an eight-year age difference, the fact that his family and business are back in Connecticut, his addiction, and her ex. But Jackson’s fairly awed by her spirit, which came into his life when he’d about given up on having faith in anyone being good for their word.

His admiration and affection help her mature into a young woman who confidently tackles her own problems without relying on her father’s help.

I think it’s safe to say that readers will wholeheartedly root for this couple to overcome everything standing between them and their happily-ever-after! Jamie Beck is a former attorney with a passion for inventing stories about love and redemption. In addition to writing novels, she also pens articles on behalf of a local nonprofit organization dedicated to empowering youth and strengthening families. Fortunately, when she isn’t tapping away at the keyboard, she is a grateful wife and mother to a very patient, supportive family.

One Response to Jamie Beck–Worth the Risk Spotlight & Giveaway