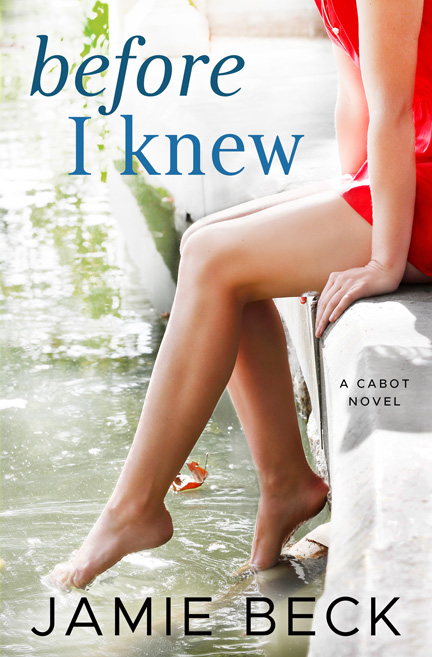 Q&A with Jamie Beck, author of BEFORE I KNEW.

Your newest release, Before I Knew, features heroine Colby Cabot-Baxter who is a widow. Your story focuses a lot on Colby’s turbulent marriage and her healing process after tragedy. This is different from some of your other, lighter romances. Why did you take on the challenge of writing about a widow?

While the tone of some of my previous books may have a light touch, I’ve routinely taken on serious subjects that I think my readership might relate to (infidelity, abandonment, alcoholism, infertility, miscarriage, drinking and driving, and so on). In this book, I wanted to explore the concept of mental illness and stigma, and how those two things not only affect the afflicted, but also everyone who loves them. Colby’s troubled first marriage to a bipolar husband who took his own life gave me a lot of emotional material to work with to deliver my message. I hope I succeeded in showing how damaging stigma can be, while also providing readers with a satisfying, tender story about the power of love and hope.

What are some of the things that you learned about your heroine (and yourself) while you were writing the story?

Interestingly, Colby is probably the first character I’ve written that is a lot like me. I didn’t set out to do that, but by the time I got halfway through the manuscript, I realized how alike we were. She desires stability and order, and has spent most of her life bending to and pleasing others in order to keep the peace. She doesn’t have a large group of friends, but she’s committed and loyal to those she holds dear. She’s diligent, accomplished, yet sometimes takes on more than she should. She can overreact at first when pushed into a corner. And she’s gunshy about making herself emotionally vulnerable to any man because it cost her so much the last time she tried. I’d say that, to some degree, I possess all of these attributes as well. While writing this story, I learned a lot about why I made certain mistakes, how I let guilt overwhelm me, and that I have to forgive myself before I can be free to move on.

Alec Morgan is a hero that is dealing with his own demons. What has he been through and what is pushing him forward?

Alec grew up being an object of ridicule in his own house. His father and brother picked on his gentle nature and love of cooking, which derision drove a deep wedge between him and his brother as adults. Ultimately that led Alec to make a snap decision that he blames, in part, for “pushing” his brother into taking the dare that ended in tragedy. Weeks later, Alec compounded that mistake with a second one that involved Colby’s husband. Since then, he’s kept both of these things secret from his father and Colby, which isolated him and mired him in guilt, ultimately leading to his own self-destruction.The two reasons he finally fights to rebuild his life are his love for his mother, and his desire to help Colby achieve her new dream (as a way to atone for his perceived role in her widowhood). Initially, he doesn’t have any intention of acting on his long-held feelings for Colby. But of course, this is a love story…

Bringing a lot of shared history into a new romantic relationship can sometimes be good…and other times be disastrous. How does the past affect — both positively and negatively — your couple’s relationship?

I’ve always believed that the bonds we form as children are some of the most genuine of our lives. After all, as kids, we are open and trusting and freer of prejudices and cynicism than ever after. Colby and Alec grew up as next-door neighbors. They trusted and confided things in each other for years, so the basis of intimacy is already present. It takes a few pushes before either is willing to dip their toes in the pool of love, though. Beneath the glassy surface are a lot of rocks they’ll need to navigate to get to the deep end.

Naturally, a reluctance to risk losing the friendship would be a barrier to cross. But with the exception of Alec’s relationship with her brother, and his father’s dislike of her, most of Colby’s reluctance to act on her feelings stem from things unrelated to their history, and more to do with her personal experiences. For Alec, on the other hand, almost all of his doubt stems from the guilt he feels about his secret role in her current circumstances. He also doesn’t want to jeopardize his postion at her restaurant, which is his chance to both atone for past sins and restore his professional reputation.

Readers love your work for the wonderfully unconventional (and unique) courtships you write. How does this couple go about wooing each other? (Are there any particularly romantic scene(s) that have stayed with you?)

I admit, I like the way you phrased this question. Thank you for the compliment. This couple woos very, very carefully because they do not want to destroy their friendship or their new work relationship. As you note, I don’t tend to write “standard” romantic scenes. To me, romance really happens in those deep moments of connection, some of which occur in the least “romantic” settings. While there are certainly some sweet scenes (the flower-strewn dinner he cooks for her to persuade her to let him control the menu, the dance in her living room), some of the most romantic moments between them actually happen at the restaurant. For example, prior to crossing the line of friendship, when fending off the reporter’s inquiry into her husband’s suicide, Alec grabs Colby’s hand in comfort under the table and throws himself in the crossfire to protect her. Or when he brings her mother pastries and keeps her company because he knows the woman’s loneliness troubles Colby. These little moments, when one person proves that they know what matters to you and they show you how much they care by taking up your cause…that’s romantic. That’s love.

This is just the beginning of your Cabot’s series. What can we expect for book number two?

The next book, All We Knew, is Colby’s brother Hunter’s book. Hunter and Sara are college sweethearts who’ve been married for several years. Their book is basically a marriage-on-the-rocks story with some unexpected twists and turns, and one big upheaval. I really wanted to write a love story about what happens after the “I do’s.” After writing eight books that only get readers to the proposal, I thought it would be interesting to write a love story about two people who already committed to each other, who still love each other, but who, for a number of reasons, are no longer communicating well, and are taking the other for granted. The majority of my readership consists of middle-aged women, so I think many of them will relate to elements of this story. And as I write this post, I’m finishing the final book of the series, When You Knew, which belongs to Colby and Alec’s half-sister, Gentry. She’s a hoot, and her hero is a humanitarian EMT. He’s been very interesting to research and write, so I hope readers will enjoy learning some of my newfound knowledge about Haiti when reading that story. Title: BEFORE I KNEW

Distracted by guilty secrets concerning the tragedy that changed his and Colby’s lives, Alec self-destructed and lost his famed restaurant. With his career in tatters, he’s determined to use this opportunity to redeem his reputation and to help the woman he’s loved from afar find happiness again.

But secrets have a way of coming out. When Alec’s do, they might destroy the new life he and Colby have rebuilt together. Author Biography: Jamie Beck is a former attorney with a passion for inventing stories about love and redemption. In addition to writing novels, she also pens articles on behalf of a local nonprofit organization dedicated to empowering youth and strengthening families. Fortunately, when she isn’t tapping away at the keyboard, she is a grateful wife and mother to a very patient, supportive family.