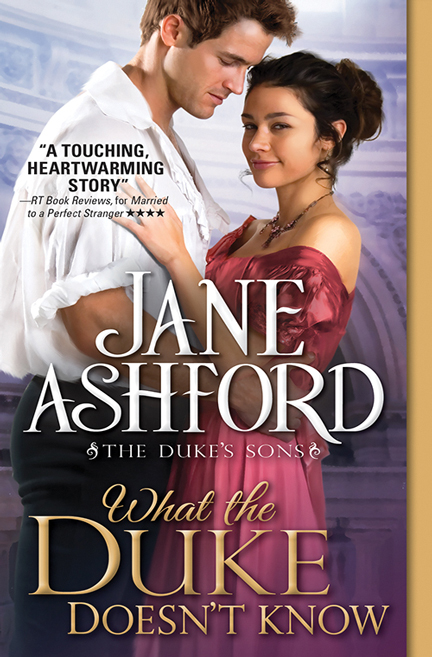 What was the most interesting thing you discovered in researching your book?

In What the Duke Doesn’t Know, the heroine Kawena hails from a remote Pacific island I call Valatu. It’s a fictional place and a fictional culture, so I didn’t have to research it. I made it up! But in sketching out some of the elements of Kawena’s upbringing, I did use thoughts I had about a society where women have roles different from Regency England.

In the Yunnan and Sichuan Provinces of China, close to the border with Tibet, lives a small ethnic group called the Mosuo. As described in a book I enjoyed, called A Society Without Fathers or Husbands, they have a very interesting culture. They don’t have marriage; the institution doesn’t exist for them. Households are made up of brothers and sisters of several generations, who live together their entire lives, raising the women’s children. Sex isn’t part of family life. Each adult woman has a private “flowering room,” where she can receive visits from chosen gentlemen. Subtle signals let the guys know who will be welcome to crawl into any given window. The visits may be furtive or conspicuous, but in the morning the man goes back to the house of his sisters. Bonds are maintained only by affection, and come and go. This is a society with no in-laws. They have no words for bastard, promiscuity, or infidelity. All adult men are known simply as “uncles.”

Women own the land and houses, and have full rights to the children born to them. The oldest female is head of the household. She manages the money and jobs of each family member. With inheritance through the female line, a man with no sisters is in trouble. Men are in charge of livestock and fishing, crafts they learn from older male family members.

“The homes and gardens on Valatu belong to the women,” Kawena said. “They tend the earth. I know it is not so here. My father told me. Island men own their boats. They take the canoes out to fish and sometimes make long voyages to trade or explore. Women hold the trust of the land.”

“Well…” It was true that the idea didn’t sound right in English. This happened to her so often, and the other way around as well. Kawena considered how to explain. “Years ago, when I was small, my English father wanted to build a bigger trading center out of timber, to impress the foreigners who anchored in our harbor. He said they would respect such a building more than one made of palm and bamboo. And my mother asked, ‘What if it is blown down in a storm?’ As it would have been, of course, sooner or later. Nothing can stand against the great storms. And my father said, in that case, he would rebuild it. My mother asked about the next storm and the next. He got impatient then, as if she was being stupid, and said he would rebuild each time. ‘And when the trees are gone?’ my mother asked. ‘For storms come faster than trees can grow.’ And so, we do not have a trading center made of timber.”

James puzzled over this tale. It took him a while to work it out, rather like those parable things vicars liked to pose. “Bamboo grows more quickly,” he concluded finally.

“Sounds like your mother knows her own mind,” he said then.

He was much struck by her choice of words. “Mine’s like that, too.” What the Duke Doesn’t Know

A proper English wife, or the freedom of the sea?

Lord James Gresham is the fifth son of the Duke of Langford, a captain in the Royal Navy, and at a loss for what to do next. He’s made his fortune; perhaps now he should find a proper wife and set up his nursery. But the sea calls to him, while his search for a wife leaves him uninspired. And then, a dark beauty with a heart for revenge is swept into his life.

He can’t have both, but he won’t give up either

Half-English, half-Polynesian Kawena Benson is out to avenge her father and reclaim a cache of stolen jewels. There’s nothing for James to do but protest his innocence and help Kawena search for the jewels, even though it turns his world upside down.

Jane Ashford discovered Georgette Heyer in junior high school and was captivated by the glittering world and witty language of Regency England. That delight led her to study English literature and travel widely in Britain and Europe. Her historical and contemporary romances have been published in Sweden, Italy, England, Denmark, France, Russia, Latvia, Slovenia, and Spain, as well as the U.S. Twenty-six of her new and backlist Regency romances are being published by Sourcebooks. Jane has been nominated for a Career Achievement Award by RT Book Reviews. She is currently rather nomadic.