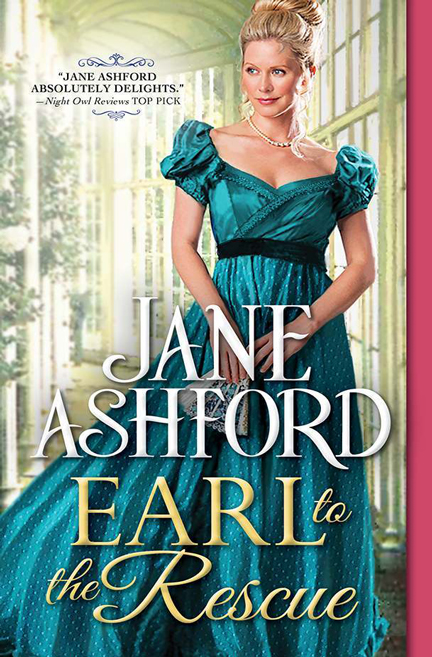 A beloved Regency romance from Jane Ashford, now available after over 25 years! Who needs a knight in shining armor when there’s an earl at your side…?

Alone in her bedchamber later in the day, Gwendeline thought over what the countess had told her. Why had such a sought-after gentleman, the type her father had called a real out-and-outer, taken an interest in her? Why had he been the one to come and fetch her, or the infant he said he’d expected? If he was a leader of the ton, and Gwendeline saw no reason to doubt his mother’s description of his position, what was his interest in her? Friendship with her parents seemed the only possible explanation, but he never spoke to her of them or appeared eager to answer when she tried to do so. Quite the opposite, in fact.

This thought reminded Gwendeline of a series of odd remarks she’d caught since coming to town. Both Lady Merryn and her son had made references she didn’t understand to her “situation.” Gwendeline hadn’t been aware that she possessed a situation in the sense that they used the word; seemingly, it was an awkward one. And she was becoming more and more interested in finding out exactly what it involved. She didn’t relish the thought that the people surrounding her knew more of her circumstances than she, especially since the knowledge must be widespread. Gwendeline’s chin came up. She was determined to find out the truth and not to flinch from it if it turned out to be unpleasant. Anything was better than this uncertainty.

But no opportunity presented itself in the following days, and thus, as Gwendeline stood beside Lady Merryn in the drawing room doorway three weeks later, ready to meet their guests, she felt rather nervous.

She thought she looked well in a dress of white sarsenet; her hair was newly cut and dressed in a cloud of curls called a Sappho by Lady Merryn’s hairdresser. A silver ribbon was threaded through it, and she wore a new silver filigree bracelet, a gift from the countess for her debut, on her wrist. But as Allison called out the first names, and an elegant couple strolled languidly toward them, she wondered what these world-weary Londoners were thinking about her and what she would find to say to them.

An hour later, she was just as uncertain. The countess had introduced her to what seemed scores of people, and she had said “how do you do,” and smiled a great many times. The guests and their names were jumbled together in her mind, and she knew she would never remember what to call anyone. She thought that they’d looked at her with sharp curiosity; indeed, sometimes she’d felt ready to sink under a particularly piercing glance. She longed to sit down for a moment away from the crowd and gather her thoughts.

“I think we can leave the door now, Gwendeline,” said Lady Merryn. “I can greet latecomers inside, and we must give you a chance to become better acquainted with our guests. Come along.” But as they were turning, the Earl of Merryn was announced, and they held back to greet him.

“Alex,” cried his mother. “I’d nearly given you up. You promised you’d come early tonight.”

The earl raised his eyebrows. “But Mother, I am come early. I haven’t arrived at an evening party before ten in years. Your guests will consider it a great compliment.”

His tone annoyed Gwendeline. “Perhaps we should be grateful that you came at all.”

“Indeed you should, Gwendeline,” he replied. “I never attend come-outs. They are uniformly dead bores.” She stifled a tart rejoinder as he went on. “You’re looking delightful. You’ve done an excellent job of fitting her out, Mother.”

Lady Merryn smiled complacently. “She does look well, doesn’t she?”

“I chose my own clothes, sir,” Gwendeline snapped. “I’m not a child.” She faltered. “Of course, I’m very grateful for your help, Lady Merryn, I didn’t mean…”

“Shall we go in?” said the earl, smiling. He offered each lady an arm. His mother accepted, smiling. Gwendeline hesitated but could see no way of avoiding entering the party on his arm. As usual, she was forced to fall in with his plans.

They paused just inside the drawing room doorway. The large space seemed completely filled with people. Heads had turned to look at them, and she knew that the subject of many conversations must be herself, a daunting thought.

The countess stopped to speak to a friend, and Gwendeline continued into the room on Merryn’s arm. A couple left the sofa against the near wall as they advanced, and the earl guided her toward it. “Shall we sit for a moment?” he asked, handing her to a seat. She sank gratefully onto the cushions. He sat beside her and smiled. “You look a trifle uneasy,” he said. “You don’t find your first London evening party altogether pleasant?”

“To be honest, it’s more frightening than pleasant,” said Gwendeline. “Your mother has been so kind and gone to such trouble for me, but I have no idea what to say to any of these people, and the thought that they have all come to see what I’m like is terrifying.”

The earl laughed. “Many of them would be very pleased and flattered to hear you say so.”

“Are they such horrid people,” wondered Gwendeline, “that they enjoy frightening strangers?”

“They enjoy their power to do so, a great many of them.” He looked over the crowd with some contempt. “However, you needn’t fear the ton. It will find you charming.”

“Because you tell it to, my lord?” asked Gwendeline, remembering what his mother had told her.

“Yes,” replied the earl simply. “And there is no conceivable reason for you to look daggers at me because of it. I never asked anyone to care what I thought. Perhaps that’s why they do so.”

Jane Ashford, a beloved author of historical romances, has been published in Sweden, Italy, England, Denmark, France, Russia, Latvia, and Spain, as well as the United States. Jane has been nominated for a Career Achievement Award by RT Book Reviews. She lives in Los Angeles, California. Follow her at www.janeashford.com.