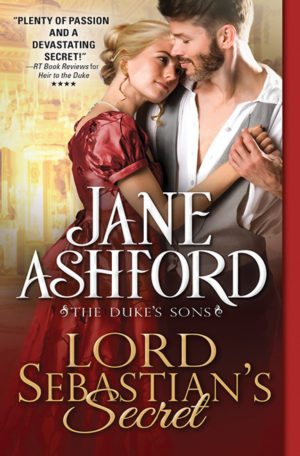 He’s hidden this shameful secret all his life…

Lord Sebastian Gresham is a battle tested soldier and brilliant strategist.  Yet all his life he’s had to hide his complete failure to decipher letters. In his own mind, he’s just stupid. What a miracle it is that he’s found the perfect bride. Lady Georgina Stane is beautiful, witty, and brilliantly intelligent. Sebastian is head over heels in love, proud as a peacock, and terrified. But if she finds out his secret, he’ll lose her love forever.

We’ve reached volume three, Lord Sebastian’s Secret, out on January 3. The military Gresham brother’s story turned out to be quite a romp. On a visit to his betrothed’s family, Cavalry major Sebastian faces a plethora of impertinent pugs, ubiquitous younger sisters, and a prospective father-in-law dedicated to ancient Saxons and arcane philosophy. Very much not Sebastian’s forte, for several reasons. Fortunately, there’s the lovely Georgina, who makes any amount of adaptation and effort worthwhile. Sebastian would do anything for her, and he very nearly does!

I really like the Gresham family. I’m feeling sad right now as I finish the fifth and final volume about them. I kind of hate to let them go. Should I consider revisiting the clan in future? Hmm. Is there anyone from the stories you’d really like to see again? Get in touch and let me know.

And thanks so much for reading! He’s hidden this shameful secret all his life…

Lord Sebastian Gresham is a battle tested soldier and brilliant strategist.  Yet all his life he’s had to hide his complete failure to decipher letters. In his own mind, he’s just stupid. What a miracle it is that he’s found the perfect bride. Lady Georgina Stane is beautiful, witty, and brilliantly intelligent. Sebastian is head over heels in love, proud as a peacock, and terrified. But if she finds out his secret, he’ll lose her love forever.

Sebastian closed his eyes and gritted his teeth. He could all too easily picture the astonishing news that he had eloped running through his family—the letters flying back and forth, the disbelief and consternation. The surreptitious brotherly smirking. An image of his mother’s astonished face made him wince.

“Some people think I don’t care about convention,” muttered the marquess. “Not true. And this was too much. An elopement!”

“Except that it wasn’t, Papa,” Georgina pointed out. “It was an unfortunate accident. I think you might have had more faith in my character.”

Frowning at the floor, the older man said something too softly to be heard. Sebastian thought it might have been, “It wasn’t you I was worried about.”

“The duchess is sending your brother,” said Georgina’s mother. She tried to speak blandly, but Sebastian got a clear sense of a woman getting the better of an argument at last.

The marquess glared at the group with a mixture of defiance and contrition.

Sebastian groaned softly. If anything could have killed his appetite at this point, the news that a brother had been dispatched to sort him out would have done it. He supposed this was his mother’s idea of just retribution for what she probably characterized as “antics.” She would have known that he would never elope.

If she’d had to send a brother, she could’ve drafted Robert. He’d have made a joke of the whole matter and charmed everyone so thoroughly that they saw it the same way. Alan or James might have refused to be embroiled in such a tangle at all. Nathaniel was still on his honeymoon. Mama couldn’t order him and Violet about quite so easily, anyway.

Randolph, though. Sebastian nearly groaned again. Randolph was usually glad for an excuse to take a few days’ leave from his far-northern parish. And he positively delighted in helping. Sebastian supposed that was why he’d become a parson. Part of the reason. He’d also been asking “why” since he could speak. According to family legend, that had been the first word Randolph learned. Sebastian certainly remembered being followed about by a relentlessly inquisitive toddler.

Nathaniel, a responsible six-year-old, had become so tired of saying he didn’t know that he’d taken to making things up. Sebastian still sometimes had to remind himself that discarded snakeskins were products of reptilian growth rather than intense surprise. Sebastian smiled. Randolph had spent several months trying to startle snakes out of their skin after that tale.

Then Sebastian’s smile died, and he put down his last sandwich. Randolph would revel in Mr. Mitra and the marquess’s lectures on reincarnation. There would be no end to his questions, or to the incomprehensible discussions after the ladies had left the dinner table. Sebastian only just resisted putting his head in his hands.

Georgina was looking at him, though, her expression anxious. He tried a reassuring smile. From her response, he judged that it was only marginally effective. He bolstered it, vowing to deal with Randolph. He would face anything to save her distress.

Georgina stood, holding her still half-full plate to her chest. “I believe I’ll go to my room now,” she said. “I’m quite tired.”

Her father looked guilty, her mother approving. Sebastian wondered at the determination on her face. It seemed excessive for a walk up a few steps. Was her leg hurting? One look at her father told him he would not be allowed to assist her to a bed.

Night had deepened by the time Georgina managed to hunt down Hilda and corner her in a little-used reception room, where she’d apparently been holed up for a good while, judging from the cake crumbs. Georgina stationed herself between her youngest sister and the door and confronted her with hands on hips. “Have you lost your mind?” she demanded.

For a moment, it seemed that Hilda might deny everything, but then she slumped back on the sofa and let out a long sigh. “I only meant to leave you overnight, but everything went wrong from the very first. Whitefoot didn’t like being led. He jerked the rein right out of my hand and ran away. I had to take your Sylph to the Evans farm before I could chase after him. It took hours before I got him there as well.” She paused and looked indignant. “Emma abandoned me! She turned tail and rode home. And she’s been practically hiding in her bedchamber ever since.”

“Perhaps she feels a sense of remorse for having done something absolutely outrageous,” Georgina suggested.

Hilda wrinkled her nose. “Well, we came back first thing the next morning to get you.”

“That does not excuse…”

“And you were gone!” Hilda actually dared to look reproachful. “As if you’d vanished into thin air.”

“If you had just waited, or only walked a little way along the trail, we would have found you. And there wouldn’t have been such a very great fuss. Why didn’t you? How could you be so clumsy as to fall into a gully?” Hilda cocked her head. “I never even knew it was there.”

“Don’t even dream of blaming this on me!” Georgina gazed at her sister. They were alike in coloring and frame, but apparently their minds ran on entirely different paths. JANE ASHFORD, a beloved author of historical romances, has been published in Sweden, Italy, England, Denmark, France, Russia, Latvia, and Spain, as well as the United States. Jane has been nominated for a Career Achievement Award by RT Book Reviews.

Enter to win one of ten copies of Heir to the Duke, the first in The Duke’s Sons series by Jane Ashford