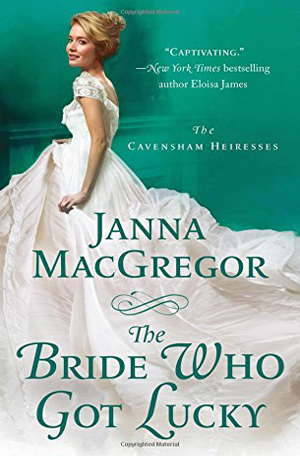 “. . . a heady mix of action, wit, and sexual tension. Readers will eagerly turn the pages to see how this intense story concludes.”—Publishers Weekly

We here at Romance Junkies LOVE The Bride Who Got Lucky, and we think you will too! Check out this amazing book and read the excerpt. It’ll get you hooked. The son of a cold-hearted duke, Nicholas St. Mauer isn’t one to involve himself in society…or open his own heart to anyone. But driven by honor, the reclusive Earl of Somerton feels obliged to keep a watchful eye on Lady Emma Cavensham. She possesses a penchant for passions unbecoming a woman that finds Nick in constant peril of losing his well-structured solitude. She even dared kiss Nick once—an utterly unladylike, and delightful, lapse…

Emma can’t deny the appeal of the earl’s attention, and occasional affection, but she has no need for a man. There are worse fates than spinsterhood, as Emma knows too well. She still mourns the loss of her dear friend Lena, and is determined to prove Lena’s husband responsible for her death before he lures another innocent woman into a brutal marriage. But as Emma pursues her prey, a compromising moment upends all her plans. Now, with gossip swirling and her reputation in tatters, Nick may be the only man brave enough to join in Emma’s cause. . .and fight for her heart.

With his back to her, the stranger blew out the sole carriage lantern that lit the interior. Then with a stealthy grace, he sat on the bench opposite of her.

Trouble had found her.

“Why did you extinguish the light?” Her voice quavered, betraying her unease.

Hidden in the shadows, he resembled some type of phantom, one who had settled into position ready to attack. He didn’t waste a glance as he removed his hat and threw it on the bench next to him.

“Who are you?” she repeated as a hint of hysteria nipped at her reserve.

“Lady Emma,” the man chided. “The light is out to lessen the chance someone might recognize you.”

The stranger’s rich but dark whisper intrigued her. Who was this mystery man who had taken control of her carriage? Short-lived, her curiosity faded when they passed by a streetlight.

“Lord Somerton,” she hissed. The night she wanted to stay hidden, the elusive earl who rarely ever showed his face in society found her. This wasn’t bad luck. This was fate playing a cruel joke and then laughing hysterically.

There was no denying he was breathtakingly handsome with his turquoise eyes and lithe stature. However, she couldn’t be bothered with his looks or with him—not tonight. The earl’s best friend just happened to be Claire’s husband. Her parents would know of her adventure before the night was over.

Her goose was cooked.

“I’m at your service, Lady Emma,” he drawled.

“I didn’t ask for your service. What do you want?” With a deep breath, she subdued the petulance in her voice. She had to save the evening and her book. All she needed was a little charm. “Lord Somerton, I apologize for my manners. You’ve taken me by surprise.”

Instead of heading straight, the carriage barreled through a sharp right turn causing her to slide across the leather seat. Certain a tumble to the floor was in her future, she braced for the fall.

With a gentle strength, he grabbed her around the waist, causing her to gasp. As if she were a fragile porcelain doll, he settled her on the bench.

“There’s no need. I promised I’d bring you home safe and sound, and I plan on accomplishing it.” He pulled the curtain aside for a moment. When he released it, he leaned back against the squab.

“Who asked you to bring me home?” She dreaded the answer but asked anyway.

“Your cousin and her husband,” he offered.

She released the breath she’d been holding. It’d be difficult, but she could convince Claire not to tell her parents. The unknown was whether she could trust Claire’s husband Pembrooke and the enigma sitting across from her.

She would salvage her evening. Somerton’s presence was nothing more than a slight hindrance, much like an annoying gnat.

“My lord, I appreciate the escort, but I’ve other plans. Is there some place I could have the coachman drop you? White’s perhaps?” Lud, her calm demeanor was astounding.

Bold action called for bold moves. If she told him her purpose, perhaps he’d leave her be. Surely, a man would understand the desire for a book. If he thought her a bluestocking, a woman who constantly had her nose in a book, it made little difference. She was going to capture her prize.

“I’m on my way to buy Bentham’s Essays, first edition. For over a year, I’ve been hunting for it.” In the darkness, she couldn’t see his expression, making it difficult to gage his response. If only he hadn’t extinguished the lantern.

“Have you thought of securing your book someplace else . . . more respectable? I’ve heard there are these shops called bookstores,” he teased.

She bit her lip to keep from lashing him with a verbal blistering. That would seal her doom. “Please, this is my only chance to make the purchase. I’ve sent inquiries to every bookstore within London to no avail. No one has it. Mr. Goodwin at Goodwin’s Book Emporium thought he had found a seller ready to part with their copy, but unfortunately, the seller changed his mind.”

“Goodwin?” he scoffed. “What the devil are you doing shopping at Goodwin’s? That’s not an acceptable shop for a young woman.”

Though she couldn’t see him, she sensed Somerton towered over her, his presence pushing her back into the squabs.

“Goodwin isn’t known for his selection of books.” He enunciated every word in a husky manner designed to frighten her. “His real business is selling information— he’s a snitch, and a very successful one at that.”

The impertinent Earl of Somerton would not intimidate her. She pulled herself forward to give him an appropriate set-down. Without warning, the carriage lurched, causing her forehead to bump his chin.

“Careful.” His hand cupped the back of her head as he pulled her close. His scent—clean, spicy, and male, one so different from the other men of the ton—wrapped itself around her like a binding. She didn’t move.