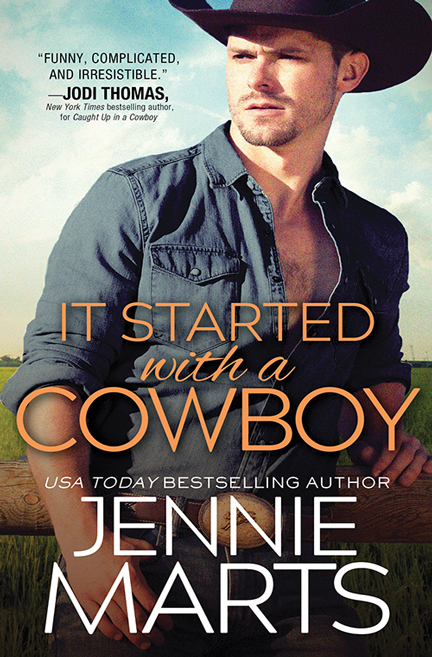 “Chemistry so electric it flies off the page.”—RT Book Reviews 4 stars for Caught Up in a Cowboy

IT STARTED WITH A COWBOY by Jennie Marts.

Colt James is back home on the family ranch, and he’s done taking risks. A car accident ruined his shot at a professional hockey career and messed up his love life, and he’s not taking a chance on anything that seems too good to be true. Especially not on Chloe Bishop, his nephew’s irresistibly charming teacher and the one woman he can’t stop thinking about… What will this cowboy risk for love?

Colt James is back home on the family ranch, and he’s done taking risks. A car accident ruined his shot at a professional hockey career and messed up his love life, and he’s not taking a chance on anything that seems too good to be true. Especially not on Chloe Bishop, his nephew’s irresistibly charming teacher and the one woman he can’t stop thinking about.

Chloe Bishop liked her life the way it was—orderly, structured and safe. Life goes from managed to messy when Colt talks her into helping him coach a hockey team of rowdy eight-year-olds. Being this close to the cowboy she’s crushing on is dangerous territory. But when a real enemy threatens Chloe, Colt will do anything to protect her. Even if it means risking himself—and his heart.

He passed her the towel, then turned his back. He should leave, he knew he should, but he couldn’t get his feet to move.

He heard the splash of water as she stood and stepped out of the tub. His eyes cut to the big mirror on the wall just in time to catch a quick glimpse of her wet, glistening body before she wrapped the towel around herself.

“You can turn around now,” she said, her voice timid and soft.

He slowly pivoted until he faced her again. It felt like something was happening here, and he didn’t want to ruin this chance. He opened his mouth to say something, anything. I like you. You’re beautiful. You have a great smile. I think you’re funny. Maybe best not to mention her sense of humor while she was standing practically naked in front of him.

Before Colt could think of the best thing to say to dazzle her with his wit and charm, his eyes fell on the top half of her arm and the row of purple bruises there. “Holy shit.” He crossed the bathroom and gingerly lifted her arm to examine the marks. Flares of rage sparked through him, and he wanted to kill Rank Johnson. “I will never let that bastard put his hands on you again,” he said through gritted teeth.

“I’m okay. They don’t hurt that bad. And it could have been worse. Much worse.”

She was right. Rank was as mean as they came, and she was lucky he hadn’t done worse to her or the kids. “He shouldn’t have touched you at all.”

“I know,” she whispered.

The scent of her skin surrounded him, and he was caught between wanting to wrap her in a blanket to protect her and wanting to pick her up and carry her to his bed. At this point, either option would work for him.

He lifted his hand, raising it to cup the side of her face. Tendrils of her hair tickled the back of his hand. “I’m so sorry this happened to you.”

She shook her head, just the slightest movement. Then she placed her hand on top of his and leaned her cheek into his palm. “I’m not. If it hadn’t happened, I wouldn’t be here with you now.”

This woman was going to flat–out kill him. He ached for her clear to the marrow of his bones. He leaned in, fully intent on capturing that pretty little mouth in a kiss, but he couldn’t bring himself to do it. He pulled back, shaking his head. “I like you, Chloe, but…”

Her face fell. Colt saw it and knew instantly that he’d blown it. Her shoulders shrank in, and she wrapped her arms around herself as if trying to cover the towel. “But not like that,” she finished for him. “I know. I get it.”

He shook his head. “No, I don’t think you do. I do like you, exactly like that. You’re all I’ve thought about for the past several months. And now you’re finally here, standing right in front of me, and I can’t do a damn thing.”

Her eyes widened, and she looked like she didn’t know if she should stay still or run—-like a dang deer caught in the headlights. A beautiful deer. He knew he was screwing this up. Of all the ways he’d imagined this moment would go, this hadn’t been one of them. He had to do something to save himself. As his dad used to say, it was time to fish or cut bait.

“Chloe, just listen. It’s not that I don’t want to…that I don’t want you. I do. And it’s killing me to say this, because I want you so bad, it freaking hurts. I want to kiss you and touch you. I want to take you to my bed and spend the whole day exploring every inch of your gorgeous body.” He let out a breath, his brows drawn together as if saying the words actually pained him. “But you’ve just been through this whole traumatic ordeal, and I want to give you time to heal. Someone hurt you, and I don’t want to be a jerk by not giving you the space you need. The last thing I want to do is make you feel uncomfortable. And I don’t want to take advantage of you.”

Chloe stood perfectly still, as if her feet were glued to the tile floor. A cool drop of water dripped from a tendril of her hair and trickled down the front of her neck and into the terry cloth of the towel. Her skin was so hot that she wouldn’t have been surprised if the drop had evaporated into steam.

She tried to take in everything Colt had just said. She wasn’t sure she’d heard it all over the rushing in her ears that sounded after he’d said he liked her exactly like that and had been thinking about her for months. Then why had he pulled away when she’d kissed him at the rink? Why hadn’t he kissed her back?

Oh, for flint’s sake, what the French toast was she doing wasting time analyzing what happened a few days ago? It didn’t matter now. What mattered were the crystal–blue intensity of Colt’s eyes and the passion behind his words. He’d said he wanted her, said he liked her.

His words touched her, and she could appreciate the sentiment, and the chivalry, behind them. But she wasn’t a victim. She wasn’t a poor, helpless woman who needed space. A flaming–hot cowboy had just told her that he wanted to take her to his bed and explore her body. That was what she needed. Not space, not coddling. Despite the chill of the wet towel, her body was on fire and she wanted him, needed him.

Something inside her snapped, the deep part of her that had been fantasizing about this moment. The part that had been dreaming this could come true. And she knew in her heart this was the moment she’d been waiting for—-her chance to risk something, to be daring and fearless. She’d never wanted anything as much as she wanted Colt James, and this was her chance to grab him. No guts, no glory.

I can do this. I just need to pretend to be someone else. Someone who is brave and daring.

Her eye caught the swish of Agatha’s tail from where she lay next to the vanity, and Chloe knew that was the answer. She needed to think like a cat. Cats were bold and didn’t care what other people thought. They took what they wanted; they were adventurous and playful. She wrenched up her inner feline, brought her to life, and steeled herself to play.

I am woman, hear me roar. Or at least meow very courageously.

She reached for the knot securing the towel around her chest as she raised her chin and offered him her most seductive stare. “I like you too. And I love that you don’t want to push me, that you want to give me space, but I don’t need space. I need you. And I want you to take advantage of me. Right now.” She inhaled a breath as she took a step back and released the towel, letting it drop to the floor.

Caught Up in a Cowboy (Book 1)

It Started With a Cowboy (Book 3)

Praise for Caught Up in a Cowboy:

“Funny, complicated, and irresistible. Sometimes a cowboy isn’t perfect but you got to love him anyway.” —JODI THOMAS, New York Times bestselling author

“An appealing story of love rediscovered…enjoy this tender tale.”—Publishers Weekly