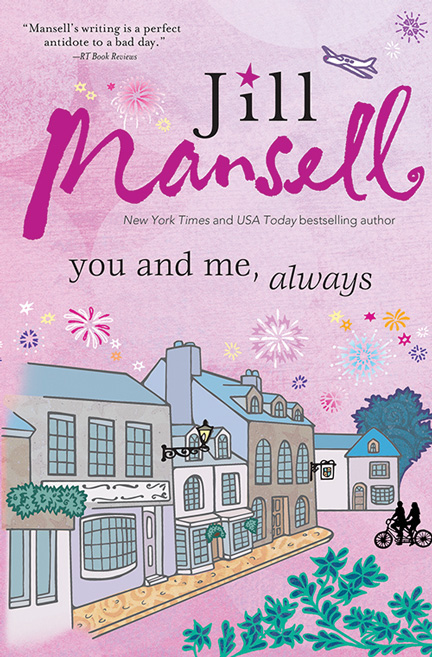 Nothing stays secret forever, least of all love…

On the morning of her twenty-fifth birthday, Lily Harper opens the very last letter written to her by her beloved mother, who died when she was eight. Learning about the first and only real love of her mom’s life is a revelation.

The same momentous day, Lily meets Eddie Tessler, an actor fleeing fame who could change her world in unimaginable ways. But her childhood friend Dan has his own reasons for not wanting Lily to get too carried away by Eddie’s attentions.

As secrets past and present begin to emerge, Lily’s not sure what—or who—to believe. But one thing is clear: in the beautiful Cotswold village of Stanton Langley, nothing will ever be the same again…

There he was, sitting in the sun outside the Star Inn. Lily slowed and parked the van outside Goldstone House, next to the pub. Dan saw her and waved, and her stomach tightened at the sight of him, as it always did. There was just something about the languid angles of his body, those long legs in black jeans stretched out in front of him, the tilt of his head as he chatted on his phone and laughed at something that had been said.

The tightening didn’t mean anything, though. Lily knew that. It had evolved as a kind of Pavlovian reaction, a habit that had become ingrained over the years simply because Dan Rafferty was so physically attractive. The good thing was that he knew he was attractive and traded on it shamelessly with all concerned—-so the idea of an actual relationship with him was the very last thing anyone in their right mind would want.

And since she was in her right mind, thankfully she was safe.

“Lily, Lily.” Dan’s eyes crinkled, and he pushed his dark glasses to the top of his head as she jumped down from the van. “My most favorite girl in the world.”

See? This was what he was like. “And you’re the most annoying boy.”

He was twenty–seven, two years older than she was. Technically, he might be a man, but when you’d known each other since childhood, the idea just seemed wrong somehow.

“You used to put frog spawn in the hood of my sweatshirt,” said Lily. “You’ll always be a boy to me. Where’s your car, anyway?”

“Over in Chipping Norton.” Dan had texted her earlier asking if she could give him a lift to go pick it up.

“Best not to ask. The usual, basically. Good wine and bad women. Well, one bad woman taking shameless advantage.” He gestured to the still–full cup of coffee on the table in front of him. “Are you in a big hurry, or can I get you a drink?”

Lily checked her watch. It was twenty past six. She’d spent the last three hours delivering a marble–topped table and a set of Victorian chimney pots to a customer in Chippenham, but work was now over for the day, and the rest of her evening was free.

“Go on then. I’ll have a Coke.” She joined him at the table, unsticking the back of her T–shirt from her shoulder blades and flapping the front of it to cool down her rib cage while Dan disappeared inside to order the drink.

When he returned, she took the glass and said, “Cheers, thanks. Why couldn’t Patsy give you a lift back to your car?”

“She’s out. Gone on a date. With a mystery man off the Internet.”

“No idea.” Dan shrugged. “That’s the whole point of him being a mystery. She didn’t want me to meet him.”

“Well, after last time with the chap from Chepstow, who could blame her?”

“Welsh William.” He shrugged. “That wasn’t my fault. He was the one who challenged me to an arm–wrestling match. He was just showing off, trying to prove how strong he was.”

“You could have let him win,” said Lily.

“Me?” Dan looked horrified. “Why? He was an idiot. Patsy wouldn’t want someone like him anyway.”

Which was true enough. Ah, well, maybe this new one would be an improvement. Lily swirled the ice cubes in her glass and took a gulp of Coke, then paused as her attention was drawn to a stocky man on a bicycle heading down the street toward them. He was wearing an orange cycling helmet that clashed with his red face and turquoise Lycra leggings. As his legs pumped the pedals, he appeared to be talking to himself.

By this time Dan had turned and was watching him too. It wasn’t until the man had drawn closer that they realized he wasn’t riding an ordinary bike. It was a tandem. Nor was he having a conversation with himself; he was loudly addressing his cycling companion behind him.

“…and in September of 2013…or it might have been October, come to think of it… Anyway, that was when I cycled from Ravenglass to South Shields alongside Hadrian’s Wall, and that’s one hundred and seventy–four miles in total, so it’s quite a trek, but the views were phenomenal… Then the following March, I did the Devon coast–to–coast, from Ilfracombe to Plymouth…”

“Whoops,” Lily murmured as the tandem drew nearer still and they were finally able to see who was on the back of it. Dan sprayed coffee and rocked forward on his seat. Clearly mortified as her companion continued at top volume, poor Patsy saw them watching and made an Oh God face.

And then she and the cyclist were passing the pub, their legs moving in unison as the pedals turned and the tires made a dry, swishing noise on the hot, dusty pavement. Patsy’s date was still facing forward, talking loudly for her benefit as he informed her of the importance of keeping up a nice, steady rhythm.

Which made Dan, predictably, crack up with silent laughter. As the tandem moved on, Patsy glanced over at them for a moment, shook her head in despair, and mouthed the words: Help me.

Oh dear, but it was hard not to laugh. At the junction at the end of the main drag, the traffic light turned red, and the tandem dutifully slowed to a halt. Lily and Dan watched as Patsy put her feet down and turned back to give them a look of mortification and misery, while her date continued his loud monologue.

“How does she get herself into these situations?” Dan marveled. He gestured to his sister and mimed diving sideways off the bike.

Up ahead, taking her weight on her feet and raising her bottom from the saddle, Patsy let go of the handlebars. The traffic light changed to amber, then to green. Her companion pressed down on the front pedals and the tandem moved off, leaving Patsy standing in the road behind it. Evidently still entranced by the sound of his own voice, and oblivious to the fact that he’d lost his pedaling partner, the man who’d been her date continued on down the road.

Dan took a quick photo on his phone before the tandem completely disappeared from view. He grinned at Lily and said, “Ha, brilliant. That’s this year’s Christmas card.”

Patsy stood in the center of the road and watched as Derek energetically cycled off without her. She couldn’t quite believe he hadn’t noticed she’d gone.

Why did this kind of situation always seem to happen to her? Derek had sounded so nice in his emails. He’d given her no cause whatsoever to suspect he was a secret cycling fanatic with a deep and detailed knowledge of every single bike path in the UK and a passion for sharing all this information with her in a maximum–volume, never–ending monotone.

If she’d known, the entire relationship could have been nipped in the bud before it even had time to become a bud. Some women might not mind the idea of sailing through life on the back of a tandem, but Patsy definitely wasn’t one of them.

She sighed and brushed away the loose strands of hair that were sticking to her forehead. And now Dan and Lily were beckoning her toward them, no doubt finding her predicament hilarious. What she should have done, of course, was to tap Derek on the shoulder, politely explain that they might as well give up now, then shake hands, say good–bye, and wish him better luck next time.

That would have been the normal way, the dignified way to go about it.

Oh God, poor Derek. She really shouldn’t have done that to him.

Then again, poor her.