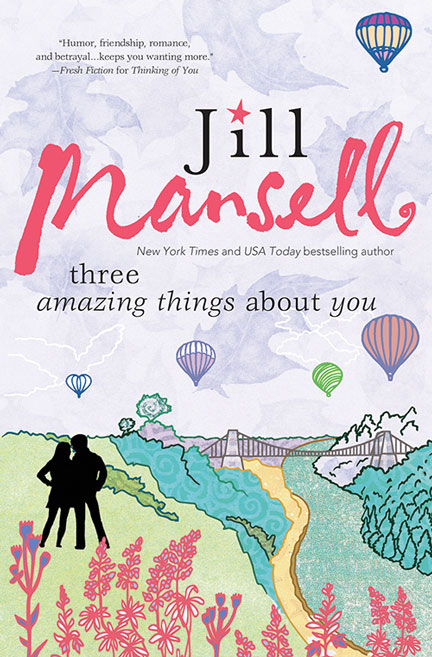 Hallie has a secret…doesn’t everybody?

Hallie doesn’t have long to live. And to make things even more complicated, she’s in love with a guy who’s seriously out of bounds. She’s never going to let him know, of course; she’s just going to enjoy every remaining moment of her crush. She’s also determined to spend her last months helping those who write into her Dear Rose column with problems of their own. Her doctors can’t fix her, but maybe she can fix a few other people’s dilemmas before it’s too late. Three Amazing Things About You by Jill Mansell

Hallie has a secret…doesn’t everybody?

Hallie doesn’t have long to live. And to make things even more complicated, she’s in love with a guy who’s seriously out of bounds. She’s never going to let him know, of course; she’s just going to enjoy every remaining moment of her crush. She’s also determined to spend her last months helping those who write into her Dear Rose column with problems of their own. Her doctors can’t fix her, but maybe she can fix a few other people’s dilemmas before it’s too late.

All our lives are full of choices, for better or worse. The amazing thing to see is how connected we all are—in ways we don’t even know. On occasion, we have the chance to see the ways we change one another’s lives for the better.

Pleased with herself, Tasha turned left and headed for the last shop. As she pushed open the door, her favorite Christmas song was playing and a blast of cool, deliciously scented air filled her lungs. She overheard a small girl say, “Mummy, look at that lady in the pink coat, she’s pretty,” and quite suddenly all was right with the world. A wave of joy enveloped her. This afternoon she was flying off to see her mum in the South of France and they would spend Christmas together…what could be more perfect than that?

Twenty minutes later, all was no longer right with the world and icy fingers appeared to be closing around her heart, while her own fingers scrabbled desperately for the third time through her handbag and pockets.

“It’s here somewhere. It has to be here. I had it in the last shop…”

The line behind her had already begun to tut with irritation at the delay.

“Better see if you left it there, then,” said the singularly unsympathetic girl manning the payment desk.

“But I know I didn’t leave it behind. I had it in my hand…” It was impossible to mentally retrace your steps when Slade were bellowing MERRY CHRIIIIIIIISSSTMAAAAAS out of the speakers and you were gripped with panic.

The man behind her in the line said loudly, “Excuse me, my parking meter’s about to run out. Can I pay for my stuff?”

“Yes.” The girl behind the till pushed Tasha’s items to one side and reached for the next customer’s basket.

Oh God, where was her credit card? What had she done with it? Feeling sick, Tasha searched through her pockets again. Three days ago, her debit card had snapped in half when she’d stupidly used it to clear ice from the car windscreen, and the replacement hadn’t arrived yet.

And now her credit card had vanished. Nightmare, nightmare. “If it’s been stolen, you need to cancel it,” a woman in the line reminded her.

Images of the card falling to the ground and being stealthily pocketed filled Tasha’s brain. They could rack up so much money on it, even in just twenty minutes. She nodded and said, “I don’t know the number to ring to report it stolen.”

“Nor me,” said the woman, adding helpfully, “but I know it’s printed on the back of your card.”

Gathering up her bags, Tasha turned and hurried out of the shop. When she’d been struggling to carry everything in M&S, she’d given up trying to fit the card back into her overstuffed purse. It was all coming back to her now; she’d slid it into one of the plastic bags instead. Her heart galloped into optimistic overdrive at the realization that the shopping bag was one of those she’d discarded during her Tetris-style reorganization.

Which meant, fingers crossed…it should still be in the trash can.

Out of breath and panting, Tasha stood and stared at the trash, relieved that it hadn’t been emptied but slightly put off by the amount of junk that had been crammed in since she’d left it, not least the upended polystyrene container now dripping the remains of an unwanted doner kebab over the items beneath it.

Life would be easier too if it could have been one of those topless cans that were open to the elements. But no, this was the rectangular kind with an enclosed roof and letter-box openings around the side. Although luckily a bit wider than an actual letter box.

Oh well, better get on with it. Tasha put her many bags down on the pavement, removed her pink woolen coat and rolled up the sleeves of her black dress…

Eurgh, this was truly gross. Within seconds her hand was gluey with chili sauce, there were bits of shredded lettuce stuck to her bare arm, and an upside-down McDonald’s cup was spilling melted ice cream over her too. There were cigarette butts in there, vinegar-soaked chips, and something repulsively slimy and unidentifiable.

“Hungry, are we? If you’re that desperate, I’ll buy you a burger!”

Fabulous, just what she needed. A gaggle of teenage boys with skateboards and micro-scooters had gathered round to watch.

“I saw an old drunk bloke puking up in that can earlier,” one of the boys called out.

“He had a piss in it too.” His friend, joining in, caused the rest of them to crack up.

OK, that wasn’t true, they were just saying it to wind her up. Pointedly ignoring them, Tasha knelt down and leaned against the icy cast-iron trash can, pushing her arm further into its grim depths. The boys were still snickering, other shoppers were stopping to stare and she was floundering helplessly in the dark, trying to feel for a lone credit card inside a scrunched-up plastic bag…

“Could you get your hand out of there?” barked a hatchet-faced woman holding a coffee cup.

“I’m just looking for something.”

Too late: the woman had already lobbed the cardboard cup into the trash, leaving Tasha with an arm drenched in lukewarm cappuccino.

Under her breath she muttered, “And a very merry Christmas to you too.”

“I bet there’s dog crap in there an’ all.” The boys were by this time helpless with laughter, competing to come up with more and more stomach-churning ideas. One of them had started skateboarding in circles around the trash can, and the sound of the wheels whizzing menacingly round her feet, missing her by inches, was making it all that much harder to bear.

It was an in-control voice, belonging to someone not remotely fazed by a bunch of hoody-wearing teenagers and effortlessly taking command of the situation. Since it was coming from directly behind her, Tasha couldn’t see the owner of the voice, but she was certainly glad he’d turned up.

With over ten million copies sold, New York Times and USA Today bestselling author JILL MANSELL writes irresistible, funny, poignant, and romantic tales for women in the tradition of Marian Keyes, Sophie Kinsella, and Jojo Moyes. She lives with her partner and their children in Bristol, England.