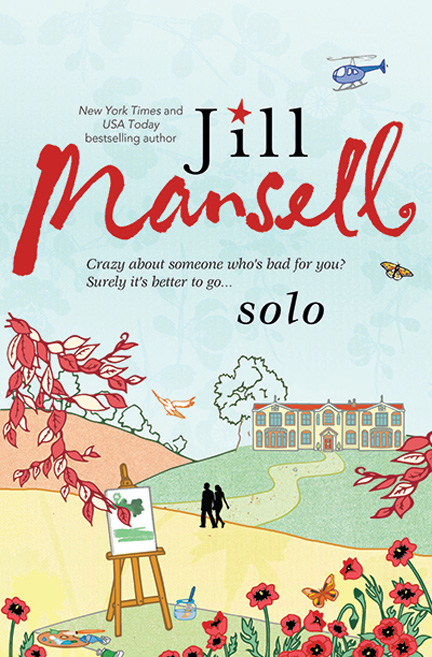 I started writing when I was 10 or 11 years old, and loved to create happy stories where nothing ever went wrong. Luckily for me and my publisher, I finally learned how to craft an actual plot, but it did take a while. I was working in a neurological hospital when I started writing in earnest, and it took several years before I found my own style of writing, which was romantic comedy. I was 32 when the first book was published and it was one of the most incredible moments of my life. It all starts at a party, as these things often do…

One fling follows another, and now the whole community is embroiled in a great big web of deceit, the untangling of which will charm you, amuse you, make you laugh and make you cry.

Whatever’s going on in your life, Solo by Jill Mansell is the perfect distraction right about now… I must be drunk, thought Tessa, kicking off her shoes and sinking into a sitting position on the edge of the vast, canopied bed. When a man like Ross Monahan urged you to spend the night at his place and assured you that you were quite welcome to the bed—he would be happy to sleep on the settee—you knew you were playing with fire.

Either drunk or crazy, she told herself as she pulled her dress over her head, threw it in the direction of a large, red-velvet chair and wrapped herself in the dark-blue toweling robe he had left for her.

But she knew she wasn’t that drunk. She was enjoying the game which had begun so many hours earlier. The challenge had been thrown down and she couldn’t resist it. She was going to seriously enjoy being the only woman in the history of the world to have slept in Ross’s bed…alone.

His suite of rooms on the top floor of the hotel was as sumptuous as she had imagined, particularly since seeing the rest of The Grange earlier. Like stowaways, they had remained closeted in the conservatory until the early hours of the morning when the last guests had departed, either roaring off into the night in their smart cars or retiring to their rooms in the hotel.

Then, taking her hand, Ross had given her the full guided tour, showing her the elegant sitting rooms, the restaurant, the squash courts, the superb gym and the spectacular indoor swimming-pool built inside a second, even larger, conservatory, illuminated by underwater lighting and surrounded on three sides by more tropical vegetation. Ross was as proud of the hotel as a new father. Tessa had been touched by his enthusiasm. But if he was under the impression that she would be so overwhelmed by this display of his success that she would leap into bed with him, he was going to be disappointed.

Saying no was much, much more fun.

Firmly securing the belt of the far-too-big robe around her waist, she threw back the bedcovers and slid between cool white sheets, just as a cautious knock sounded at the door.

“Pity,” said Ross lightly. He was still dressed, and carrying a folded blanket over one arm.

Tessa gestured at the bed. “This is awfully kind of you. You’ll probably have a terrible time trying to sleep on that settee.”

“Probably.” He gave her a mournful look, then grinned. “But I’ll survive.”

She watched him fling the blanket over the narrow leather Chesterfield. “And it’s four thirty now. Nearly time to get up again anyway.”

Tessa pulled the covers up to her chin and smiled at him. “You’re a true gentleman.”

She watched him hover for a few seconds beside the sofa, wondering no doubt if she might change her mind. Then, giving him one last big smile, she plumped up her pillows and turned over. “Mmm, well, thanks again. Good night.”

Tessa didn’t know what time it was when she shifted in her sleep and first realized that she was no longer alone in the bed. Her bare leg was resting against another bare leg, definitely not her own. Sleepily, almost subconsciously, she stretched out her hand and encountered a smooth, warm back. She became aware of the very faint scent of aftershave and toothpaste, and the quiet, regular breathing of someone deeply and peacefully asleep.

To her great surprise, Tessa was neither shocked nor annoyed by this invasion of her privacy. It was, after all, his bed and a narrow, slippery leather Chesterfield was about as conducive to a good night’s sleep as a tin bath.

In fact, she realized drowsily, she had forgotten quite how nice it felt to lie next to another body, accidentally brushing against an arm or a hip, sharing each other’s warmth and enjoying the primal instincts of simply being together.

With a guilty start she came properly awake. For the way her fingertips were trailing down Ross’s spine wasn’t in the least bit accidental. And, without even realizing it, her own left leg had managed to fit against the curve of his right one with all the snugness of a missing piece in a jigsaw.

This was taking the enjoyment of sharing each other’s warmth a little too far.

Regretfully easing her leg back to her own side of the bed and removing her hand from his back, she closed her eyes and attempted to distract her mind from its traitorous wanderings. She had always believed that physical intimacy—not just sex—was something like a video recorder or a Magimix: what you didn’t have, you didn’t miss, it just faded from your mind and became unimportant.

It had been almost a year since her last relationship had ended. At first, of course, she had missed the hugs and the kisses—and the sex—but certainly not enough to go rampaging round Bath in search of males, any males, with whom to satisfy the need for physical contact.

And pretty soon she had become used to being and sleeping alone once more. The withdrawal symptoms had been mild. Because hugging and kissing and sex weren’t physical addictions like heroin. They were something that was nice but also quite possible to live without.

On the other hand, a year was a long time.

With over 10 million copies sold, New York Times and USA Today bestselling author Jill Mansell writes irresistible and funny, poignant and romantic tales for women in the tradition of Marian Keyes, Sophie Kinsella and Jojo Moyes. She lives with her partner and their children in Bristol, England. Website | Twitter | Facebook

Win 1 of 5 Finished Copies of SOLO