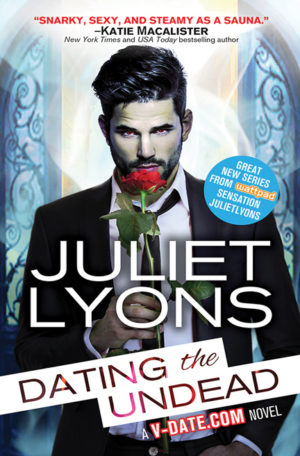 10 ways to tell if your date is actually a vampire

*Does not necessarily mean they are a vampire. Mortals—particularly males—are also prone to behaving in this way. Logan Byrne can’t get that sassy redhead—or that kiss!—out of his head. When his boss assigns him to spy on V-Date, he meets Silver again. Turns out, the police are recruiting humans to snitch on vampires through the dating site. As the snark and sparks fly, feelings between Silver and Logan deepen. But, when old demons resurface—literally—Logan isn’t sure he can shield either of them from the dangers that have been lying in wait for centuries.

I freeze in terror. What a waste of Dad’s money those self-defense classes turned out to be.

“Silver, it’s just me,” a lilting Irish voice says at my ear, the hand dropping from my shoulder.

I turn around to find myself nose to nose with my vampire from New Year’s Eve, his bright green eyes piercing mine.

I’m struck by several conflicting emotions all at once—anger, relief, and in a tiny measure—happiness. Anger wins out. On impulse, I slap him hard across the face, pointing with a white, clenched hand to the garden I’ve just sprinted across.

“I thought I was about to be murdered, asshole,” I hiss through my teeth. “I ripped my coat. My heels are ruined. All because you thought it might be fun to follow me home.”

He smirks, nonplussed, sliding his hands into the deep pockets of his navy pea coat. “I wasn’t following you,” he says, eyes twinkling.

“Oh, that’s right,” I say, voice dripping with sarcasm. “You were just walking me home again. Except this time from fifty yards behind and without me knowing.”

Before he has a chance to reply, the front door flies open and my landlady Vera emerges in a long, silky, oriental dressing gown. She is wigless for once, a Pucci scarf twisted into a makeshift turban covering her head. In her right hand, she holds a meat cleaver.

“Step away, you rapist bastard!” she yells, holding the large knife shakily aloft.

I glare at the vampire, expecting him to either throw his hands in the air or take a step backwards. Instead his brows knit together and his mouth drops open. “Etta Marlow?” he asks, staring at her as if she just walked on water.

The meat cleaver lowers a fraction. “What’s it to you?” Vera demands, her voice losing some of its previous menace.

I roll my eyes. Of course he remembers her. He’s probably seen all her films.

“It is you!” he erupts, wagging a finger in her direction. “You’re Etta Marlow! You played Susie De Sousa in Girl Uptown with Gregor Lane. I love that movie.”

The meat cleaver drops, forgotten, to her side as she pats her turban, eyelashes fluttering. “Fancy you recognizing me,” she mutters happily.

“Excuse me, Vera,” I interject, “but there’s still a potential rapist on your doorstep here.”

Vera looks back to the vampire, who shakes his head, smiling. “A misunderstanding, Etta. I was making sure Silver here made it home safely. She got the wrong end of the stick.”

Vera, or Etta as she was once known, glances over at me. “Do you know this charming fellow, dear?”

“Well then, you must come in, dear boy. I could show you my Oscar, if you like?”

The Vampire looks as if he’s about to pee himself with excitement. “You mean the one you got for Days Like These with Vic Stevens?”

She holds out a thin hand towards him, gold bangles jangling on her wrist. “The very one, dear. Come, come in.”

I watch, stunned, as he takes her hand, green eyes lit up in excitement.

Before stepping through the door, he hangs back. “Ms. Marlow, I’m afraid it’s only courteous to let you know before I enter that I’m not human. I’m a vampire.”

Vera’s tinkly laugh echoes around the street like a bicycle bell. “Oh, you’re so sweet. Didn’t you know I’ve met dozens of vampires? They’re two a penny in Hollywood, darling.”

Following her across the threshold, he flashes the cockiest of grins. “Coming, Silver?”

My jaw drops in disgust. I’m tempted to sulk off to my basement flat, but instead, I trail after them and slam the door.

We follow Vera along an elegant gold and cream hallway into her immaculate, monochrome front room. Even though I’ve been here on numerous occasions, I’m always mesmerized by the sheer extravagance of the place—buttery white leather sofas, cream fur rugs, one wall is painted black and white to resemble piano keys. It should look tacky, but somehow, it works.

“You two make yourselves at home whilst I go and make myself presentable.” Vera says. “Then I’ll dig out that old Oscar of mine.”

I know, of course, the Oscar will not have to be ‘dug’ out of anywhere. It’s always on display in the den, alongside her film stills and other memorabilia.

“I didn’t catch your name,” she croons to the vampire before she leaves.

He puts a hand on his chest. “Forgive me, I should have introduced myself. Between the meat cleaver threat and getting slapped by Silver here, I seem to have forgotten my manners. I’m Logan. Logan Byrne.”

For strange and unfathomable reasons, my stomach flips. Logan. It suits him.

As soon as Vera disappears from the room, Logan collapses into one of the white leather arm chairs and puts his crossed feet onto the cut glass coffee table.

I’m still standing, one brow arched, arms folded across my chest. “So, Logan,” I hiss. “What the hell is this?”

He grins, dimples putting in their first appearance of the night as he gazes up at me. “Did anyone ever tell you, you’re particularly beautiful when you’re angry?”

“Oh, cut the crap,” I say,  ignoring the hot flush climbing my neck. “Why did you follow me?”

“Like I told Etta, I wanted to make sure you got home safely, that’s all. Though I’m a little confused as to why you have three houses.” He holds up fingers to count. “The one I left you at on New Year’s, the one Nathaniel dropped you at, and now this—cohabiting with an aged 1940’s screen siren.”

“It’s none of your business,” I say, chin in the air. “And anyway, how do you know Nathaniel?”

He shrugs. “I know most of the vampires in London.”

In the blink of an eye, he is towering over me, face inches from mine. I inhale his clean, masculine scent like a drowning person coming up for air, and as he leans closer, I find myself gravitating towards him—a flower reaching for sunlight.

He pulls the collar of my coat aside and peers into the gap. As his fingers brush my jaw, an uncontrollable shiver zings through me. I disguise it by stepping out of reach and batting his hand away.

Before I realize what’s happening, he closes the gap between us. One hand cupping my cheek, he bends over, lips brushing the place Nathaniel bit me, tongue gently swiping the puncture holes.

“That should stop the bleeding,” he says, pulling away. “But you’ll still have a bruise in the morning.”

I rub my neck and look at my fingers. No blood. “So, you can heal wounds? Just another of your unique skills along with beating up drunk men and following young women home for kicks?”

He sinks back into the armchair. “You’re a sexy girl, Silver. I’m glad we’ve met again.”

I snort incredulously, trying, without success, to forget the warmth of his hand on my face. “Well, you certainly made sure we did.”

“And of course,” he continues, pretending to examine a photo on the coffee table. “I’m hugely flattered I’ve managed to turn your head towards my kind.”

“You didn’t turn anything,” I say tartly.

He cocks a brow, gaze burning through my clothes like a laser. I feel a sharp twitch between my legs, as though he’s controlling my private areas by some invisible string. “Are you sure about that?” JULIET LYONS is a paranormal romance author from the UK. She holds a degree in Spanish and Latin American studies and works part-time in a local primary school where she spends far too much time discussing Harry Potter. Since joining global storytelling site Wattpad in 2014, her work has received millions of hits online and gained a legion of fans from all over the world. When she is not writing, Juliet enjoys reading and spending time with her family. Visit: www.julietlyons.co.uk