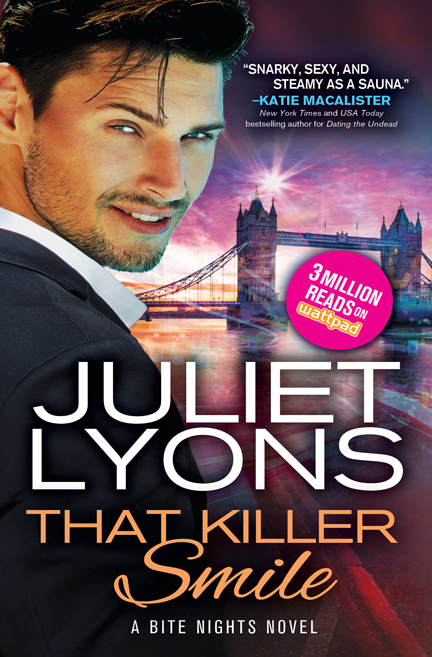 In Juliet Lyons’s THAT KILLER SMILE, vampire Catherine Adair gave up trying to find her perfect match ages ago. But that didn’t stop her from founding London’s super successful vampire dating site. When a smoldering vampire overlord from her past launches an interspecies speed-dating service, Catherine vows to crush the competition…. THERE WILL BE HEAT…

Vampire Catherine Adair gave up trying to find her perfect match ages ago. But that didn’t stop her from founding London’s super successful vampire dating site. When a smoldering vampire overlord from her past launches an interspecies speed-dating service, Catherine vows to crush the competition….

WHEN THESE TWO COMPETE

Ronin’s new venture is purely about getting Catherine’s attention. He hasn’t stopped thinking about her ever since the night she gave him the cold shoulder. Nobody gets away from Ronin McDermott that easily…

For a few seconds, I’m lost for words. But as I stare between the bag on the floor and Ronin’s chiseled face, it all becomes clear.

“This is about you wanting me to owe you, isn’t it?” I hiss, fixing my gaze on his left ear. It’s a trick I learned from the last time we met. If I don’t look directly into his eyes, there’s less chance of being drawn into their swirling, blue depths.

He smiles, shaking his head. “You’re unbelievable, do you know that?”

“Pfffft,” I erupt. “I’m unbelievable? I’m not the one trying to tank my business by spreading rumors and launching a dating service. I’m not the one going out of his way to ensure our paths keep crossing in the worst possible ways.”

He frowns, displaying the first sign of irritation since I crashed into the room. “I’ve already told you, mo chridhe, it wasn’t me who started those rumors. And as for the speed dating, well, it was a free country last time I checked. I’m offering you the cash because the fella was injured in my club. Which means technically he’s my responsibility. If you don’t take the money now, I’ll have someone deliver it to his lawyer’s office later. I have their address now, after all.”

He waves the letter in the air like a victory flag.

“I’ll call them up,” I blurt out, voice quavering. “I’ll tell them you’re a madman and not to accept it. I’ll say it’s not your money at all, that you conned the life savings from some poor old man with dementia.”

Ronin arches a brow, tucking the letter into an inside pocket of his jacket. “That’s some novel you’re writing there, Catherine, but I doubt they would argue if I write them a Coutts check, do you?”

I’m all out of ammunition. “I loathe you.”

For a split second, his cocksureness wavers, the steely-blue eyes darkening. But only for a moment. “The problem isn’t me, Catherine,” he says, edging closer. “The problem is you.”

I straighten up. “That’s the most irritating thing about you, Ronin—you always think you know better than everybody else. I’m not sure whether it’s because you’ve been around longer than the rest of us or because you’re just a massive asshole. Either way, you don’t know the first thing about me.”

He flashes a cocky grin, raking his gaze over me as if he has X-ray vision. “You don’t loathe me, mo chridhe. You just can’t get over the fact you’re an uptight puritan who loved the kind of sex I gave you that night we spent together.”

I let out a high-pitched laugh. “That’s right, Ronin. Let’s not forget for one second that the world revolves around you and your penis. Actually, I’m surprised you’re even bothering to get dressed these days. I would have thought you’d have developed a penchant for silky, red pajamas and slippers by now.” I motion to the cigar on the carpet. “Looks like you’ve nailed the smoking part, and God knows the Playboy bunnies must be hiding around here somewhere.”

“Please, you’re not that good in bed.”

Except he is—or was. Better than good. But I can’t think about that right now. Or ever again, actually.

“Paulo was right about you,” he murmurs. “You are a mad bitch.”

I close the distance between us in a single stride and smack him across the cheek. It’s like hitting stone. He doesn’t so much as flinch. For some bizarre reason, this ignites a hot stab of lust in the pit of my stomach. His scent—a masculine blend of whiskey, leather, and woodsmoke—infiltrates my senses. I’m transported back to that night some years ago when we went at it like two wildcats in his bed.

I never wanted to come up for air.

I’m standing too close to use the ear trick. His eyes drag me in, two penetrating blue flames, dark with anger. I gulp, allowing my gaze to wander over his chiseled-from-rock cheekbones, rosy Celtic skin, copper hair slicked back from a noble forehead. He may be an asshole, but there is no denying his beauty.

For what feels like an eternity, neither of us move. We remain locked onto each other, energy—good and bad—swirling between us like thick fog.

Quite without thinking, I hiss, “Fucker.” After spending my human life afraid to speak, I never managed to rewire the connection between my brain and mouth.

His blue eyes flash. At once, his lips are on mine and his arms are around my waist. Instead of struggling, I mold myself into the hard contours of his body, my tongue sliding over his, my hands pulling him closer, and I hate myself—Lord, how I despise myself—for how good it feels. It’s as though he brings a magnifying glass up to all the base urges I long to forget, including this—an utterly ridiculous sexual attraction to a demon playboy who’s murdered God knows how many during his thousands of years on earth.

I don’t pull away. I can’t. He absorbs me like a drug. Before I can help myself, my fingers are tangled in his thick, red hair and I’m allowing his hands to cup my ass, grinding against the hard rope of an erection bulging beneath his trousers. We devour each other, eyes and mouths open, until I’m no longer sure where he begins and I end.

But then he takes his mouth from mine, trailing kisses from jawline to neck. Along with the rasp of stubble, I feel a scrape of fangs, sharp as knives, glide across my skin. I shove him away, panting slightly, averting my eyes to the lacquered walnut desk in the center of the room. If I don’t stop this now, I’ll end up sprawled across that table just like all the other women he’s had in here. The worst part is, I’d enjoy it.

“Consider the debt paid,” I say.

Enter to win a copy of the first book in Juliet Lyons’ Bite Nights series, Dating the Undead

JULIET LYONS is a paranormal romance author from the UK. She holds a degree in Spanish and Latin American studies and works part-time in a local primary school where she spends far too much time discussing Harry Potter. Since joining global storytelling site Wattpad in 2014, her work has received millions of hits online and gained a legion of fans from all over the world. When she is not writing, Juliet enjoys reading and spending time with her family.