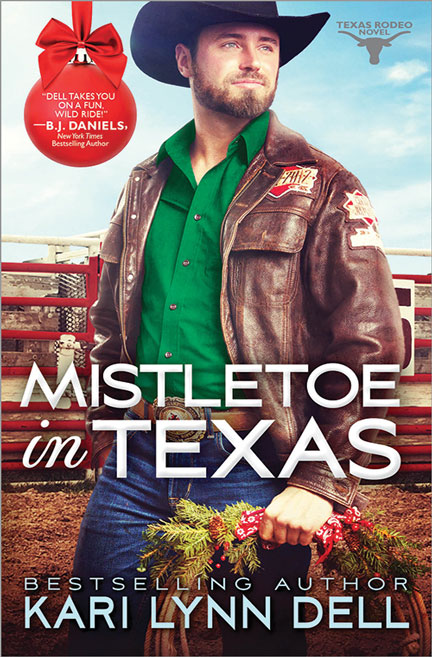 In Kari Lynn Dell’s Mistletoe in Texas, rodeo bullfighter Hank Brookman was headed straight for the top. But after a single misstep resulted in a devastating injury, he disappeared under a mountain of regrets. Now he’s back, ready to face the loved ones he left behind—starting with the one girl his heart could never forget. He’s always been the black sheep: the troublemaker.

But this Christmas, the prodigal cowboy returns.

Rodeo bullfighter Hank Brookman was headed straight for the top. But after a single misstep resulted in a devastating injury, he disappeared under a mountain of regrets. Now he’s back, ready to face the loved ones he left behind—starting with the one girl his heart could never forget.

When Hank stormed out of Texas, he left Grace McKenna picking up the pieces…and struggling with a secret that changed everything. He may be back looking for redemption, but after everything they’ve been through, how can she admit what he really walked away from all those years ago?

Hank always knew persuading Grace to trust him again would be a tall order. Convincing her they deserve a happily ever after? That may take a Texas-sized Christmas miracle.

When Steve and Johnny pulled into the driveway, everything at the Brookman ranch seemed fine. A warm front had pushed in overnight and the horses dozed in the sunshine, their feeder full of hay. Hank was nowhere in sight, though, and neither were the dogs.

“Where do you suppose he ran off to?” Johnny grumbled, after they’d checked in the barn and around the corrals.

“Sanchez Trucking,” Steve said. “He mentioned to Cole yesterday that he’d reserved a repair bay this afternoon to swap out the wheel bearings on your pickup.”

Johnny glared at him. “You knew he’d be gone.”

“Hell yeah. Did you figure I’d toss the two of you together after what happened last time?”

Johnny cringed. Almost exactly three years ago, Hank had strolled into the Corral Café as casual as if he’d only been gone a day, not six months. And Johnny had been so shocked that the first words out of his mouth were “What the hell do you want?”

To say the conversation had gone downhill from there would be a massive understatement.

“If you’re so sure it’s gonna be a wreck, why did you hire him?”

Steve sighed. “The doc says you have to be in that sling for a month. You had to hire someone. And we were hoping this might be the shove you both needed to work things out.”

Was that why Hank had accepted? Did he want to come home? Johnny couldn’t imagine why, but he was rapidly losing the ability to think at all. The ache in his broken collarbone had grown teeth, and he was wiped out from a stroll around the yard. He sure as hell wasn’t up to butting heads with his son.

“I want to grab a few things from the house,” he said stiffly.

But when Steve opened the door, Johnny smelled food, and the mouthwatering scent of roasting beef was coming from his oven. As he stepped out of the mudroom, the figure at the stove turned…and his jaw dropped.

There was a woman in his house. A beautiful, copper-skinned, black-haired woman in faded jeans and a bright-pink shirt that matched her toenails. And if he wasn’t mistaken, she had been dancing to the music playing on the radio.

Barefoot. In his kitchen. And cooking actual food.

She smiled, amused by his goggling. “You aren’t the Brookman I was expecting.”

But she must have seen them drive in and watched them walk around. And had plenty of time to prepare herself—unlike Johnny. Now that his eyes had adjusted, he realized she was older than he’d first thought. Closer to fifty than forty. But who…

Her red-painted lip curled. “Not that kind of friend, but I’ll take it as a compliment.”

Steve stepped around Johnny and extended a hand that swallowed hers, even though she was taller than average and what you might call strong-boned if you were trying not to notice her curves. “I’m Steve Jacobs. Sorry for barging in. We didn’t see a car outside.”

Wait. Was Steve apologizing because Johnny had walked into his own home without knocking?

“Hank has told me all about you.” Bing clasped her other hand over Steve’s with a smile so dazzling it was like a flashbulb going off. “And I don’t have a car. Gil picked me up from the airport and brought me out.”

Now that he’d regained a few of his faculties, Johnny realized this had to be the woman Melanie had told him about. The one who’d fetched Hank from the hospital in Yakima and all but adopted him.

“Ah. You must be from Montana?” Steve guessed, in the absence of any attempt at conversation from Johnny.

“What are you doing here?” Johnny blurted, then winced. Real smooth, Brookman.

Head cocked, arms folded, she inspected him from head to toe. She didn’t look particularly impressed. “It took me nineteen months to undo a fraction of what you did to that boy. I don’t intend to let you screw him up again.”

Steve made a choking noise that might’ve been laugh­ter. Nice that someone was getting a kick out of this. “Did you find a place to stay?” Steve asked, deploying his south­ern manners to fill the charged silence. “There are football playoff games in Dumas and Canadian this weekend, so it might be hard to find a motel with a vacancy.”

Sunlight from the window caught in the inky-black spikes of her short hair as she glanced around, then back at them. “Melanie said I could use her room.”

Here? She intended to plant herself in Johnny’s house? With Hank, and with Melanie’s blessing. Damn it all, they were ganging up on him.

“How long are you staying?” Johnny choked out.

“Until you’re back on your feet.” That dark gaze pinned him to the wall, and she all but bared her fangs. “Or you say one word to Hank that doesn’t sit right with me.”

Johnny was set back on his heels by her outright hostility. Not much question whose side she was on. He fought the bizarre urge to laugh. Wouldn’t you just know it? There was finally a woman his own age in this house again, and she hated his guts.

And this one wasn’t even married to him.

“We should be going,” Steve said.

“I’ll let Hank know you stopped by,” she said.

As if this was their place, and Johnny was the intruder. The hell with that. “I’m staying.”

He had the satisfaction of seeing her eyes go wide.

Steve swore under his breath.

Bing just raised those perfectly sculpted eyebrows. “Go ahead, make yourself at home.”

“I will.” And before his knees failed him completely, he strode across the living room, down the hall, and slammed his bedroom door behind him. He waited inside for a few beats, but Steve didn’t come after him.

But what now? Johnny couldn’t make her leave, and he couldn’t share a house with that woman. She’d prob­ably poison his coffee. But he’d have to figure it out later, because right now he had to get horizontal before he fell on his face. He lowered himself onto the bed and stretched out flat with a huge sigh. His bed. His pillow. Lord, he’d missed them. And as long as he was gonna act like an overtired brat, he might as well take a damn nap.

When he woke, his room was dark. He levered him­self out of bed and staggered to the attached bathroom. Even taking a piss was a major operation without the use of his left arm.

The house was dead quiet. Maybe that woman—what kind of name was Bing, anyway?—had left with Steve. But when Johnny cracked the door to Melanie’s room, he saw a suitcase on the bed, clothes spilling out along with a scent that made him think of exotic flowers and tropical nights.

He shuffled into the living room, lit by the lamp beside his recliner. Over on the bar he spotted a covered dish. He peeled back the foil and breathed a curse. She had unearthed Hank’s childhood Sesame Street plate from somewhere in the cupboards. One compartment held potatoes and gravy, the second carrots, and the third pot roast—all cut into toddler-sized pieces.

As he slid the plate into the microwave, he could see her laughing at him. But he wasn’t gonna waste good pot roast.