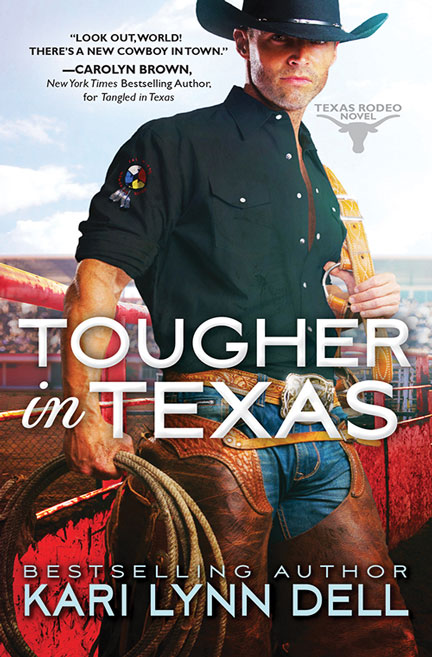 And she’s aiming to break them all

Rodeo producer Cole Jacobs has his hands full running Jacobs Livestock. He can’t afford to lose a single cowboy, so when Cousin Violet offers to send along a more-than-capable replacement, he’s got no choice but to accept. He expects a grizzled Texas good ol’ boy.

He gets Shawnee Pickett.

My Favorite Fictional Cowboys – For the Love of a Difficult Woman

I adore difficult women…and the cowboys who love them because of it, not in spite. You don’t get much more difficult than Shawnee Pickett in Tougher in Texas. And as Cole Jacobs learns, it only gets harder the closer you get to her. Under that brash, outrageous surface is one tough woman who’s gonna make you prove you deserve her…and that she deserves a happily ever after.

My two favorite difficult movie women aren’t known for westerns. Laura San Giacomo starred in the sitcom Just Shoot Me, and as Julia Robert’s wisecracking best friend Kit in Pretty Woman, but in between she turned in an incredible performance as Crazy Cora, who latches onto Tom Selleck in Quigley Down Under, insisting on calling him by her estranged husband’s name. Much of the humor is on the dark side and the film delves into some deep subject matter—including the systematic genocide of Australia’s aboriginal people and the source of Cora’s madness. San Giacomo flawlessly portrays everything from borderline slapstick to intense grief while being a near constant annoyance to Matthew Quigley—except when the chips are seriously down, which is why this Wyoming cowboy can’t help falling for her. And did I mention staring at Tom Selleck for a couple of hours doesn’t suck?

I have to reach even further back for my second difficult woman—Shirley McLaine in 1970’s Two Mules for Sister Sara, which marked the last time Clint Eastwood would take second billing in a major film role. The movie is set in Mexico during the 1860’s War of French Intervention, with Eastwood and McLaine assisting the rebel Mexican forces. He is also forced to become the reluctant savior and guardian, but it is clear that Sister Sara has her own agenda and no qualms about using this mercenary to achieve her ends. It’s no great surprise when the cigar-smoking sister’s habit turns out to be a disguise—which clears the path for an equally smoking romance—but he never gains the upper hand. You gotta love that about a female character in an early Eastwood western. You go, Sister. And now for an excerpt from Tougher in Texas, which features Shawnee in prime difficult woman form.

The parking Nazis attacked before Shawnee turned off her pickup. Red-faced and dripping sweat under their neon-yellow plastic vests, they waved their orange-painted sticks so frantically you’d think she’d landed a 747 in the contestant lot.

She rolled down her window. “Is there a problem?”

“You can’t park here,” the taller one declared, jamming his thumbs in his pockets and thrusting his beer gut at her.

Shawnee ran a deliberate glance around the clipped grass field, dotted with live oaks like the one she’d parked beneath. Four hours before the first rodeo performance, only seven other rigs had arrived, all lined up with military precision along the back fence. “Looks like there’s plenty of room.”

“There is now.” Beer Gut attempted to radiate pompous authority in a dime-store cowboy hat. “But it’ll get crowded once the rest of the contestants arrive. We have to keep it organized so no one gets blocked in.”

Shawnee gave him the closest thing she had to a polite smile. “Well, then, there’s no problem.I’m with the stock contractor. I’ll be here for the duration.”

“Oh. Then you belong over there.” The skinnier of the pair gave a dramatic wave of his stick, toward where the two Jacobs Livestock semis, an elderly travel trailer, and Cole’s rig were lined up near the stock pens. There wasn’t a tree within fifty yards.

“I don’t think so.” Shawnee turned off the pickup and opened her door, nearly clipping the big guy’s chin with the side-view mirror.

They both jumped back, then blustered along behind her as she strolled to the rear of the trailer to unload her horses. “You can’t just pull in and take the best parking spot!”

“Why not? My horses and I will be here all week. The contestants will come and go in half a day, at most.” She flipped the latch on the back door and swung it open. The flea-bitten gray in the rear stall cranked his head around to show her the whites of his eyes. Shawnee stepped aside and waited, holding the door wide.

“But…” Skinny began, then faltered, as if he wasn’t sure where to go with it.

“We got rules,” Beer Gut announced. “Contestants park where we tell them to park.”

“I repeat, I’m not a contestant.” A few tentative thuds sounded inside the trailer as the gray attempted to find reverse gear in the confined space. “And if I were you, I’d take a step back.”

Whatever wisdom he intended to impart was cut short by a clatter and a bang that rocked the entire trailer, then a huge thud as the gray took one big leap and missed the back edge of the trailer floor with both hind feet. His rear legs buckled from the twelve-inch drop that took him by surprise every single time. He plopped onto his ass, nearly squashing Beer Gut. The gray teetered on his haunches, looking shocked and perplexed, then flopped over onto his side. Shawnee caught the halter rope as the horse scrambled up and stood, legs splayed, quivering as if he wasn’t sure the ground would hold him.

“He has issues,” she told the goggle-eyed parking attendants. Among them, she suspected, a total lack of long-term memory. Or short-term common sense. The horse snorted and Beer Gut stuck out a hand to ward him off.

Shawnee slapped the halter rope into his palm. “Hold that, would you?”

He blanched like she’d tossed him a live cottonmouth.

She didn’t wait for an answer, just stepped up into the trailer to trip the latch on the stall divider and release the second horse, a sorrel who eyed her doubtfully, then began feeling his way backward. At the edge, he extended one foot and waved it around, searching for solid ground. When he found it, he eased on down.

“Here.” She tossed that halter rope to the skinny guy.

He fumbled to grab it, dropping his pretty orange stick. “Now, wait just a minute—”

“And I asked why.” Shawnee persuaded the gray that the grass wasn’t actually quicksand laced with alligators and dragged him around to tie him next to Roy. “You haven’t given me a reason, other than that rules are rules bullshit.”

Beer Gut puffed up like an angry toad. “We were given our orders by the committee president. We have full authority to tow any vehicle in violation.”

“Is that right?” Shawnee did a quick scan and located the rodeo office, a small white building to the left of the bucking chutes. “Let’s just go have a chat with him, shall we?”

She strode away without looking back, ignoring both the outraged squawking and, “Wait! What am I supposed to do with this horse?”

Cole heard the sound of agitated voices, closing in fast. Katie scrambled to attention as the office door burst open, framing the female version of a Tasmanian devil—glittering eyes, wild hair, and a wide, malicious grin. One of the parking attendants huffed up behind her. Over their shoulders Cole spotted a second, skinnier guy holding a lead rope and standing well back from a sorrel horse that regarded him with equal distrust.

The parking attendant shoved into the office, his face frighteningly flushed, and zeroed in on Cole. “You’re the contractor, right? Jacobs?”

“Well, this one—” The attendant jabbed a thumb at Shawnee, who gave a cheesy finger wave. “She claims she works for you, but she won’t park in your area.”

“I’m happier with the contestants. And shade. But if you insist—” She flashed Cole a smile so loaded with sugar it made his teeth ache. “I noticed there’s an open spot right next to you. I suppose I can move if I have to.”

He’d rather do CPR on the entire parking staff. Cole drew in a deep, supposedly calming breath. “Leave her be.”

Shawnee made a triumphant so there noise.

The parking attendant muttered and growled, but turned on his heel and marched off, leaving his bug-eyed partner to deal with the horse, which Cole assumed must belong to the natural disaster now surveying the office like she couldn’t decide what to destroy next.

Cole heaved a beleaguered sigh and gestured toward the rest of the crew lounging around the office. “Everyone, meet Shawnee Pickett.” And she’s aiming to break them all

Rodeo producer Cole Jacobs has his hands full running Jacobs Livestock. He can’t afford to lose a single cowboy, so when Cousin Violet offers to send along a more-than-capable replacement, he’s got no choice but to accept. He expects a grizzled Texas good ol’ boy.

He gets Shawnee Pickett.

Wild and outspoken, ruthlessly self-reliant, Shawnee’s not looking for anything but a good time. It doesn’t matter how quickly the tall, dark and intense cowboy gets under her skin—Cole deserves something real, and Shawnee can’t promise him forever. Life’s got a way of kicking her in the teeth, and she’s got her bags packed before tragedy can knock her down. Too bad Cole’s not the type to give up when the going gets tough…

KARI LYNN DELL brings a lifetime of personal experience to writing western romance. She is a third-generation rancher and rodeo competitor who works on the family ranch in northern Montana, inside the Blackfeet Nation. She exists in a perpetual state of horse-induced poverty along with her husband, Max and Spike the (female) Cowdogs, a few hundred cows and a son who resides on the same general segment of the autism spectrum as Cole Jacobs and doesn’t believe names should be gender-limited.

One Response to Kari Lynn Dell’s TOUGHER IN TEXAS