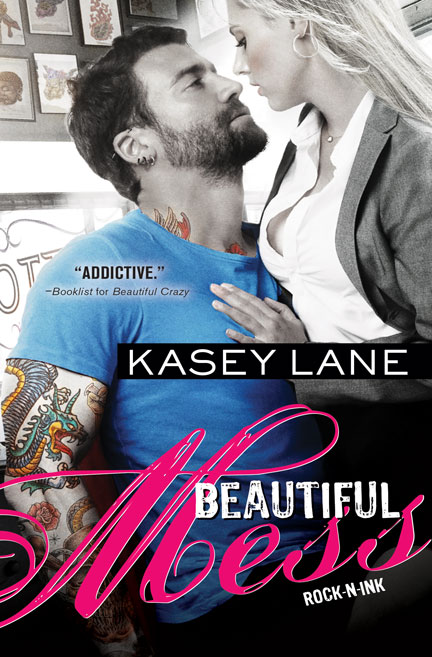 When attorney Jami Dillon strides into the conference room to meet her new client, she’s stopped in her tracks by an all-too familiar figure. Jackson Paige. He’s her tall, tattooed, and sexy as hell hook up from law school—who also broke her heart. When attorney Jami Dillon strides into the conference room to meet her new client, she’s stopped in her tracks by an all-too familiar figure. Jackson Paige. He’s her tall, tattooed, and sexy as hell hook up from law school—who also broke her heart.

Jackson Paige was, in fact, Jax Pain, the drummer of Manix Curse.

That thing in Jami’s chest tightened, making it hard to breathe.

Why did it seem like Jackson was always right? It was starting to get annoying. But she did want to know what had happened to make him run from her five years ago. So long ago she’d buried those feeling of want and abandonment under something she could control. Discipline. Control. And school.

Jami felt completely unnerved under Jackson’s frank gaze. Afraid to know the truth, if he thought it was so bad that she might not ever forgive him. But he stared at her like he knew her, like he could see deep down into her dark places, and he maybe still liked her anyway. The weird, soft, twisty thing she’d felt unfurling before began to unwind more, stretching its warm tendrils.

“You gave me something. A piece of you. I want to give you something back.”

Her throat clogged, like there were jagged pieces of glass she couldn’t swallow down. “I’m afraid,” she managed.

His long thumb, the one with the black heart fashioned at the base of it, gently stroked the top her hand. The motion was both reassuring and unsettling. Every touch, accidental or calculated, sent sharp reminders of her body’s need for Jackson Paige. Was this addiction? Was this why it had hurt so badly and had taken so long to recover from his blow to her heart?

Now here he was playing the part of avenging angel and attentive lover, practically begging for a chance at redemption. What if she didn’t get the closure she’d needed so desperately for so long? What if his answers didn’t quite meet her expectations?

As if he could read her mind, he gave her a lopsided smile. “I’m not looking to make amends, Jami. I’m looking to give you an explanation. One that’s probably pathetic at best.”

Her heart, beating double-time since they’d sat down, suddenly stopped and dropped to her feet. The grim look on his face quickly transformed to horror when he glanced up. “No, no, no. I said that wrong.” He brushed his hand over her hair, tucking in a long tendril. “I meant I didn’t leave because of anything you said or did.”

After taking a sip of water, she found her voice. “Then why? Because everything seemed pretty great.”

He smiled weakly. “Do you remember what we talked about that morning?”

She shook her head. No, not really. They’d made love so sweetly and slowly, chatted in the afterglow about school and art. Then he’d left for class. “We had sex and talked about school.”

“We made love. And it was fucking epic. We talked about art.” He watched her closely, his eyes narrowing, waiting for her memory to come clear. Her cheeks burned like they’d caught fire. Jackson remembered their lovemaking the same as she did.

Yes, his art. And how he’d wanted to balance a law career with being an artist.

“And you wanted to do a showing at the campus gallery.”

Her heart started beating again, hard against her ribs. “I laughed.” Ice flooded her veins. She had laughed, speculating he’d be too busy with his career as an entertainment attorney to be able to pursue his hobby. “But I didn’t laugh at you. I thought you’d be in so much demand as a lawyer. Oh my God, Jackson, I dismissed your passion like it was a silly little whim. I’m so very sorry.” Exactly as her parents had done to her when she’d wanted to go into nonprofit or environmental law.

“I know, sunshine.” He squeezed her hand. “I was going to skip class, went to get us coffee and scones. I was all set to come back and finish the conversation instead of leaving it hanging there.”

“But you didn’t come back.”

“Why?” She hated how shaky her voice sounded, how the short word came out as a whine.