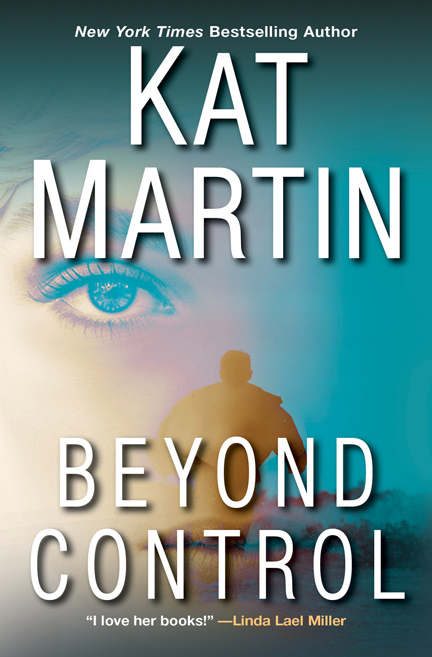 In BEYOND CONTROL by bestselling Kat Martin, Victoria Bradford and her four-year old daughter are on the run from Tory’s abusive ex-fiancé.   Seventy miles north of Dallas, the Iron River Ranch is pretty much nowhere, exactly what Josh Cain wanted when he came back from Afghanistan.  Big skies, quiet nights, no trouble.

When Tory shows up with her adorable little girl, Josh realizes he is in for trouble of the most personal kind. But Josh has seen trouble before, and he doesn’t scare easy. Not when “accidents” start happening around the ranch. Not when Tory’s best friend is abducted.  Not even when he realizes their troubles are only the tip of the iceberg.

Victoria Bradford and her four-year old daughter are on the run from Tory’s abusive ex-fiancé.   Seventy miles north of Dallas, the Iron River Ranch is pretty much nowhere, exactly what Josh Cain wanted when he came back from Afghanistan.  Big skies, quiet nights, no trouble.

When Tory shows up with her adorable little girl, Josh realizes he is in for trouble of the most personal kind. But Josh has seen trouble before, and he doesn’t scare easy. Not when “accidents” start happening around the ranch. Not when Tory’s best friend is abducted.  Not even when he realizes their troubles are only the tip of the iceberg.

Every minute she spent with Josh was turning into an agony of sexual frustration.  She wanted him.  And though she kept trying to convince herself having sex with Joshua Cain would be a stupid thing to do, she couldn’t completely convince herself.

She kept thinking about last night, how she’d wondered where he was, whether he was with another woman.  She knew he was attracted to her.  At least she was fairly certain.  When he looked at her, the hot gleam in those deep blue eyes spoke volumes.

Last night, she’d found herself waiting up, watching for his pickup headlights to come rolling down the dirt road back to the ranch.  She’d felt a ridiculous wave of relief when he’d pulled up in front of his house well before nine P.M.

She didn’t think he had been with a woman last night, but Josh was a virile man and a man like that had needs.    Sooner or later, he would find himself a woman, and the straight truth was, Tory wanted to be that woman.

She glanced up at a knock on Josh’s front door.  She always kept the door lock just in case.  Seeing Josh, she waved good-bye to Mrs. Thompson and Ivy and pulled the door open.

“You ready for your riding lesson?”

Riding lesson.  Dear God in heaven.  Her eyes ran over the hot male in front of her.  Tory swallowed, trying to block the image that rose in her head.

She managed to smile.  “Ready as I’ll ever be.”

In his usual faded jeans and a dark blue T-shirt that hugged his chest and biceps, he pushed up the brim of his beat-up cowboy hat, waited for her to walk past him across the porch, then fell in behind her.

Her heart was racing and it had nothing to do with the sudden realization she was actually going to have to learn to ride a horse.

“You ever been on a horse before?” Josh asked when they reached the cow barn, which he and Cole had reinforced after the horse barn burned down.

It wasn’t much, but at least it provided a shady place out of the weather and a room off to one side for the new saddles, bridles, and other miscellaneous tack Josh had purchased.

“I went on a couple of desert trail rides before I had Ivy.  The horses were pretty old.”

Josh walked over to where a little sorrel with two white stocking feet stood saddled and ready.  “This is Rosebud.  She’s twelve.  Nice and calm, but she’s not like those rental horses.  Rose has plenty of spunk.”  He scratched the mare’s forehead.  “Don’t you girl?”  The horse nickered softly.

Josh ran a hand along the animal’s sleek neck, the confident glide of his fingers making Tory’s skin feel hot.  Rosebud rubbed her head against his shoulder.

Josh had a way with animals.  She had noticed that before.  Except for Star.

“We’ll need to adjust your stirrups.”

“Put you knee here and I’ll give you a boost.”  He clasped his fingers together and bent down.  Tory put her knee in his cupped hands and he boosted her so easily she nearly went over the other side of the saddle.

Josh chuckled.  “Sorry.  I forgot how little you are.”  The minute he said the words, the smile slid off his face.  Why the thought upset him she had no idea.

He was all business again, adjusting the stirrups, showing her the correct position, how to hold the reins, keep them loose and low, with just enough pressure.  The problem was that in order to show her, he had to touch her, and every time he touched her, she wanted to slide off the horse into his arms.

Oh, this was so bad.  How had she ever come up with such a stupid idea?

Josh must have agreed because he got quieter and quieter, as if forcing each word out was a challenge.

“Let’s…umm…go into the arena.”  He led Rosebud into the fenced in ring and directed Tory to ride in a circle, first walking, then trotting.  Josh taught her to post, which kept her from bouncing around like a fool.

She rode for an hour, found herself enjoying the feel of the animal responding to her subtle commands.

“You’re doing great but we’d better stop for the day.  You’ll be sore tomorrow if we don’t.”

A hot mental picture arose.  She’d be pleasure sore if Josh did what she wanted him to do.

As he tied the mare to a ring in the wall, she glanced up at him, into eyes as blue and hot as the tip of a flame.  Josh reached up and wrapped his hands around her waist.  Tory set her palms on those wide shoulders and felt his amazing muscles bunch.  It was too much.  She couldn’t take it any more.

When he swung her to the ground, she didn’t let go, just went up on her tiptoes, slid her arms around his neck, and kissed him for all she was worth.

Josh growled low in his throat…

New York Times bestselling author Kat Martin is a graduate of the University of California at Santa Barbara where she majored in Anthropology and also studied History. Currently residing in Missoula, Montana with her Western-author husband, L. J. Martin, Kat has written sixty-five Historical and Contemporary Romantic Suspense novels. More than sixteen million copies of her books are in print and she has been published in twenty foreign countries. Her last novel, Beyond Danger, hit #4 in Mass Market fiction on the Bookscan National Bestseller list. Kat is currently at work on her next Romantic Suspense.

To CELEBRATE the release of BEYOND CONTROL, enter my new contest for a chance to win a KINDLE FIRE 7″ Display, Wi-Fi, 8 GB and a Kindle copy of AGAINST THE WIND, AGAINST THE FIRE and AGAINST THE LAW. Contest runs from May 1, 2018 through June 30, 2018.