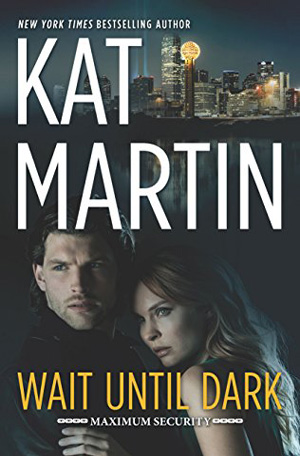 Don’t miss the thrilling prequel to New York Times bestselling author Kat Martin’s brand-new series, Maximum Security! And read on for a message from Kat, as well as an awesome recipe for the holidays!

“Kat Martin is a fast gun when it comes to storytelling, and I love her books.”

Since Thanksgiving is just around the corner, I thought it might be fun to talk about my second favorite holiday (after Christmas, Thanksgiving!

With its glorious red, yellow, and gold colors, Fall is my favorite season of the year.  Then in November, on Thanksgiving day, we have a big family gathering.  We cook a huge turkey stuffed with old-fashioned dressing and serve it with mashed potatoes, giblet gravy, candied yams, fresh vegetables, hot dinner rolls, and pumpkin or pecan pie for dessert (or both!).

We start in the morning and cook all day, then sit down to a table filled to overflowing with the goodies we have been blessed to prepare.  We have kind of an open-door policy for friends and neighbors–anyone who, for whatever reason, hasn’t got a place to go that particular year.  It always adds a fun element to the get-together.

Since I love this holiday, I thought I would share a favorite recipe a dear friend gave me.  It’s been so long ago, making it every year has become a family tradition.  The best part is that every year when I read Sally’s recipe card, see her handwriting in fading blue ink, I think of the friend I haven’t seen in years.  Cooking her dish makes me appreciate her friendship all over again.

In large missing bowl, place both packets of stuffing mix (I usually buy 2 boxes so I can add a little extra to achieve the right consistency)  Pour chicken broth/giblet mixture over stuffing a little at a time, stirring as you go.  Add thyme, sage, salt and pepper to taste.

When you are finished, stuff your turkey (stuff the old boy, my friend’s recipe card says), or grease 9 x 13 inch backing pan, load stuffing into pan, and bake for forty-five minutes at 350 degrees.

When you take it out, you will have a great, old-fashioned raisin-pecan stuffing for your table that I hope will become a family tradition.

And since it’s November, I hope you will watch for my new digital novella, WAIT UNTIL DARK, the prequel to my upcoming Maximum Security series that starts with THE CONSPIRACY, out January 22nd.  Till then, happy Thanksgiving!  Kat. Private investigator Jonah Wolfe knows trouble when he sees it. So when April Vale storms into his office at Maximum Security, all his warning signs flash red. April’s been accused of murder, except she has no memory of how she woke up in her coworker’s bed—drenched in his blood, as he was shot with her gun. As the campaign manager for the mayor, April’s job and life are on the line if she doesn’t figure out who’s trying to frame her. But the clock is ticking, and the pair must find the murderer…before April winds up dead.B

The sound of voices cut through the pounding in her head, dragging her from a dark void into the light of day.  As uniformed policemen streamed into the bedroom, April Vale looked down at her naked body and saw a sea of blood soaking the mattress.  A naked man lay beside her, a bullet hole in the center of his chest.

A scream tore free as she recognized David Dean, Mayor Rydell’s campaign manager.  Then strong arms hauled her upright and a wave of dizziness hit her, making her stomach roll.  One of the officers draped a blanket around her bare shoulders and they hustled her over to a chair by the window.

Fighting a fresh wave of nausea, April gripped the blanket, her body shaking head to foot.  “What…what’s happening?”  She didn’t realize her hands were being cuffed together in front of her until she heard metal clanking and cold bands of steel wrapped around her wrists.

“What’s your name?”  The room swarmed with policemen.  The one in front of her was stocky and balding, in his early forties.  A pair of EMTs rushed into the room and began working over the bloody man on the bed, but his eyes were open and staring at nothing and she knew he was already dead.

April swallowed the bile in her throat and fought to clear her head, but when she tried to remember where she was or how she got there, all she came up with was a blank.

“I don’t understand what’s happening,” she said, trying to keep the blanket around her.

“This will all go smoother if you cooperate,” the stocky policeman said.  “Tell us your name.”

“I’m…I’m April.  April Vale.”  She glanced over at David.  The hole in his chest seemed even bigger and bloodier than before.

“Can you tell us the name of the victim?”

Victim.  A thick lump rose in her throat, threatening to choke her.  “That…that’s David Dean.  We work for Mayor Rydell.”

A young officer with black hair slicked straight back from his forehead walked up.  “Looks like we’ve got the murder weapon, Sarge.  It was right there on the floor next to the lady’s purse.”

April frowned, her mind foggy again.  “Wait…wait a minute.  What’s going on?  I don’t understand.”  Her fingers tightened on the blanket, trying to keep it in place over her naked body.  “I don’t know how I got here.  I don’t remember what happened.”

A gray haired man in a navy blue suit brought the gun over in a plastic bag.  She recognized the little .380 she carried for protection.

I’m Detective Sullivan.  Does this belong to you, Ms. Vale?”

She took a deep breath.  “I think it’s mine.  I have one like that.  I have a legal permit to carry.”

The EMTs began checking her over, her blood pressure, her vision, whether or not she had a concussion.

“We need to get her to the hospital,” one of them said, “have her checked out, get a blood sample.”

“Hospital?  I don’t want to go to the hospital.”

A female police officer walked up just then.  “We’ve cuffed your hands in front of you so you can hold onto the blanket.  If you cooperate, we’ll leave them that way.  If not, we’ll have to cuff them behind your back.”

She closed her eyes.  This couldn’t be happening.  “You think I shot him?  I don’t even know how I got here.”

The woman’s expression never changed.  “You need to go to the hospital.  We need to make sure you’re okay.  If you were drugged, it’ll show up in your tox screen.”

Tox screen.  Drugs.  Her pistol and a dead man.

That’s when it began to sink in how much trouble she was in.  That’s when April’s brain finally started working and she began to figure out what she needed to do–before things got a whole lot worse.

At the sound of the glass front door swinging open, Jonah Wolfe looked up to see a tall, leggy redhead walk into the office.

“I hope she’s looking for me.”  Jason Maddox, one of the country’s top bail enforcement agents and one of Jonah’s best friends, had an eye for beautiful women.  This one definitely met Jase’s exacting standards.

But being a former undercover police officer, Jonah noticed more than her stunning face and figure.  Her hands were shaking as she approached the receptionist desk and her face was pale.  He wondered what kind of trouble the lady was in.

“May I help you?”  The receptionist, Mindy Stewart, shoved up the tortoiseshell glasses perched on the end of her nose.  She was petite and cute, and smart enough not to date any of the confirmed bachelors who worked at Maximum Security.

“My name is April Vale.  I’m looking for Jonah Wolfe.”

When Maddox groaned his disappointment, Jonah’s focus sharpened on the redhead.  He rose from behind his desk and started toward the front of the office.  A waiting area with a dark red tufted leather sofa and matching chairs, oak coffee and end tables, gave the place a western feel that perfectly suited the misfit Texans who worked there.

“I’m Wolfe,” Jonah said when he reached her.  “What can I do for you?”  His gaze ran over her, taking in her spectacular curves.  He couldn’t help hoping she needed him for something a lot more intriguing than his skills as a private detective.

He might have smiled, would have if a TROUBLE sign wasn’t stamped in the middle of the pretty lady’s forehead.

“My name is April Vale.  Thank you for seeing me.

“I’m hoping you will.”  She had the face of an angel and legs that went on forever.  But she was a redhead and all that fiery hair just ramped up the warning signs flashing in her big blue eyes.

“Is there somewhere we can speak in private?” April asked.

“Conference room.  Follow me.”  As he led her down the hall, she caught an appreciative glance from Jax Ryker and Dante Romero, the only other guys currently in the office, but she didn’t seem to notice.

“This way.”  Jonah held open the door to a glass-walled chamber with a long oak table seating twenty.  April walked in and he waited for her to take a seat.

She smoothed the navy blue pencil skirt she was wearing with a pair of sky high heels.  She looked good.  Classy but not completely untouchable.   “As I said, I appreciate your seeing me on such short notice.”

“Not a problem.”  Jonah leaned back in his chair.  “All right, April, why don’t you tell me why you’re here?”

She took a deep breath, drawing his attention to the full breasts he’d been doing his best to ignore.  Since he never mixed business with pleasure, he shoved the buzz of attraction he was feeling to the back of his brain.

“I work for Mayor Rydell,” April said.  “Currently I’m….  I was just released from police custody a short time ago, Mr. Wolfe.  That’s…that’s why I’m here.”

Jonah straightened in his chair.  “You were under arrest?”

“Officially, I haven’t been charged yet.  But the charge could be murder.”

Jesus.  He hadn’t seen that one coming.  Now she really had his attention.  Jonah leaned toward her.  “So who did you kill, Ms. Vale?”

For November, Kat Martin is giving away a copy of AGAINST THE WIND to two winners (winner’s choice of eBook or print format).

New York Times bestselling author Kat Martin is a graduate of the University of California at Santa Barbara where she majored in Anthropology and also studied History. Currently residing in Missoula, Montana with her Western-author husband, L. J. Martin, Kat has written sixty-five Historical and Contemporary Romantic Suspense novels. More than sixteen million copies of her books are in print and she has been published in twenty foreign countries. Her last novel, BEYOND CONTROL, hit both big lists … NEW YORK TIMES BESTSELLER LIST as well as the USA TODAY BEST-SELLING BOOKS LIST. Kat is currently at work on her next Romantic Suspense.