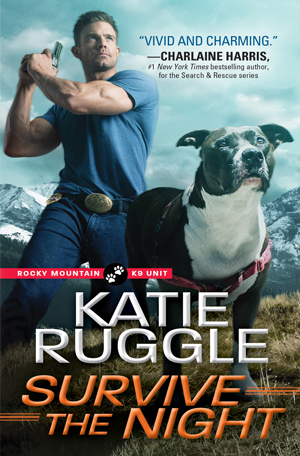 SURVIVE THE NIGHT by Katie Ruggle–romantic suspense at its best!

He’s always been a haven:

For the lost. The sick. The injured.

But when a hunted woman takes shelter in his arms, this gentle giant swears he’ll do more than heal her battered spirit—he’ll defend her with his life. K9 Officer Otto Gunnersen always had a soft spot for anyone in need. As Monroe’s very own Dr. Doolittle, he dedicates himself to rehabilitating the injured souls that cross his path—but for all his big heart, he’s never been in love.

Until he meets Sarah Clifton’s haunted eyes. Until he realizes he’ll do anything to save her.

All Sarah wants is to escape a life caught between ambitious crime families, but there’s no outrunning her past. Her power-mad brother would hunt her to the ends of the earth…but he’d never expect Sarah to fight back. With Otto and the whole of Monroe, Colorado by her side, Sarah’s finally ready to face whatever comes her way.

It’s time to take a stand.

A car turned onto the street, and her heart sank even further when she saw the light bar on top of the vehicle. Logan was a police officer. Had Aaron sent him after her? During that horrible dinner, Judd had mentioned that Logan had contacts. Did they include anyone at the Monroe Police Department?

As her brain raced, she’d frozen for a few seconds, long enough for the squad car to pull up to the curb in front of the carport. It was too late to run and pointless to hide. As close as the squad car was, the cop had to have seen her on the carport. A strong gust of wind pushed her off-balance, and Sarah sat abruptly. There might be no escaping him, but at least she wouldn’t be blown off the roof.

As the police officer swung open the driver’s door and got out, unfolding his large frame, Sarah felt her throat tightening. It was the tall, burly cop she’d met after she’d just arrived, the one who was so terrifyingly handsome that it was a struggle to look at him—like a cross between a Viking and a lumberjack. The one who’d watched her steadily and silently with light-blue eyes until he’d quietly left her room. The way he’d looked at her made her illogically worried that he could read all of her secrets and was just waiting for her to confess.

Once Grace had introduced him as a cop, Sarah had sealed her lips together, afraid that something incriminating would tumble out of her mouth. It didn’t matter that she’d done nothing wrong, that she was an adult and legally couldn’t be forced to stay with her brother—much less marry creepy Logan. There was something about him that still made her…not nervous, but jittery. No, she thought, jittery isn’t right, either. He made her feel too aware of him.

He immediately looked up at her, confirming her suspicion that he’d known she was on the roof even before he pulled up. As he walked closer, he held her gaze, silently as he had before. Rather than ordering her off the roof or yelling at her to get down, as she’d expected, he circled around to the side of the carport. Instead of climbing on the car, as she had, he reached up and grasped the edge of the roof and hauled himself up with an ease that Sarah envied. Once he was up, he sat a few feet away from her.

She eyed his profile as he looked out over the street. What was he doing? If he was going to arrest her, to take her into custody and hand her over to Logan, she wished he’d just get it over with. Sitting next to him, waiting for him to do something, was making her muscles painfully tight.

When he hadn’t said anything for several minutes, Sarah knew she had to break the silence. If one of them didn’t talk, her head was going to pop like an overinflated tire.

“Sorry.” The word came out too softly, and it squeaked in the middle. “There were elk.”

He turned his head to look at her.

“They were fighting?” Clearing her throat, she tried to make her words sound more definite. It was hard, though. His continued silence was freaking her out. “I was afraid of getting caught in the middle, so I climbed up here. Did someone call you?”

His chin dipped down in a nod. Even though he hadn’t actually said anything out loud, the gesture was a huge relief.

“I was going to get down, but I was worried they’d come back. Then I heard your car engine, and…well, you arrived.”

It was a weak finish, she knew, but there was no way to explain her terror at hearing a car, not without telling him too much about her former life. After all, she still didn’t know if he was one of Logan’s contacts. Even if he wasn’t, if a fellow cop arrived and said something awful—like that she wasn’t mentally sound or that she’d committed a crime—Otto would believe the police officer over some woman he’d just met. Sarah had been sheltered, but she’d read books and watched TV. She knew that cops were loyal to each other.

“Is it strange?” Now that she’d started talking, she didn’t want to return to that unnerving silence, the one that made her think he was reading her thoughts with some magical, gorgeous-cop superpower. He cocked his head slightly, as if in question. “Strange that the elk are in town, fighting in the middle of the street? I’m new to the mountains, but it seems weird to me. I mean, squirrels can hang out in town, or rabbits, but elk right here next to all these houses? That seems wrong.”

His lips twitched in something that might have been a start of a smile. There was another pause, long enough for Sarah to think he wasn’t going to answer. Was this some strange interrogation technique? He refused to talk until she spilled all of her secrets? If so, it was surprisingly effective. His silence made her want to open her mouth and let everything inside her head spill out. Quickly, she sealed her lips together. Sharing her thoughts with this cop would be dangerous—very, very dangerous.

He cleared his throat and she jumped. “It’s not strange. Not here, at least.” His voice was a bass rumble, not loud but big and full. It fit him.

“Oh.” Relief flowed through her when he finally spoke. For some reason, hearing his voice made her warm and brought that same not-quite-jittery feeling she’d experienced before. Not able to hold his gaze, she glanced down at his car. “I probably should’ve just stayed where I was, then. If it’s normal and all. Those antlers crashing together was just very…loud.”

There was another pause, although it wasn’t quite so long this time. “You were smart to move out of the way.”

“Good. I mean, thank you.” Silence settled over them again. “Why are you here, then?”

“We got a call that you were up here.” He met her gaze, and she couldn’t manage to look away. “I, ah, wanted to make sure you were okay.”

His eyes snapped back to hers. “Good.” There was a short silence. “Do you need help down?”

“Yes, please.” She glanced at the ground below. Now that the scare was over, she wouldn’t feel right climbing onto the car, and it was a long drop for her five-foot-nothing self. “Just a hand down, though. Don’t call the fire department or anything. That could be embarrassing.”

His mouth quirked again. “I won’t.”

Moving over to the edge of the roof, he swung his legs off the side and lowered himself down. Once again, he made it look so effortless that Sarah felt a little silly for asking for help. She followed, turning onto her belly and letting her legs slide over the edge. His hands steadied her, sliding from her calves to her thighs and then gripping her waist. It was a strange sensation, his firm grip both comforting and slightly dizzying, and it made her pause.

“I’ve got you,” he said in his low, steady way, his fingers wrapped almost all the way around her middle.

It was crazy to trust this stranger—this cop—but Sarah couldn’t help herself. Just from their short conversation, her gut told her that he was nothing like Aaron or Logan or any of the petty, vicious people who had populated her previous life. Maybe he was conning her, but Sarah suspected he was honestly good.

Closing her eyes, she let go of the roof. Just as he’d promised, Otto carefully lowered her down. Even after her feet were securely on the ground and he’d released her, Sarah could still feel the warm impression of his hands pressing into her skin.

“Would you like a ride home?” he asked, and she realized that she’d been staring at him.

Ripping her gaze from his face, she glanced around. “I think I’ll finish my walk. It looks like the road is elk-free. They probably went to the diner for breakfast.”

That almost-smile came and went quickly, but it still gave Sarah a charge that she’d caused it. As she started to walk back toward Jules’s driveway, she expected to hear the squad car engine roar to life, but the morning stayed quiet. The wind had dropped to a gentle breeze, and the rising sun warmed her. When she reached the turnoff for her driveway, she couldn’t resist—she glanced behind her.

Otto was still parked by the carport. She wondered if he was watching to make sure that she made it home safely. The thought gave her a warm thrill, but she quickly quashed it. Monroe was just a temporary stop on her road to freedom. She needed to focus on building her new life, not on a Viking-lumberjack cop with steady blue eyes and huge, warm hands.

At the memory of his firm grip, another frisson of excitement whirled through her. This time, she let it stay. She’d enjoy it for a few moments, she promised herself, but then she would do her best to avoid Officer Otto Gunnersen. With a final glance at the surprisingly intriguing man behind her, she strode up the rutted dirt driveway, smiling.