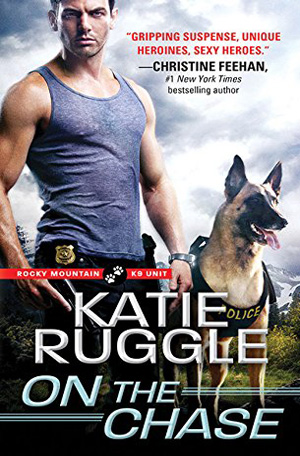 ON THE CHASE by Katie Ruggle

Injured in the line of duty, his orders are simple:

But when a frightened woman bursts into his life, Hugh and his K9 companion have no choice but to risk everything to keep her safe. Injured in the line of duty,

His orders are simple:

But when a frightened woman bursts into his life, Hugh and his K9 companion have no choice but to risk everything to keep her safe.

The sole witness to a horrific crime, Kaylee Ramay flees to the Colorado Rockies to start a new life. There she becomes Grace, a dog kennel employee desperately trying to avoid attention—especially from dangerously attractive K9 Officer Hugh Murdoch.

Because Hugh is tall, dark…and nothing but trouble.

Hugh is anxious to get back in the field after an act of heroism left him warming the bench. Until then, he and his K9 partner Lexi spend their hours teasing the town’s mysterious newcomer. But when their simmering attraction is nearly cut short by a sniper’s bullet, Hugh’s mystery woman must come clean about the secrets she keeps…

Or both of them will pay the price.

His smile dimmed just slightly before returning to full wattage. “Still where it’s supposed to be. I might have lost a few brain cells, but there were plenty to spare.”

Grace rolled her eyes. Of course he would joke about almost dying. Forget that she hadn’t been able to sleep or think about anything else for the past five days since Jules told her about the explosion. She didn’t know why she cared, why she worried about him, why the idea of him almost dying made her heart hurt. It wasn’t like they were friends. Every time they saw each other, they argued. Even now, seeing Hugh all happy and smirky and healthy-looking, she felt her worry turn to annoyance. “Have you found out who planted the bomb yet?”

“Can’t talk about an ongoing investigation,” he said lightly. “You know what we can talk about, though?”

“What?” she asked warily. He was just a few steps away, and she realized that she’d been moving closer without even realizing it. Stupid feet. Don’t they know he’s an ass?

Hugh gestured at her soaked coveralls. “This incredibly fashion-forward look you have going here.”

Her finger hovered close to the trigger. So maybe he’d lose a little skin if she gave him a quick spray. Really, it was what he deserved. With a great effort of will, she kept the washer down at her side.

“You like it?” Posing with her free hand on her hip, she gave him her best sultry-model face. If she had to be stuck wearing wet coveralls and too-large rubber boots, then she was going to own the look.

He chuckled, although his gaze heated as he took her in. “Oh yeah. It’s kennel chic.”

“Right.” Dropping the pose, she frowned at him, trying to figure out why he was looking at her like he wanted to eat her. There was nothing appealing about her at the moment. She’d known this even before she glanced down again, confirming the horrid state of her appearance. “I miss wearing pretty things.”

Immediately, his gaze sharpened. “Pretty things? Like what you used to wear to work? What did you do before in…Bangor?”

That slight pause reminded her that he was a cop—a cop who thought she was a liar. Tipping her head, she gave him a flirty look. “You want to know something?”

“Yeah. What?” He moved a half step closer, his inquisitive expression shifting to something a little…hungrier.

She smiled and leaned toward him. His gaze dropped to her lips. “I’m beginning to understand why someone would want to blow you up.”

To her surprise, he laughed. It made him even more stupidly attractive than usual, and Grace found herself unable to look away. “I’m told that a lot.”

Thrown off guard, she scrambled for a witty retort. “Maybe you should, you know, work on that.”

“Work on fixing my personality?” He leaned against the wall, and Grace gave a silent sigh. It looked as if he was settling in for a chat. As much as she welcomed an interruption from kennel cleaning, Hugh wasn’t her first pick. Whenever he was around, she felt strange, unsettled, almost jittery. He’d pop into her head at odd times, and just the thought of him sent a rush of adrenaline through her veins. It was…uncomfortable.

She realized that he was watching her with a tiny, knowing smile, and she tried to remember what they’d been talking about. “Whatever.” Grace figured that would cover most potential topics. “Why are you here?”

“Otto’s working with his latest project.”

“That explains why he’s here. Why are you here?”

He smirked. The man was impossible to offend. “I was bored, so I tagged along. It’s a good thing, too. We haven’t talked much lately. I was going to stop by to watch Tattered Hearts with you again, but Theo gave me a little lecture about the importance of keeping my lockpicks in my pants.”

“What a shame,” she said flatly, proud of herself for not giving in and smiling. It was hard to resist Hugh’s easy charm. “Well, this was a nice chat. We’ll have to do it again sometime…or not.”

His grin grew, and it became harder to keep her deadpan expression in place. “Oh, our visit isn’t over. Otto won’t be done for a while yet. So tell me, Not-Grace, how long did you live in Bangor?”

“Do you ever tell the truth?”

He smiled at her—a long, slow, easy, predatory baring of his teeth. “I can tell when someone’s lying. It’s my superpower.”

Grace shivered and immediately hoped he hadn’t noticed. By his expression, however, he’d seen it. He looked like a smug housecat, ready to pounce on a trapped mouse. “It’s none of your business. So I’ve moved around a lot. That’s not a crime. I haven’t done anything wrong.”

“Then why are you lying?”

“I told you.” To her annoyance, she couldn’t hold his gaze. Turning her head, she stared at one of the kennels. “I’m not lying. Go away. I have to get back to work.”

She started spraying down the kennels again. The entire time, she felt his gaze on the back of her neck, as hot as sunburn on her skin. It made her crazy that he could bring out such a reaction in her, when she was just a suspect to him. Every time Hugh was nearby, her skin buzzed and her blood flowed faster, and when he left, she felt let down and lonely. He was a cop, and an annoying one at that. Why did she allow him to affect her like this? When she reached the end of the row, she couldn’t take it anymore. Turning, she huffed, “Would you please just…”

She glanced around, but she was alone. Moving over to the door, she looked out and saw Hugh limping slightly as he made his way to the squad car.

It was her turn to watch him. Crazily enough, she felt slightly deflated now that he’d left. Shaking off her idiotic thoughts, she firmed her jaw and turned back to the kennels. Forget Hugh, she told herself firmly. There’s poo to clean.

Even so, she couldn’t resist a final glance out the open door.

When she’s not writing, KATIE RUGGLE rides horses, shoots guns, and trains her three dogs. A police academy graduate, Katie readily admits she’s a forensics nerd. While she still misses her off-grid home in the Rocky Mountains, she now lives in a 150-year-old Minnesota farmhouse near her family.