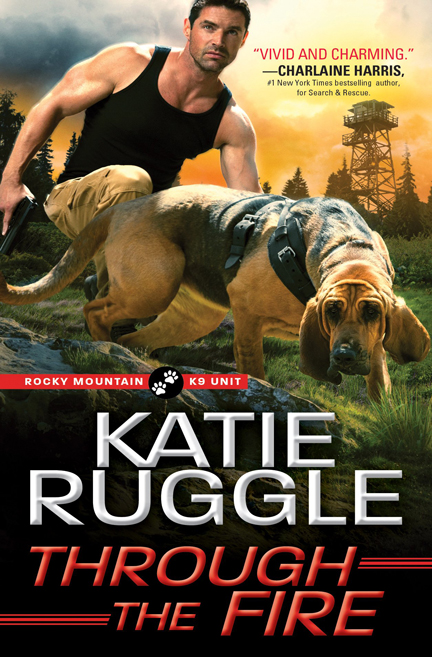 THROUGH THE FIRE by Katie Ruggle gets a 4.5 Heart review from SJ! Check out the excerpt below and enter to win a Katie Ruggle prize pack!

Ruggle once again builds an unforgettable story with quirky, strong, likable characters. Kit’s a formidable heroine, vulnerable yet confident in many ways. Wes really steals the show though, a hero who’s so smart while uncomfortable and awkward in social situations. The pair are an unbeatable duo. The action proceeds at the perfect pace, the tension crisp, the romance heartwarming.

Romantic suspense at it’s best, and it just keeps getting better! And he may be her only hope.

Kit Jernigan despairs of ever fitting in with her new tight-knit K9 unit—they’ve been through too much to welcome a stranger. So when a killer strikes, it’s a fight to convince her fellow officers to trust her long enough to catch the woman she knows is responsible.

She can’t do it on her own. What she needs most is a partner: local fire spotter Wesley March.

Wes knows in his heart that Kit is right, and he’s willing to leave his lonely tower to help her prove it. But the more time they spend together, the hotter the fire smolders…and the more danger they’re in. A member of the K9 unit’s inner circle is determined to have her revenge—no matter who gets burned in the process.

The snow crunched under Wes’s boots as he climbed. It was a beautiful day, with the late-afternoon sun shading to orange as it approached the mountain peaks it was about to hide behind, but Wes didn’t pay much attention to the scenery. He was intent on reaching the bat cave.

Despite its name, the bat cave was more of a rock overhang than a cave, but the bat part was true enough—it housed a good-sized colony of silver-haired bats. Researchers and animal-loving hikers frequently visited the location. Although Wes had gotten some striking photos at the bat cave, he hadn’t even brought his camera with him this time. He was more interested in the cell reception.

When the trail evened out, leading to a large, flat rock overhang, he pulled out his cell phone. Sure enough, he had reception. Finding his sister’s name in his short list of contacts, he called her. As he waited for her to answer, pacing back and forth across the granite ledge, he made a mental note to set up a cell-signal booster at the tower. He should’ve done it before, but he hadn’t missed phone service. Having to mindfully go somewhere with cell reception allowed him to control when and whom he called. It wasn’t enough now, though, not when there was someone he was hoping to call—as soon as he got her number.

“Nothing’s wrong.” Well, nothing except his social skills when women—not including his sister—were around.

“Oh.” There was a pause. “I thought there was an emergency. You never call except for every other Sunday afternoon.”

“No emergency.” He tried to mentally plan out his question. “I need some advice.”

“Advice?” Another silence fell, and Wes could almost hear the gears in her brain turning. He smiled. Leila was even smarter than he was, and she was a whole lot more intuitive and perceptive. That’s why he was calling her. “Does this have something to do with a woman?”

She squealed, the sound so excited that he smiled wider even as he winced and pulled the phone slightly away from his ear. “Are you dating someone? What’s her name? When do I get to meet her? What does she do? Is she funny? Pretty? Smart? A badass? Tell me details, Wes!”

“Answering most of your questions might be premature.” As much as he wanted to talk about Kit, Wes knew it could be dangerous. The more he said, the more real the possibility of something happening with her felt, and he didn’t want to build up hopes too high. After all, the more excited he got, the harder the disappointment would hit if she never wanted to talk to him again.

“Fine.” Although Leila was obviously trying to sound calm, Wes could tell that she was thrilled, and it made him wonder if he’d done the right thing by calling his sister. Now there might be two extremely disappointed people if nothing happened between him and Kit. “Just answer the basic ones, then. Are you dating?”

“No. We’ve only met three times.” He didn’t think their radio conversation counted.

“Yes. I like her.” It seemed like a barely adequate phrase to encompass the fizzing excitement he’d felt around her—and even later, when he was alone and thinking about her. “I’m…interested in her.” That didn’t seem much more accurate.

Leila let out another small squeal, and Wes looked up at the sky, even as he felt his face heat. “Sorry,” she said as if she could see his long-suffering expression. “That’s out of my system now. Back to basic questions. Is she interested in you?”

“I don’t know.” Crouching down, he absently picked up a few small pebbles, his brain fully occupied with the mystery that was K9 Officer Kit Jernigan. “That’s what I wanted to discuss with you.”

“Hang on. I think I need to get comfortable for this conversation.” There were a few rustling noises, and then Leila spoke again. “Okay. I’m ready. Let’s start with the first time you met. Tell me what happened.”

“I needed propane, so I refilled my tank at the station on the southeast side of town. I wanted to be back home before things got busy—”

“Wesley,” she interrupted. “I’ve been to your Podunk town, remember? It never gets busy. There are, like, ten buildings and eight people total.”

“The population of Monroe—”

It never hurt his feelings when Leila cut him off like that. In fact, he appreciated her directness. It was easier than trying to guess what a person was thinking by their body language or tactful words. “Four days ago, I was driving west on Mule Drive at six fifty-four, but I was forced to stop due to an SUV backing a small utility trailer into a driveway.” He frowned at the memory. “Attempting to back a small utility trailer into a driveway.”

“Go on. No, wait! Let me guess. Did you save this woman from getting run over?”

“Oh.” She sounded disappointed. “Go on, then. What did happen?”

Wes smiled slightly. His sister was terrible at listening to stories. She didn’t have any patience, wanting to rush right to the conclusion instead. “After talking with the driver, I didn’t think she’d move the trailer into the driveway efficiently—which meant I’d be late—so I got out of my truck in order to help.”

“She was the driver?” Her voice was hushed, amusing Wes.

His eyebrows scrunched together. “It is?”

“Well, not really, I guess. I think I’m just anticipating that it’s going to be romantic soon. Go on… Get to the good part!”

He hesitated. “I’m not sure what you’d consider the good part.”

Her gusty sigh was audible. “Just tell me the rest. I’m dying of curiosity here!”

“I helped her get the trailer into her driveway and unhitched it.”

There was a long beat of silence. “That’s disappointing.”

“Did she tell you her name, at least?”