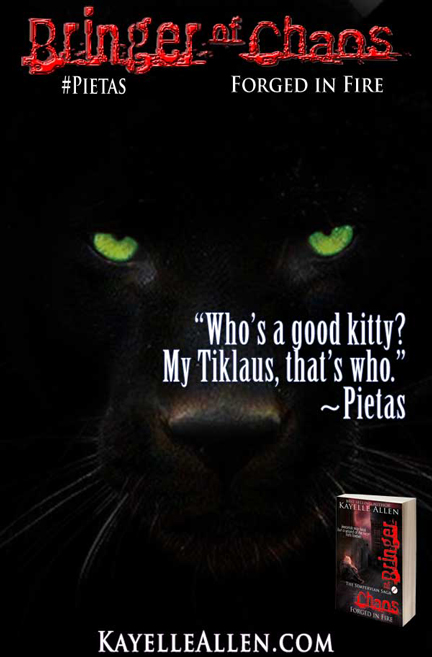 The immortal Pietas was a soldier from the time he could walk. He and his twin sister were never allowed to be children. His father demanded perfection. They were “on duty” 24/7 and spent every waking hour studying, training to fight, learning how to hate the enemy. Who was the enemy? Humans.

Bringer of Chaos: Forged in Fire

The immortal Pietas was a soldier from the time he could walk. He and his twin sister were never allowed to be children. His father demanded perfection. They were “on duty” 24/7 and spent every waking hour studying, training to fight, learning how to hate the enemy. Who was the enemy? Humans.

The Bringer of Chaos series features Pietas, an Ultra. His violent and hate-filled upbringing affected every aspect of his life. He made it his long life’s mission to overthrow human control and dominate them, everywhere in the galaxy.

Six, a human special ops soldier killed in battle, was resurrected using Ultra blood. Now part of Ghost Corps, he’s able to overpower and kill Ultras. Ghosts are detested and feared by immortals. In a turn of events that shocked everyone, Six captures Pietas, but then ends up saving his life.

Pietas is still trying to be Mr. Perfect. Not easy, even for a genius immortal with an eidetic memory. But for one whose best friend is a human who doesn’t take anything seriously? Impossible.

Bringer of Chaos: Forged in Fire has a huge helping of humor, angst, some violence, and a dab of romance with a beautiful telepath from whom Pietas can hide no secrets. And let us not forget, one ginormous sentient panther who follows Pietas everywhere and wants to be his “kitty.”

Here’s a short excerpt to give you a taste of the story. Pietas has been playing with the panther, a huge animal he calls Tiklaus. The name means “Loyal Warrior.”

The panther batted at him, knocked Pietas onto his back and then flipped itself down beside him. Tiklaus wrapped its front legs around his arm and gnawed at it in gentle play while the hind feet kicked him without injury. Claws flashed, but did no harm.

Pietas blew out a breath. Now I know how a chew toy feels.

When the panther draped itself over his chest, Pietas struggled to slide out from under but could not get up. The animal weighed less than he did, but with no visible effort, it kept Pietas from rising.

The panther ignored him.

Pietas tried a signal that worked with sparring partners and asked for release by double-tapping the panther’s side.

The cat stood at once and stepped over him. It shook from nose to tail, then sat and groomed itself.

Pietas stood and brushed himself off. Standing beside Tiklaus, who reached him mid-thigh, he took pride in knowing this sweet, playful cat was also the snarling ball of animal rage that had nailed his father to the ground.

Pietas ensured no one was on the path in either direction before he knelt and scratched the cat’s ears. “Who’s a good kitty?”

The animal sneaked in a lick of his hand and face and flopped down on its back.

“My Tiklaus, that’s who. Tiklaus is a good kitty.” He rubbed the smooth belly. “Yes, you are! Such a good, big kitty. You’re my kitty, aren’t you? Good, good kitty.”

The panther accepted the attention, one paw twitching. After a moment, it stood and shook itself. A purring sound rumbled from its chest. It sat, licked one paw and added a lick of Pietas’s face as well.

He chuckled. “Thank you for the bath.” He hugged the panther’s neck. “You have as soft a heart as I do but you don’t show it either. Pact, my friend. I won’t tell if you won’t.” He kissed Tiklaus on the nose.

The panther bumped its head against Pietas, then bounded to a tree and up it. Bringer of Chaos: Forged in Fire
Marooned on a barren world with no food and few survival tools, Pietas knows it could be worse. He could be alone. But that’s the problem. He’s not.

Half a million of his people sleep in cryostasis, trapped in their pods and it’s up to Pietas to save them. But before he can, he must take back command from a ruthless enemy he’s fought for centuries. His brutal, merciless father.

Immortals may heal, but a wound of the heart lasts forever…

Here is a free adult coloring book to download and print, based on Pietas. Like dragons? You’ll enjoy this! http://bit.ly/color-pietas

Join the Romance Lives Forever Reader Group Download four free books and get news about books coming soon. You can unsubscribe at any time.