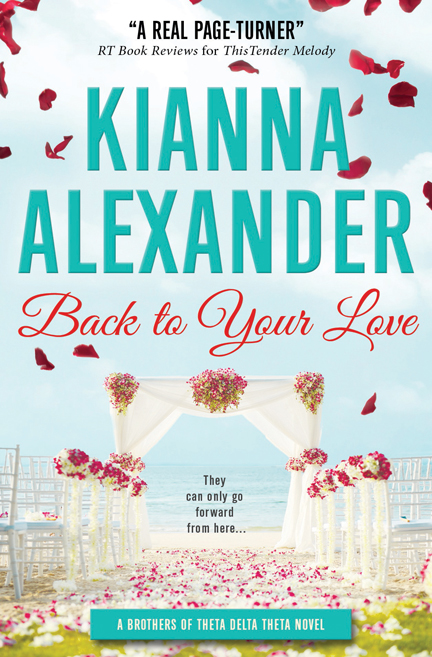 In Kianna Alexander’s BACK TO YOUR LOVE, Xavier Whitted, CPA and city council candidate is excited to get away to the Crystal Coast for his best friend’s wedding. He is shocked when he runs into his high school sweetheart there, the only woman he ever truly loved. Title: Back to Your Love

Xavier Whitted, CPA and city council candidate is excited to get away to the Crystal Coast for his best friend’s wedding. He is shocked when he runs into his high school sweetheart there, the only woman he ever truly loved.

Dr. Imani Grant is just about ready to open her own dermatology practice when a serious wrench is put in her plans—in the form of Xavier Whitted. Old feelings resurface along with old secrets from the past. Imani isn’t willing to go there, until Xavier starts a new campaign: win Imani back—no matter what it takes.

Enter to win your own copy of Back To Your Love!

There are lots of ways to say “I love you,” but which actions are part of Imani and Xavier’s love language?

Imani has set a leather valet by the front door, so Xavier can easily locate his keys, wallet and other essentials.

Xavier stepped to the glass door and swung it open. “After you, Imani.”

She stepped outside, and immediately lamented the loss of air conditioning. The air was thick with the heat and humidity customary for early summer in North Carolina. The tart aroma of the salty waters lying just beyond the hotel property permeated the air. Lush tropical plants filled the small courtyard, some blooming with bright-colored flowers. In the center of it all, three stepping stones led to a wrought iron bench positioned among the leaves and vines.

He sat, patted the empty space next to him. “Come sit with me. I won’t bite unless you ask me to.”

The sexy wink he threw her made her traitorous nipples pebble again beneath her dress. Ignoring her body’s reaction as best she could, she eased into the spot.

Gently, he draped his arm around her bare shoulders.

The feel of his touch radiated through her, the growing warmth inside her far exceeding the temperature of the sultry June night. Being in his arms again didn’t feel foreign, the way it should have after so many years. His touch felt as natural and familiar as her own heartbeat. She noticed the rapid pace of her breathing, and wondered if he noticed it as well.

The low timbre of his voice broke the silence. “If I’m making you uncomfortable, just say so. That’s the last thing I want to do, baby.”

So he had picked up on her nervousness. She shook her head. While her mind told her not to let him get behind her defenses, her heart didn’t want him to withdraw his touch. Instead, she answered him, but kept her eyes directed at her lap. “No. It’s all right.”

“If you say so. I brought you out here to talk, so let’s talk. What have you been up to these last ten years, other than growing more beautiful?”

She felt the smile creep over her face at the smoothly-delivered compliment. “Let’s see. I did undergrad in biology at Spelman, then med school at Meharry, then my dermatology certification—”

“Whoa. Are you telling me all you’ve been doing for the last decade is being a student?”

She shrugged. “I guess so. But I had a goal in mind, and hard work and lots of school were the only ways to reach it.”

That drew a low, rumbling chuckle from him. “I can’t say I’m surprised, you always were intelligent and determined. I’m glad to see you’re accomplishing your goals.”

She took a chance and raised her gaze to his. His rich, dark eyes held the same sincerity she’d detected in his words. “Thank you, Xavier. I appreciate that.”

A silent moment passed between them, their gazes connecting.

When his scrutiny became too intense, she broke the silence. “So, uh, what have you been up to? I heard from Mama that you’re doing a lot of good work in the community.”

A broad smile spread across his face. “I’m glad to know Ma Alma speaks of me so highly. When I’m not in the office handling the books for my clients, I volunteer at a youth center in the old neighborhood, and I do a little work at Second Harvest Food Bank from time to time. I’m no saint, but I do what I can for the community.”

Listening to him talk about his good works in such a modest way, she realized he still had a wonderful heart. In the few weeks she’d been home, her mother had gone on and on about Xavier’s activism. As an all-star athlete and scholar in high school, he could have chosen any career path he’d wanted. But instead of taking some high-paying, high-profile position, he’d chosen to make a modest living so that he could give back to the community that had nurtured him as a child. Yes, Xavier Whitted was a rare bird, and if the look in his eyes were any indication, he was ready to build a nest.

There, beneath his searching gaze, she could feel her very soul opening up. Once upon a time, she’d been certain she’d marry this man. Now, she felt like an inexperienced adolescent. No matter how she tried, she couldn’t look away from him.

The heartbreak she’d suffered at Xavier’s hands had colored her perception of men. He’d been her first love, and had shown her a first glimpse of real pain. Maybe she should thank him for that, because it had allowed her to focus on her goals, rather than be consumed by chasing after a suitable mate.

“Imani, I’m going to kiss you. Is that all right?”

She heard his soft words, and even as her brain yelled at her to back away before she lost her heart to him a second time, no words would come. All she could manage was to look into the endless pools of his eyes.

An instant later, his lips touched hers. The sweetness of his kiss and the buttery softness of his lips made her eyes shut. Her body overtook her brain once again, and she pressed herself closer to him. He pulled her close, surrounding her with his strong arms, and she loved it, God help her. The kiss deepened, and as his skilled tongue stroked against the interior of her mouth, she felt her insides melting down into her shoes like hot wax. Link to Spotify Playlist inspired by the book:

Spotify URL: Back to You Love