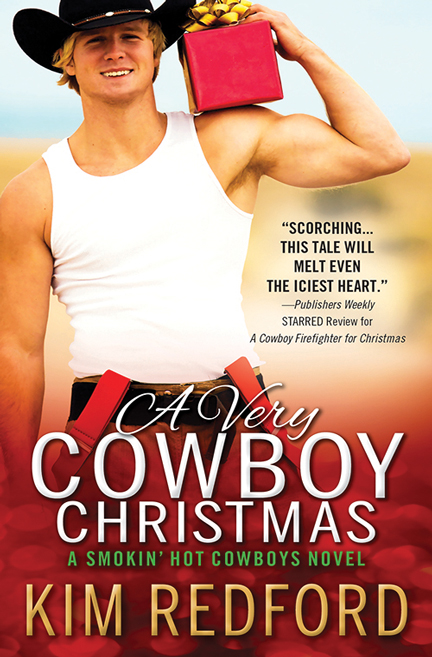 A note from Kim Redford

As a holiday tradition, imagine a big, roaring bonfire with red and orange flames leaping upward along with spirals of pale smoke. I’ll be in my chair beside the fire, along with family and friends, in an open meadow surrounded by the sight and scent of evergreen trees. Bright stars twinkle in the canopy of dark sky above us. Dogs and cats lounge here and there. Guitar and flute and voice serenade us with favorite Christmas carols and old-time country songs that stir fond memories of our close community of loved ones, as well as those who are no longer with us or who are too far away to be there. We drink hot apple cider, roast marshmallows, cook hotdogs, and make s’mores as we sing and visit while making plans for another wonderful year.

And just so you know, there’s always room for one more at our bonfire. An Excerpt from A Very Cowboy Christmas by Kim Redford

Sydney felt the heat of Dune’s gaze and glanced up at him. He’d moved closer. She inched toward Celeste, her 1959 pink Cadillac, but if she backed up any farther, she’d be impaled on the tinsel-wrapped longhorns. Drat that gleam in his blue eyes. He had it whenever he was around her, and it had a tendency to strike sparks in her.

“You want me to look under the hood?” He leaned forward with a little quirk of his sensual lips.

So kissable. She squashed that thought and immediately was swamped with another one that had him looking under her skirt instead of the hood. What was wrong with her? She definitely did not want him looking anywhere but at her convertible. She had to get her mind back on business.

“Yes!” She was in a hurry to get away from him, or she’d be wearing tank tops instead of sweaters this Christmas.

“You want to step away from Celeste?”

How could she when he was right in front of her? If she made a single move, she’d be right up against his body. If she could’ve, she would’ve looked into the distance to try to clear her mind of unacceptable thoughts, but she couldn’t see over his broad shoulders. He totally filled her world with his presence.

“Guess you’ve got a lot on your mind.”

She rolled her eyes. He didn’t know the half of it. She caught her lower lip with her upper teeth in frustration.

He reached out, tugged her lip free with the pad of his thumb, and gently rubbed back and forth as if to soothe a hurt. “No need to worry. I’m here to help you now.”

She felt chills run up her spine at his gentleness and concern. She didn’t mean to do it—and wouldn’t have been so bold if he hadn’t short-circuited her brain—but she flicked the tip of her tongue over the edge of his thumb and tasted the essence of him. All male.

“Now, why’d you go and do something I can’t resist?” He eased his thumb across her lower lip, down her jaw, and captured the back of her neck with his fingers to hold her head in place as he lowered his face toward her.

She knew a kiss was coming—right on the side of Wildcat Road in front of the whole county—and she knew she should say something or do something to stop him, but she wanted his kiss more than anything else she could imagine at that moment. It’d been so long since a man had held her or kissed her that she wasn’t sure she even knew how to respond anymore.

When his lips finally touched hers—just a gentle brush really, as if he was gauging her response—she felt swept up in a blazing wildfire.

And yet she sought to keep her wits about her. She should focus on business, not her own sudden need. She put her hands flat against his broad chest to push him back, but she quickly realized she couldn’t budge him because he was so much bigger and stronger. She felt a little shock. She was five ten—although she’d claimed to be six feet tall since her high school basketball days when height was critical—and sported enough muscle to work a ranch, but he made her feel almost petite.

She intended to push him away—absolutely, no doubt about it. Instead, she found her hands slowly sliding up his chest, making her hyperaware of the soft cotton of his shirt as his muscles hardened under her touch. All her senses came shockingly alive. She heard a mockingbird’s song, caught the tangy scent of cedar trees, and Dune’s taste still lingered on her tongue. He didn’t move a millimeter, as if he’d waited a lifetime for her to touch him.

When she reached his shoulders, he gave her another feather-light kiss that promised more than it gave. Not nearly enough, not now that her mind had given way to her body. She sighed against his soft lips and clasped his shoulders to pull him closer. He groaned—as if the ragged sound was torn from his gut—at her response to him. She returned his kiss, teasing his lips with the tip of her tongue until she tore another groan from him, and he plunged inside while he crushed her against him, holding her head in one hand and her waist in the other as if he’d never let her go.

She moaned as she thrust her fingers into his thick hair, shivering with heat as he plundered her mouth and made her weak in the knees. She quickly realized that she had an answer to her question. No, indeed, she hadn’t forgotten how to give or receive a kiss, particularly one of this magnitude.

Finally, when she was putty in his hands, he raised his head and looked at her with eyes the color of midnight. She simply blinked in response, unable to articulate a single word.

“If you let me into your life—even a little bit—I promise not to disappoint you.” Third in a spicy contemporary cowboy series from acclaimed author Kim Redford. Sydney Steele needs to wrangle cowboy firefighters to model for her charity Christmas calendar, and Dune Barrett—who she has in mind for Mr. December—is just the man for the job.

Christmas is coming up, and single mom Sydney Steele is determined to make this a holiday to remember for Wildcat Bluff County. She still has to get those pesky, reluctant—and deliciously attractive—firefighting cowboys to pose for her charity calendar. They claim they’re too busy pursuing an unknown arsonist to take a break.

Dune Barrett has been flirting with Sydney for months, so he jumps at the chance to give her a hand. And when he agrees to pose as Mr. December, she couldn’t be happier. But to really win her over, Dune will have to convince eleven other guys from his crew to exploit their good looks for charity…a task much easier said than done.

KIM REDFORD is an acclaimed author of Western romance. She grew up in Texas with cowboys, cowgirls, horses, cattle, and rodeos. She divides her time between homes in Texas and Oklahoma, where she’s a rescue cat wrangler and horseback rider—when she takes a break from her keyboard. Visit her at kimredford.com.

Enter to win a copy of A Cowboy Firefighter for Christmas by Kim Redford.