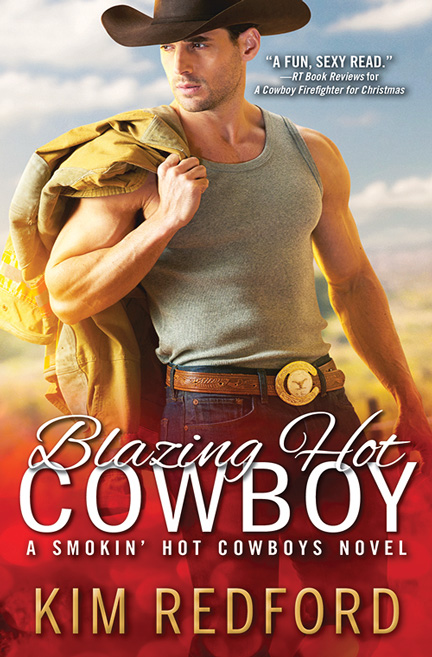 In BLAZING HOT COWBOY by Kim Redford, Kent Duval has it all. A proud rancher and volunteer firefighter in the small town of Wildcat Bluff, he’s missing only one thing from his life: passion. Kent last saw Lauren Sheridan when she was sweet sixteen and they were head-over-heels in love. Now she’s back, spunky daughter in tow, and he no longer knows which way is up. As the heat between them builds, Kent can’t help but wonder if past flames can be rekindled and second chances really do exist. He’s all the heat she’ll ever need.

Lauren Sheridan’s return to Wildcat Bluff after the death of her husband is bittersweet. Thirteen years have passed since she set foot in the place that’s always held her heart…and the sizzling memories of her high school sweetheart.

Kent Duval has it all. A proud rancher and volunteer firefighter in the small town of Wildcat Bluff, he’s missing only one thing from his life: passion. Kent last saw Lauren Sheridan when she was sweet sixteen and they were head-over-heels in love. Now she’s back, spunky daughter in tow, and he no longer knows which way is up. As the heat between them builds, Kent can’t help but wonder if past flames can be rekindled and second chances really do exist.

Kent Duval joined other firefighters in front of a burning barn. He wasn’t wearing much firefighter gear, so he’d pump water and roll hose from the booster while another volunteer used the nozzle to wet a perimeter around the structure.

Streams of water hit the building and steam rose along with smoke as Kent and the other first responders fought to bring the blaze under control. Even so, the fire quickly expanded in size as it ate up oxygen. Soon the wooden barn was fully engaged and pumping smoke. Flames surged higher into the sky. They kept up the water barrage, beating back the blaze despite the orange-and-yellow flames spitting and licking and clawing to take back what was lost. Every fire had its own personality. This one reminded Kent of a dangerous wild bull.

And just when he thought they had the blaze contained, a piece of shake-shingle roof was ripped off by the wind and whipped across firefighter heads to land in the adjacent pasture. Flames immediately set the dry grass ablaze, and a line of fire headed straight for the nearby house at Twin Oaks.

“Watch my pump!” When Kent got a nod of understanding from another firefighter, he took off running, hoping he could stomp out the fire with his cowboy boots before it took hold and swept away from them.

He got ahead of the blaze, but the flames were quickly consuming the grass. He stomped hard, making a little headway, but he quickly realized he wasn’t able to do enough fast enough. And the other firefighters couldn’t leave the barn. He’d have to call for backup, but he feared the engine couldn’t get there in time.

Just as he pulled his cell phone out of his pocket, he heard Lauren calling to him. He glanced up. She’d crossed the road, dragging a heavy fire extinguisher in each hand, up to the barbwire fence. He could’ve cheered because she might just have saved the day.

He pocketed his cell, ran over to her, grabbed the canisters, and set them down on his side of the fence.

“Hold up the barbwire and I’ll crawl under,” she said as she went down on her knees.

“Lauren, I don’t want you in danger.”

“I’m not letting that fire get anywhere near my daughter at Twin Oaks.” She lay down and started to crawl on her stomach under the fence.

He quickly raised the bottom strand of wire so she wouldn’t tear her clothes or scratch her back.

Once she was on the other side, she grabbed a can and dragged it toward the leading edge of the blaze.

He used the black strap to hang the other fire extinguisher over his shoulder and caught up. He tried to take the canister from her, but she gave him a no nonsense look.

“Two of us are faster than one,” she said. “I remember how to use these cans, so let’s get to it.”

He grinned, loving her sassiness even as he wanted to keep her safe. He knew better. This was his Lauren, and she didn’t back down for nothing or nobody. “Let’s do it.”

Together, they got out in front of the fire and started spraying the potent chemical on the blaze, leaving a trail of yellow. They continued to relentlessly douse the flames till nothing was left except charred grass. When their fire extinguishers were empty, they tossed them aside, and then stomped on the crisp grass to make sure there were no hot embers left that might reignite.

Finally, Kent picked up one empty canister and hung it from his shoulder by the strap before he put the other strap over his free shoulder. He couldn’t resist leaning down and giving Lauren a quick kiss.

“Don’t you know I’m too hot to handle?” she teased, chuckling with a sound caught somewhere between delight and relief.

“Guess I’m looking to get burned.”

“I think we’re both a little on the scorched side.” She pointed toward the barn. “But that building took the brunt of it.”

He looked in that direction. He felt a vast sense of comfort when he saw the old barn was nothing more than a pile of black rubble with a red-orange glow of banked embers here and there. He glanced back at the blackened patch of pasture. He’d been cocky tonight—maybe because being with Lauren had made him feel like Superman. He knew better. You could never count on a fire doing what it was supposed to do, and particularly not when it was a raging bull of a blaze.

He clasped Lauren’s hand and threaded their fingers together. “Guess you’re a Wildcat Bluff volunteer firefighter all over again.”

She squeezed his hand. “I feel like I’ve never been gone.”

Kim Redford is an acclaimed author of Western romance novels. She grew up in Texas with cowboys, cowgirls, horses, cattle, and rodeos for inspiration. She divides her time between homes in Texas and Oklahoma, where she’s a rescue cat wrangler and horseback rider—when she takes a break from her keyboard. Visit her at kimredford.com. Enter to win one of ten copies of Blazing Hot Cowboy by Kim Redford.