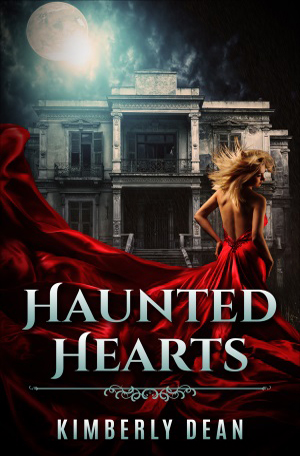 Does a ghost from the past want the man of her future?

Callie is thrilled when she inherits a house in the small town of Shadow Valley. The house is old and creaky, but she’s not afraid of hard work. Unfortunately, no matter how many repairs she makes, the strange noises won’t go away. Cold spots appear. Lights flicker. Footsteps sound down the hallway. Her nerves are soon so frayed that she resorts to calling the one person in town she hasn’t been able to get along with, bullheaded police chief Carter Landry…

Boo! Are You Scared or Did You Laugh?

It’s Halloween time again, and everyone I know is getting excited. It’s the one holiday that’s strictly geared toward having fun. Some people enjoy the costumes, candy, and parties, while others like the thrills. Haunted houses, horror movies, and corn mazes have become increasingly popular. But why do some of us like being scared?

According to Psychology Today, when the fight-or-flight instinct is triggered, we experience an onslaught of adrenaline, endorphins, dopamine, and other chemicals. They’re intense and result in an enhanced, super-aroused state. If we’re in danger, this doesn’t feel good; but if we know we’re in a safe, controlled environment, it can be a rush. This heightened state can make us feel more confident and, if experienced with friends or family, create a bonding experience and lasting memories.

It all depends on brain chemistry and past experiences. Walk a child through a haunted house while they still believe in monsters, and that bad memory will stick. Some people are overly sensitive to the hormones of fear. They can’t apply the mental brakes to take them from screaming to laughing. The experience lasts with them longer and doesn’t have any of the pleasurable after-effects. When it comes to Halloween, these people usually stick to carving pumpkins and eating popcorn balls. And who doesn’t like It’s the Great Pumpkin, Charlie Brown?

For those of you looking for something a little more spine-tingling, I’d like to offer you my new romantic suspense ghost story, Haunted Hearts. It’s spooky, sexy, and suspenseful. It just may cause your heart to race… and make you smile. Does a ghost from the past want the man of her future?

Callie is thrilled when she inherits a house in the small town of Shadow Valley. The house is old and creaky, but she’s not afraid of hard work. Unfortunately, no matter how many repairs she makes, the strange noises won’t go away. Cold spots appear. Lights flicker. Footsteps sound down the hallway. Her nerves are soon so frayed that she resorts to calling the one person in town she hasn’t been able to get along with, bullheaded police chief Carter Landry.

Carter doesn’t have time to investigate things that go bump in the night—although, with Callie, the idea is tempting. He’s busy working with the governor’s task force on a major case and dealing with a rash of petty Halloween crimes. He knows that Callie’s house isn’t haunted… no matter what town legend says.

Still, when her distress call comes in, Carter is quick to respond.  He may not believe in ghosts, but someone is intentionally scaring the sassy blonde. And he doesn’t like it. As he investigates, the friction between the two of them ignites into passion… and the strange occurrences in the house subside. But could Carter’s presence be the reason? Callie fears that her sexy cop may be the one the ghost has wanted all along.

A cold breeze swept over Callie’s skin. “What the—”

Twisting, she looked under the table at the vent. She could feel heat on her ankles, so why did the room suddenly feel like it had gotten twenty degrees colder? The air wasn’t only downright chilly, it seemed heavy. Weighty, somehow.

The hair at the back of her neck rose.

“That’s it.” She scooped up the tray. It was late, and she was overtired. She put the platter back in the refrigerator, but kept the champagne. She scowled at the basement door.

She hadn’t liked it when she’d explored down there earlier today. Hadn’t liked it at all. The big, gaping room was unfinished and dingy. Maybe it was that emptiness that had bothered her. Light hadn’t even wanted to go down there.

She waited for the furnace a moment longer.

Once again, she was greeted with silence.

“Good,” she said. Still, she took another swig of champagne.

She nearly dropped the bottle when a long, drawn-out creak came from overhead. The sound was haunting, coming right down through the outer wall. She lasted only a half-second more before thrusting the champagne into the refrigerator and hurrying out of the room.

It was that annoying shutter, she reminded herself… the one on the second floor.

Not to mention some alcohol that had obviously gone straight to her head.

She found the thermostat in the hallway near her bedroom. The living room seemed warmer, but she could feel that chill seeping out of the kitchen. Almost as if it was pushing her away from it…

A shiver ran through her.

“Darn it.” The furnace needed help. She was going to have to get somebody out here to check on it.

Goosebumps dimpled her bare arms, and darkness pressed on her from all sides. The dim light from the old bulbs in the light fixtures couldn’t hold it back. Quickly, she scampered to her room. For one night, she’d have to survive the old-fashioned way of huddling under the covers. Her teeth were chattering by the time she closed the door behind her.

When she did, the chill disappeared, and she was practically bathed in warmth.

She frowned. Kneeling down, she held her hand out in front of the floor vent in this room. Warm air brushed against her fingertips. She sighed. No doubt about it, the heating system was screwed up. “Ka-ching.”

She was going to have to start writing again soon to earn the money to pay for all these repairs.

She opened a box to search for something to sleep in. The only things she could find, though, were towels and bedsheets. Giving up, she shrugged out of her clothes. She slapped off the overhead light and dove, naked, for the bed. She pulled the covers up to her chin.

Sucking in a deep breath, she tried to relax.

This was going to have to stop. The house was old and needy. It didn’t make any sense why she was letting it get to her. She was used to noise. She’d moved here to get away from the hustle and bustle. On any given night in her old apartment in Boston, she’d had to sleep through music from next door, vacuuming from the obsessive-compulsive upstairs, or fighting from the newlyweds across the hall. A clunky furnace and a creaky shutter should be nothing.

Then again, it could be because she was alone.

The soft sound was impossible to ignore. Callie’s eyes flew open, and she sat straight up in bed. Her heart thudded as she reached over and turned on the bedside lamp. With wide eyes, she looked across the room.

And her heart nearly stopped.

Her bedroom door had just locked itself.

And you can find Kimberly Dean at her website – https://kimberlydean.com