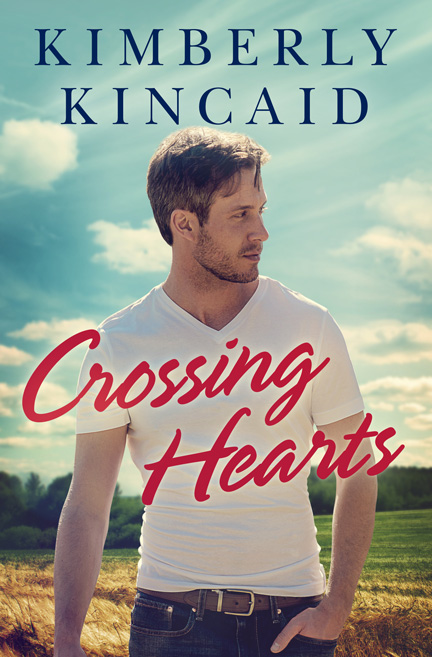 Emerson Montgomery has secrets. Refusing to divulge why she left her job as a hotshot physical therapist for a pro football team, she struggles to readjust to life in the hometown she left behind. The more time she spends with Hunter, the more Emerson finds herself wanting to trust him with the diagnosis of MS that has turned her world upside down.

But revealing secrets comes with a price. Can Hunter and Emerson rekindle their past love? Or will the realities of the present—and the trust that goes with them—burn that bridge for good?

“Leaving Millhaven for good was the only way I would ever escape the pressure of my parents ruling the rest of my life, and going to Swarington was the only chance I’d ever have to get out.”

Emerson’s voice, which had stayed characteristically steady until now, wavered as she added, “And breaking your heart was the only way I could guarantee you’d be happy.”

“I wasn’t happy,” Hunter argued, low and quick. He’d been so miserable and miserable to be around after Emerson had left Millhaven, even his brothers had cut a wide berth around him for weeks. “Jesus, Em. The stress must have been . . . dammit, I wish you’d told me.”

A sudden spurt of anger filled his veins. They’d been in love with each other—he’d freaking proposed. He got that she’d felt insecure in the face of the pressure, and her hesitation to confide in him made sense now that he understood how crushing that pressure had been. But how could she not have trusted him with something so huge? “I could have helped,” he insisted.

Emerson steeled her spine, her shoulder blades hitting the back of the bench with a soft thump. Of course, he should’ve known better than to think she’d let go of her moxie entirely, even in a vulnerable moment. “There is no fixing my parents’ opinion of me, Hunter, especially since I chose physical therapy over med school. You just saw that for yourself. Anyway, what would you have done if you’d known that leaving was my only option?”

“We could’ve figured something out. Hell, Emerson, even if you couldn’t have stayed, I could have . . .”

As if all the dots had connected like stars in a constellation, the fragmented pieces of the past that he’d once thought had nothing to do with each other—hell, with anything—fell into sharp, startling focus.

“You left the way you did so I wouldn’t go with you.”

The barely-there smile ghosting over her mouth answered him before she spoke a word. “You belong here. This town, the farm, your family. I wanted to be with you, Hunter. But I couldn’t stay. I knew that if I told you why, you’d want to come with me. Just like I knew that if you’d left, you’d have been miserable.”

Remorse covered Emerson’s face in a deep flush. “I’m sorry. Hurting you was the hardest thing I’ve ever done. But I knew that eventually, you’d get over the heartbreak of our relationship ending. If you’d lost your livelihood by leaving Cross Creek behind, I didn’t think you’d ever recover, and I just couldn’t do that to you. So that’s why I left.”

He sat for a minute, inhaling deep breaths of slow summer sunshine that felt completely at odds with the emotions pumping through his chest and veins and mind. Everything about his past tilted and tumbled into a new light, and finally, he turned toward Emerson with a nod.

“I suppose that makes sense,” Hunter said, brushing his fingers over her forearm to keep hold of the conversation for a minute longer. “I’m not saying it’s not going to take me awhile to really let the truth sink in, or that I like it. I still wish you’d told me what was going on between you and your parents.”

He paused, unable to really even wrap his head around what her father had said and done. The man was her father, for Chrissake. Her family. “But just because I don’t like what happened doesn’t mean I don’t understand why you left.”

“I never wanted to hurt you,” she whispered. “I didn’t even want to go.”

“I believe you,” he said, because there was no point in denying that her leaving had hurt. But there was also no purpose in dragging out a past that was behind them. “We were eighteen years old. Young and impulsive. I mean, I even proposed. Not that I didn’t mean it, but . . . well, it was twelve years ago, and we can’t change what happened now.”

Emerson nodded tentatively. “That’s true. The only thing we can do now is move forward.”

“Forward sounds good to me.”

Hunter’s heart kicked, each beat thumping against his ears. But they’d lost an awful lot of time to things not said. Bold or not, he’d be damned if he’d hold back now. “Do you remember the other day? When you asked if I’ve ever wondered what if?”

Emerson’s eyes darkened in the muted sunlight, but she didn’t lift her stare from his. “Yes.”

“I might not have ever thought about leaving Millhaven, but I’ve definitely wondered what if. A lot.”

“Mmhmm.” Hunter knew the words were brash, but suddenly, he didn’t care. While his brain might be throwing caution flags up, down, and sideways, the deeper, more primal part of him remembered everything about her—how her chest fit perfectly against his, the way she managed to look so wicked and still so sweet when she came undone—and he added the slightest slow pressure to his grasp on her forearm, stroking her skin with his thumb. “I’m even wondering what if right now. Like what if”—he paused, but just long enough to fully face her on the bench, letting his opposite hand trail up the outside of her arm—“you let me get closer to you.”

She leaned in, her pulse darting under the pad of his thumb. “Like this?” Her denim-covered thigh slid against his as she eliminated even more of the space between their bodies, she was really good at the what if game.

“Yeah. Like that.” Hunter’s fingers traveled higher, leaving the semi-safety of her shoulder for the bare skin where her collarbone met her neck. “So what if I touched you right”—he found the sweet, sensitive spot right below her earlobe that had always made her sigh—“here? Would you like it?”

“Yes.” Emerson’s sigh had grown exponentially sexier over time, and the soft, lusty sound shot straight to his cock, daring him to get even bolder.

“How about”—his forefinger slid over the slope of her cheekbone, desire spiking through his blood when he reached the tiny indent over her top lip and stroked—“here?”

“Hunter,” she whispered, her breath hot on his hand, and just like that, he was done waiting. He’d wanted his mouth on hers for twelve years. He might be light-years away from playing it safe right now, but he didn’t even want to wait another twelve seconds.

He just wanted her.

Closing nearly all the distance between them, Hunter lowered his fingers, replacing them with his lips just a scant inch from hers. “And what if you let me kiss you?”

“That’s not going to happen.”

Fingers of dread laddered up his spine, freezing him to a full stop. “It’s not?” Had he somehow misread her?

But rather than pulling away, Emerson leaned in farther, her mouth curving into a smile that could halt the earth on its axis. “No. Because I’m going to kiss you first.” Kimberly Kincaid writes contemporary romance that splits the difference between sexy and sweet. When she’s not sitting cross-legged in an ancient desk chair that she calls “the Pleather Bomber,” she can be found practicing crazy amounts of yoga, whipping up everything from enchiladas to éclairs in her kitchen, or curled up with her nose in a book. Kimberly is a USA Today bestselling author and a 2016 and 2015 RWA RITA finalist who lives (and writes!) by the mantra “Food is love.” She resides in Virginia with her wildly patient husband and their three daughters. Visit her at www.kimberlykincaid.com or on Facebook, Twitter, Pinterest, and Instagram.