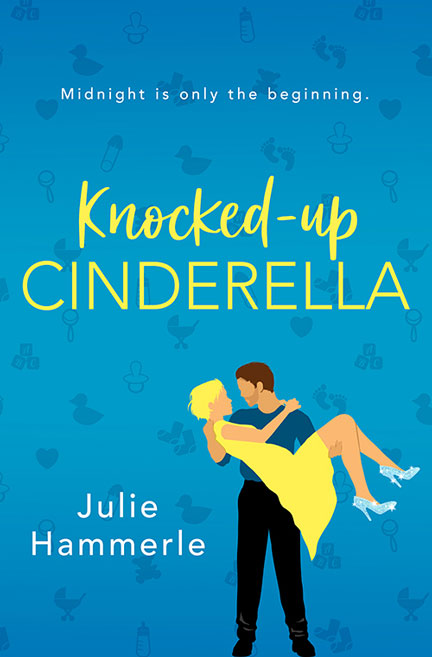 KNOCKED UP CINDERELLA by Julie Hammerle.

I’m a walking contradiction.
School principal who liberally drops the F bomb.
Fiercely independent yet willing to auction myself off for charity.
Serial monogamist who’s down for a no-strings one-night stand.

I’m a walking contradiction.
School principal who liberally drops the F bomb.
Fiercely independent yet willing to auction myself off for charity.
Serial monogamist who’s down for a no-strings one-night stand.

Except now I’ve gone from one-working-ovary to co-parent in the time it took a stick to turn blue.

Ian Donovan may be a richer-than-hell venture capitalist, but he’s no Prince Charming ready to sweep me off my feet. Good thing I don’t need him. I’ve been doing fine on my own for forty years, and I’m not about to start changing that now.

But why is it when you finally swear off men, you meet one who’s too sexy—and determined we can make it work?

Hi, I’m Julie Hammerle. I’ve written four YA books, and my first adult romance is available November 12. KNOCKED-UP CINDERELLA is about a 40-year-old school principal who gets pregnant after a one-night stand with the rich dude who bought a date with her at a charity bachelorette auction. I’m so excited for everyone to meet Erin and Ian! Here’s short excerpt from KNOCKED-UP CINDERELLA, a little bit of the “morning after”:

I flipped over, waking Erin in the process. Her eyes popped open and she bolted upright, pulling the pink sheets to her neck. She looked just as sexy in the morning, with the sunlight glinting off her platinum hair, which stood up at odd angles all over her head. Her eye makeup had smudged under her eyes, giving her a sultry, punk-rock vibe. I was getting hard just looking at her. Author Bio:  Julie Hammerle writes young adult novels that focus on nerds, geeks, and basket cases falling in love. On the YA side, she is the author of The Sound of Us (Entangled TEEN, 2016) and the North Pole romance series (Entangled Crush, 2017). For adult romances, look for Knocked-Up Cinderella in the fall of 2018. A graduate of Butler University with degrees in secondary education and Latin with a minor in music, Julie lives in Chicago with her family and enjoys reading, cooking, and watching all the television.