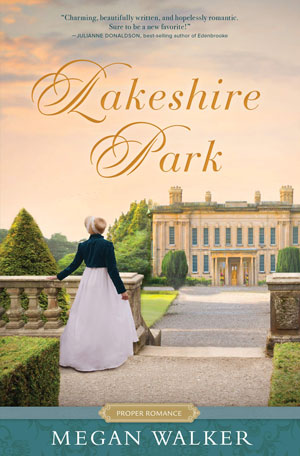 “…readers will find it easy to invest in practical, business-minded Amelia as she learns to follow her heart. This gentle love story is a treat.”—Publisher’s Weekly

“An immersive drama…Walker effortlessly amplifies the decorum of Regency England with chic wit and delightful characters.”—Booklist

“Charming, beautifully written, and hopelessly romantic. Sure to be a new favorite.”—Julianne Donaldson, best-selling author of Edenbrooke

Hello and thank you so much for hosting a blog stop on my blog tour! My name is Megan Walker, and I am the author of Lakeshire Park! This is my debut, and I’m so excited to share Amelia and Peter’s love story with readers. Writing romance is my favorite pastime. The tension and emotion between two people as they get to know each other and fall in love is something I love to watch from the sidelines as a writer, but it is definitely a challenge to create. These feelings and emotions come so uniquely depending on a character’s personality, background and reactions to life in general. So, a major challenge in writing romance, and honestly across genres, is creating living, breathing characters with relatable lives and authentic problems.

Amelia, for example, has become a mother figure to her younger sister after desperate and devastating life events, and that powerful piece of her personality derived from her background drives her to make choices that both pull her closer to Peter, and cause her to push him away.

Peter, on the other hand, has the world at his fingers, knows exactly what he wants, and would do anything to succeed.

Both of these characters have loved and lost in their lives, and so they can relate to each other in an intimate way that ultimately brings them closer together. But their love for their sisters is also what ultimately pulls them apart. Amelia’s sister Clara is the only person she truly loves, and she’d do anything to help her. Peter’s sister Georgiana has been through so much heartache in her life, he too only wishes for her happiness. What a complicated arena for romance!

And the fact that they like looking at each other helps, too.

All of this culminates at the end of the book when two flawed people have fallen in love and you see them hesitate, but, like so many of us, they go for it anyway. And that sweet moment when they do is what makes writing and reading romance so satisfying and worthwhile.

Amelia and Peter definitely have some fun moments at Lakeshire Park where the tension between them is palpable. I hope these moments of tension and heartache are as fun to read as they were to write. And, of course, I hope you love Amelia’s happily ever after! Amelia Moore wants only one thing–to secure the future happiness of her younger sister, Clara. With their stepfather’s looming death, the two sisters will soon be on their own–without family, a home, or a penny to their names. When an invitation arrives to join a house party at Lakeshire Park, Amelia grasps at the chance. If she can encourage a match between Clara and their host, Sir Ronald, then at least her sister will be taken care of.

Little does she know that another guest, the arrogant and overconfident Mr. Peter Wood, is after the same goal for his own sister. Amelia and Peter begin a rivalry that Amelia has no choice but to win. But competing against Peter–and eventually playing by his rules–makes Amelia vulnerable to losing the only thing she has left to claim: her heart. Megan Walker was raised on a berry farm in Poplar Bluff, Missouri, where her imagination took her to times past and worlds away. While earning her degree in Early Childhood Education, she married her one true love and started a family. But her imaginings of Regency England wouldn’t leave her alone, so she picked up a pen and wrote her first novella, A Beautiful Love: A Regency Fairy Tale Retelling which was published in 2019. She lives in St. Louis, Missouri, with her husband and three children. Lakeshire Park is her debut novel.