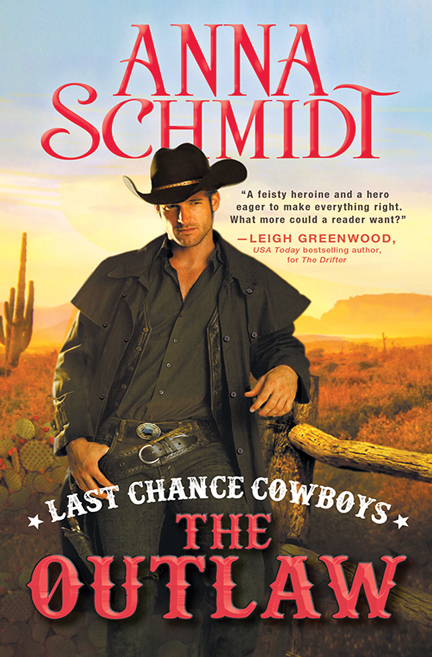 In Anna Schmidt’s Last Chance Cowboys: The Outlaw,  Amanda Porterfield longs to experience real adventure. So when she’s offered a position in bustling Tucson, she leaps at the chance despite unknown dangers—dangers like the mysterious Seth Grover.

As an undercover detective working to stop a gang of outlaws, Seth can’t afford the distractions a woman like Amanda inspires. Yet when the fiercely intelligent beauty is thrust into the middle of a heist gone wrong, Seth will fight for a future that may never be theirs…even if it means risking everything he holds dear. Series: Where the Trail Ends, #3

“‘Someone like me?’ Is that how you see me, Amanda? As someone people should fear?”

“I don’t know what to think,” she said. “One minute you seem so dangerous, and the next you’re sweet and caring and…”

He took a step closer, his eyes sweeping her face. “And which do you want me to be?” His voice was low; it sent shivers down her spine.

“Both,” she whispered, and lifted her face for a kiss.

Amanda Porterfield longs to experience real adventure. So when she’s offered a position in bustling Tucson, she leaps at the chance despite unknown dangers—dangers like the mysterious Seth Grover.

As an undercover detective working to stop a gang of outlaws, Seth can’t afford the distractions a woman like Amanda inspires. Yet when the fiercely intelligent beauty is thrust into the middle of a heist gone wrong, Seth will fight for a future that may never be theirs…even if it means risking everything he holds dear.

Amanda fought her attacker with all her might, ineffectually flailing away at him with both fists. Then, realizing her nails and teeth were better weapons, she raked his neck even as she bit down hard and got a mouth filled with the taste of her attacker’s leather glove for her trouble. She struggled to free herself from his solid, muscular body pinning hers to the ground by straddling her. She went completely still, hoping to surprise him, but he hauled her to her feet, leaving her hat in the dirt and her hair falling free of the pins she’d used to hide it under the crown of the Stetson.

She took some pride in the realization that she’d put up enough of a fight to leave the man breathless. On the other hand, he was practically “Amanda?” Seth Grover was breathing hard and staring down at her, one hand touching her breasts, which were heaving noticeably after the exertion of the fight.

“Explain yourself, Mr. Grover,” she demanded as she planted both hands flat on the solid wall of his chest and shoved him away. He let go, but the sound of fabric ripping told her he’d taken the top couple of buttons of the shirt with him. When she saw his eyes riveted on her exposed skin, she covered herself with crossed hands and felt heat race through her body. “Well?” she hissed, aware that they were standing outside and anyone might pass by or hear them.

“I thought…are you following me, Amanda?”

“Do not flatter yourself, Seth. Miss Jensen might keep tabs on you, but your comings and goings are of no interest to me whatsoever.” She dusted off the seat of her pants, then realized she’d once again exposed herself to him by letting go of her shirt front. “A gentleman would avert his eyes,” she said, “or at the very least offer a lady the cover of his coat.”

He chuckled. “Have to say I’m not much a gentleman, ma’am, but if you’re feeling a chill…” He shrugged out of his coat and draped it over her shoulders, allowing his hands to linger there until she stepped out of reach.

“Thank you.” She bent to retrieve her hat and slapped it against her thigh as she’d seen her father, brothers and the cowboys at the ranch do more times than she could count. The gesture made her feel tougher and taller at the same time. She shook her hair back from her face and planted on the hat, tugging at the brim until the fit was snug. “I’ll leave your coat outside your room. Good evening, Seth.”

“I’ll walk you back.” He fell into step beside her. “Shall we take the street or the alley?”

He was mocking her. She remained silent but picked up the pace.

“Oh, then we’re going to race back?” He matched her step for step, an easy feat given his long legs.

He took hold of her arm, forcing her to stop walking. “I am not leaving you alone, Amanda. You shouldn’t be out at this time of night.” His tone bordered on patronizing. He sounded like her brother Jess, and that irritated her.

“Why do you care?” she snapped and meant it to be a challenge, but found that she really wanted to him to tell her. “You hardly know me.”

He was still holding her upper arm. She could feel the heat of his fingers through the coat and realized that he’d removed the leather gloves. While she processed this thought, he led her to a small lane that passed between the pharmacy and the milliner’s shop. There he took hold of her other arm and pulled her closer.

She was sure he planned to kiss her. She was also sure that she had never wanted anything in her life quite as much as she wanted to find out what kissing Seth Grover might be like. Here at last was the true adventure she’d come to Tucson to find.

“Listen to me, Amanda. You’re looking for trouble, and I won’t always be around to make sure you don’t find it, so fair warning. You need to stop these midnight wanderings. You need to stop getting yourself dressed up to look like a boy. You need to…”

So, kissing her was clearly the last thing on his mind.

She wrenched herself free of his hold. Not that he fought to hold on. “I can take care of myself,” she muttered as she massaged her arms, wanting him to believe he had hurt her when in fact his touch had been firm but gentle.

“Really,” she snapped, and started to walk away.

He caught her hand, and then before she knew what was happening she was pressed up against the side of the building by the length of his body. He had his other hand over her mouth again—this time without his glove. His skin smelled like leather, though. She struggled and he tightened his hold on her. His face was so close she could feel his breath, hot against her cheeks.

“Wake up, Amanda. You are no longer residing on your family’s ranch where no doubt you had others looking out for you. You are alone here in Tucson, and you need to take care.”

Amanda had no idea what came over her. Maybe she just wanted him to stop telling her what she already knew. She cupped his face with her hands and kissed him.

GIVEAWAY! Enter for a chance to win a copy of the previous book in Anna Schmidt’s series, Last Chance Cowboys: The Lawman!

Award-winning author ANNA SCHMIDT delights in creating stories where her characters must wrestle with the challenges of their times. Critics have consistently praised Schmidt for her ability to seamlessly integrate actual events with her fictional characters to produce strong tales of hope and love in the face of seemingly insurmountable obstacles. She resides in Wisconsin.