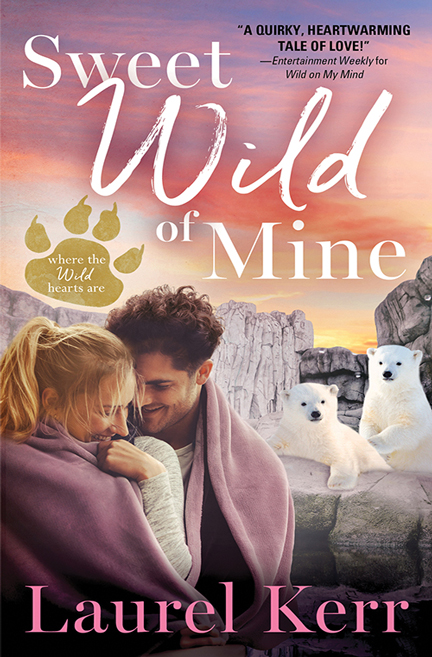 Praise for Wild on My Mind:

In Sweet Wild of Mine by Laurel Kerr, June Winters is a people person and delights in welcoming Magnus to Sagebrush Flats, though it seems unlikely she can get the handsome stranger to crack a smile. Then a mishap with an open gate forces Magnus and June to deal with a stampeding flock of fainting goats, an adorable but clingy polar bear cub, a cranky pregnant camel, and two star-crossed honey badgers. Never mind small town drama—the lively animals may just convince these two that opposites really do attract… Sweet Wild of Mine

In a bid to revitalize his career, bestselling author Magnus Gray has come to Sagebrush Flats to write about the local zoo’s latest rescue—an orphaned baby polar bear. But Magnus dreads the drama of small towns and is bullishly determined to keep to himself.

June Winters is a people person and delights in welcoming Magnus to Sagebrush Flats, though it seems unlikely she can get the handsome stranger to crack a smile. Then a mishap with an open gate forces Magnus and June to deal with a stampeding flock of fainting goats, an adorable but clingy polar bear cub, a cranky pregnant camel, and two star-crossed honey badgers. Never mind small town drama—the lively animals may just convince these two that opposites really do attract…

There was nothing like witnessing new life, Magnus thought as he watched the wee calf make another attempt to stand. Her mother hovered anxiously nearby, using her head to nudge and guide the peedie camel. The bairn managed to get her front legs up, but as soon as she tried to raise her hind ones, her forelegs folded at the knees. Her rear stuck in the air, her hooves splayed out to keep her back half upright.

“I think we should call her Knobby,” Abby proclaimed, her voice bright with the unabashed joy that only a child could display so freely.

Lulubelle chose that moment to snort. Loudly. Abby giggled. “I don’t think Mama likes that one. I guess it isn’t dignified enough. You haven’t named an animal yet, Miss Winters. Would you like to?”

“Do you want a good southern belle name?” June asked.

“Why not?” Bowie said with a shrug. Like Magnus, he’d sneaked off briefly to take a shower, and his wet hair stuck to his head. He must have been just as tired as Magnus, but his face shone with the same energy as his daughter’s. It wasn’t difficult to see the source of the lassie’s love for animals.

“Savannah,” June suggested. No sooner had the word crossed June’s lips than the wee bairn finally stood. She held her position for several seconds before her wobbly legs collapsed. The whole group chuckled softly, not wanting to frighten the calf.

“I think she likes it,” Abby said.

“Savannah it is,” Lou pronounced, and the wee camel struggled to her feet for a second time.

They stood in silence for a little longer before the group started to drift away. Bowie left first to check on Sorcha. Katie then nudged Abby, reminding her that she hadn’t started her homework. Abby made a couple protests, but Katie held firm. The preteen relented and followed her stepmother from the barn. After they left, Lou creakily walked back into the birthing stall. Magnus debated about helping the older man crouch down to check on the camels, but he didn’t want to embarrass him. June made a move to assist, but she must have thought better of it too. Lou managed well enough on his own. When he was satisfied that mother and calf were doing well, he said his goodbyes and headed back to the house.

June lingered, obviously as enthralled with the peedie calf as Magnus. As she stood beside him, he noticed her sway slightly and then yawn. Magnus narrowed his eyes. It was not terribly late in the evening, but the lass must get up early in the morn to start the baking for her café, and she’d been standing on her feet for over two hours watching Savannah’s birth.

“You all right, hen?” Magnus asked.

June nodded as she smothered another yawn. “Four o’clock in the morning is showing on me, that’s all. I’d better go soon and pick up Nan, but I want to stay just five more minutes.”

She looked so tired standing there that Magnus acted without thinking. He stepped next to her and pulled her close, so she could lean her weight against him. She nestled into his body like it was the most natural thing. Pressing the back of her head against his chest, she gazed up at him. “Thanks.”

Her mouth curved into a soft smile tinged with affection. Magnus almost dipped his head and captured her bonny pink lips with his own, but June returned her gaze to the camels. She sighed and wiggled closer. Tenderness whispered through Magnus like gentle snowflakes after a blizzard’s end. He only felt this content when sitting by a fire sipping whiskey and reading a good book. And he’d never experienced peace like this while in the company of another person. It was the kind of quiet that seeped into a man’s soul and slowly washed away the day’s worries.

Neither of them spoke as they watched Lulubelle fuss over her baby. Savannah managed to nurse on unsteady legs. Despite her wobbliness, she greedily drank the colostrum, the nutrient-rich milk that would help ensure her health and survival.

“Aye. A m-m-man can never grow weary of a sight like this.”

“You must have witnessed a lot of births growing up on a farm.”

“Aye, but it never stops being m-miraculous,” Magnus said.

June shifted. Although she still kept her body pressed close to his, she tilted her head to gaze at him. A smile drifted across her lips. Slow. Sweet. Tempting.

A huge sigh from Lulubelle broke the spell the lass was weaving. Magnus turned with June to watch the camel settle down with her calf. Within minutes, the pair drifted off to sleep. June yawned and pushed herself upright. “I’d better head out now. Nan will be wondering where I am. She’s having a good day, but I don’t want her getting scared.”

Magnus followed June with his eyes until she disappeared from sight. Although it wasn’t too baltic tonight, his body instantly missed her warmth. Aw, baws. Truth be told, he craved her presence. And Magnus didn’t like that. He didn’t want to feel this incessant need for another.

And it wasn’t just sexual. It went deeper than that.

He’d lived his whole life independently. He dreaded ending up like his da, a permanently beelin’ arse because a hen left him. But June? June made him want. Made him long. Made him feel things he didn’t wish to.

Magnus knew he should stay away from the lass. But he couldn’t. It wasn’t just that she kept popping up everywhere like a mole in a vegetable patch. He didn’t want to avoid June anymore. Which wasn’t like him. At all.

Excerpted from Sweet Wild of Mine by Laurel Kerr. © 2019 by Erin Laurel O’Brien. Used with permission of the publisher, Sourcebooks Casablanca, an imprint of Sourcebooks, Inc. All rights reserved.

Where the Wild Hearts Are Series:

Sweet Wild of Mine (Book 2)

5 Copies of Wild on My Mind