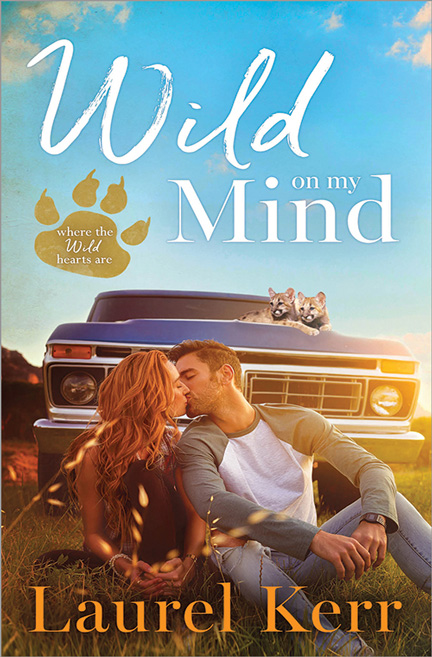 In Laurel Kerr’s WILD ON MY MIND, when Katie Underwood discovers a litter of newborn cougar cubs, the last person she expects to come to the rescue is her former crush—and high school nemesis—Bowie Wilson. The worst part? He doesn’t seem to remember the trouble he caused her.

As a single father and owner of a cash-strapped zoo, Bowie struggles to balance budgets while raising his preteen daughter and a host of rascally animals. He considers himself lucky when Katie agrees to lend her talents to a publicity campaign in support of the zoo’s animal rescue programs—until he learns just what she’s planning… Love runs wild at the Sagebrush Flats Zoo, where a motley crew of big-hearted animals helps the most unlikely couples find love.

When Katie Underwood discovers a litter of newborn cougar cubs, the last person she expects to come to the rescue is her former crush—and high school nemesis—Bowie Wilson. The worst part? He doesn’t seem to remember the trouble he caused her.

As a single father and owner of a cash-strapped zoo, Bowie struggles to balance budgets while raising his preteen daughter and a host of rascally animals. He considers himself lucky when Katie agrees to lend her talents to a publicity campaign in support of the zoo’s animal rescue programs—until he learns just what she’s planning…

This time, Katie is determined to resist Bowie’s charm. But a lovelorn camel, a matchmaking honey badger, and a nursemaid capybara have different plans. Can they and the rest of the zoo’s menagerie help Bowie break through the barriers surrounding Katie’s heart?

She knew one thing for certain, though. After publicly humiliating her and effectively ending any chance of her dating anyone else in high school, Bowie Wilson had simply and utterly forgotten her.

“Uh, ma’am? Where exactly are we headed?”

Ma’am? Really? Although she supposed it was better than Katie Underwear.

“I see that, but where did the mother cougar leave her cubs?” The patience in Bowie’s tone irritated Katie even more. How dare he act like he was the rational one?

She whipped around to glare at him. Even in the harsh light of the LED lantern, Bowie was a handsome man.

Twelve years ago, Bowie could have doubled for a teenage heartthrob with the shock of jet-black hair that had always dangled over his piercing gray eyes. Now, with that hair neatly trimmed and a five-o’clock stubble dusting his jaw, he looked like a model posing for an outdoor magazine. As an immature youth, he’d pos­sessed a bad boy prettiness that appealed to girls—even self-proclaimed geeks like her. The years had toughened his features, hardening his male beauty into something more alluring and dangerous, even to a woman who should have known better.

Much better. Darn the man if he still didn’t have the capacity to make Katie’s hormones dance a happy little jig.

She steamed. If time hadn’t mattered, she might have taken them on a more difficult path. Even then, she doubted that it would have fazed Bowie. Despite never climbing on this particular rock face before, the man moved like a machine. She could just imagine his muscular forearm extending as he reached for the next hold. His bicep would flex as he hoisted his body…

Katie cursed at herself. Sometimes she found her vivid imagination more of a burden than a gift. It had certainly brought her more difficulties than successes.

Thankfully, they quickly arrived at the small cave. Katie started inside, but a warm hand rested on her shoulder. Even through the fabric of her T-shirt, she could feel Bowie’s heat and the strength of his fingers. An unbidden shiver slid through her.

“Let me go first.” Bowie’s breath caressed the sensitive skin on the back of Katie’s neck, and she had to fight to suppress another shudder. “The mother cougar may have returned.”

Bowie dropped to his knees and used the light from his headlamp to scan the cave before crawl­ing inside. With his larger frame, it took him a few seconds to wiggle through the narrow passage. As soon as Bowie moved far enough into the alcove for Katie to enter, she crawled over to the cubs. They moved clumsily about, searching for milk and their mother’s warmth. One yawned. Its tiny whis­kers flexed as it emitted a long squeak. The others followed suit. Katie’s heart squeezed. She resisted the urge to gather the little fluffs against her chest. She still didn’t know the protocol on handling kits this small, and she didn’t want to harm one inadvertently.

“Their eyes aren’t even open yet!” she said.

Bowie nodded. “Nor are their ears at this stage. They must be less than ten days old.” The awe in his voice caused Katie to turn sharply in his direction. He appeared just as infatuated with the cubs as she was. Was this the same man who’d once tied granny pant­ies to the undercarriage of her car along with the sign HONK IF YOU SEE MY UNDERWEAR?

Bowie reached for one of the mewling cubs and cradled it against his muscular chest. The little guy bur­rowed against him, and Katie’s hormones went crazy again. Just when she thought the scene couldn’t get any sweeter, the kit yawned, showing its miniature pink tongue. Then with one more nuzzle against Bowie’s pecs, it heaved a surprisingly large sigh as it fell asleep. Bowie’s handsome features softened into a gentle smile as he stroked the baby cougar’s spotted fur with one callused finger.

If Katie hadn’t suffered years of Bowie’s cruel teasing, she would have found herself halfway in love with him. He’d appeared to be the ideal boyfriend once before, but it had all been a veneer, the perfect trap for a geeky girl with silly dreams of romance. And Katie, the woman, would not fall prey to his outward charms again.

“Can I pick up one of the cougars too?” The cuteness of the cub would serve as a nice distraction from her unwanted feelings.

Bowie nodded. “They’ll need to be hand-reared, so they’re going to end up imprinting on humans anyway. Unfortunately, we won’t be able to rein­troduce them to the wild, but we can save them.”

Katie lifted one of the furry bundles, marveling at the softness of its fur. The little guy emitted a small, contented sound and immediately snuggled against Katie’s warmth. She could feel a cold, teeny nose against her skin as the cub rested its head in the crook of her arm. And right then and there, Katie fell in love. With the tiny kit. Definitely not with the man.

Although she hated putting the baby puma down, she knew the little trio needed more than just a warm cuddle. “Did you bring something to carry the cubs back down the mountain with?”

Bowie grimaced and shook his head. “I didn’t know the climb would be so steep.”

And, Katie realized, she hadn’t given him time to grab something from his truck either. To her sur­prise, Bowie was too polite to point that out.

“Do you want me to run back to the house to get a backpack?” she asked.

Bowie shook his head. “We’ll have to improvise. I’m not sure how long the cubs have been without milk, and we need to get them out of this cave as soon as possible.”

Katie scanned the dirt floor of the alcove and saw nothing—not even a twig. She turned back to ask Bowie what he planned on using and stopped. He was halfway out of his shirt. Normally, Katie wouldn’t blatantly ogle a man, but…those abs. And pecs. His biceps flexed as he ripped his shirt down the middle so it made one thick band. Bowie Wilson might be just as bad for Katie as an entire carton of rocky road ice cream, but he looked just as temptingly scrumptious.