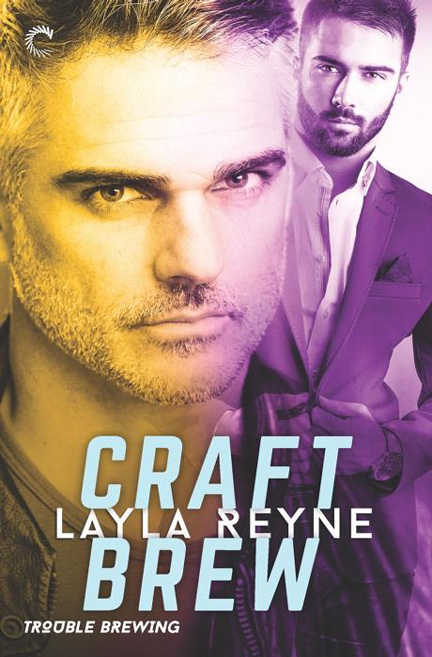 “CRAFT BREW is a fast-paced, suspenseful novel that will take you on an emotional thrill-ride from beginning to end. I couldn’t stop turning the page to find out what happened next!” — Hailey Turner, bestselling author of the Soulbound series and Metahuman Files series

“I loved this book. In the second installation of the Trouble Brewing series the relationship between Nic and Cam is stretched to breaking point, as Nic’s troubles circle ever closer and they have to delve into Cam’s past. Layla Reyne infuses the story with all her trademark action scenes and taut plotting, but she never loses sight of the romance at the centre. This is both hot and touching, and remains the spark that totally lights up this series.”  — Lily Morton, author of the bestselling Mixed Messages series

Craft Brew, out now, is the second book in the Trouble Brewing series, and features Federal prosecutor Dominic Price and FBI agent Cameron Byrne, along with a cast of secondary characters, some of who previously appeared in my Agents Irish and Whiskey series. Trouble Brewing can be read as a standalone series, but you’ll definitely get a fuller picture of the world if you read both series. Building out the “Whiskey Verse” has been one of the great joys of writing the past three years. I love settling in with my characters, in their usual spaces, and getting a real sense of how they live, work and love. It takes time and careful planning—hello ever expanding series/world bible—but it makes for a truly immersive experience for me as a writer and hopefully also for readers. I think the reader in me is why I gravitate to writing universe sort of series, because I love them, and these are just a few of my favorites:

Kristen Ashley’s Colorado/Burgh Series – KA was my first deep-dive into romance, and with those Nightingale boys and Luke Stark popping up all over, from Colorado to Indiana, her world is big and bright and the people in it and their love stories are the stuff weekend binge reads are made of. Familiar faces pop up in unexpected places, and loyal, long-time readers are treated to Easter eggs like t-shirts and bar mats traveling across the States and books.

Sloane Kennedy’s Protectors/Barrettis/Finding Series – I have the reading order for this universe saved on my computer, and I am working my way through it, loving Sloan’s men and the families they form, especially of the found family sort. This is one of the best universes for that. Family knows no bounds, including series, and it’s fabulous! But given the tragedies that befall Sloan’s main characters, they need all the support they can get. With friends and lovers by their sides, they always make it through and find happiness on the other side.

Mary Calmes’s Chicagoland Series – Cops, Marshals and more populate Mary’s contemporary and romance suspense series, and it’s a blast watching them cross paths, take down foes together, and reach their happily ever afters at work and in love. Seeing Sam and Jory from the Matter of Time series doing so well and being settled in the Marshals series really was the best kind of reader reward. Assistant US attorney Dominic Price is staring down the barrel of his father’s debts. The bull’s-eye on his back makes him a threat to everyone he cares about, so when his lover wants to go public with their relationship, he bolts. Not because he isn’t in love—he can’t stomach the thought of putting Cam in danger.

Kidnap and rescue expert Cameron Byrne is determined to figure out what trouble Nic is running from, but devastating news from home brings him back to Boston and to the cold case that has haunted his family for two decades. Shoving aside his pride, he calls Nic for help.

Together they search for answers, navigating the minefield of Cam’s past. But when they get too close to the truth, Cam must use every skill in his arsenal to save the man he loves…before it’s too late.

Four words that should have resulted in amazing sex round two.

Not that Cam had ever uttered those words before, but from what he understood, they usually brought a couple closer, including a celebratory tumble in the sheets. Perfect as he and Nic were already there, naked and sweaty from amazing sex round one.

Nic’s understanding, however, was apparently not the same as Cam’s. He stiffened in his arms one second and scrambled out of bed the next. Levering up, Cam braced a hand on the mattress and watched the giant cypress inked on Nic’s back sway with his mad dash to the bathroom.

“Never known you to run from an argument, Counselor!” Technically, they’d not been arguing, but Cam knew the start of one with Nic as well as he knew the other man’s taste. Arguing was what they did best, even better than sex.

“That’s not what I’m doing,” Nic hollered over the running water.

Cam flopped back onto the bed, staring at the ceiling. “Sure as fuck could have fooled me.”

About the Author:  Author Layla Reyne was raised in North Carolina and now calls San Francisco home. She enjoys weaving her bi-coastal experiences into her stories, along with adrenaline-fueled suspense and heart pounding romance. When she’s not writing stories to excite her readers, she downloads too many books, watches too much television, and cooks too much food with her scientist husband, much to the delight of their smushed-face, leftover-loving dogs. Layla is a member of Romance Writers of America and its Kiss of Death and Rainbow Romance Writers chapters. She was a 2016 RWA® Golden Heart® Finalist in Romantic Suspense.