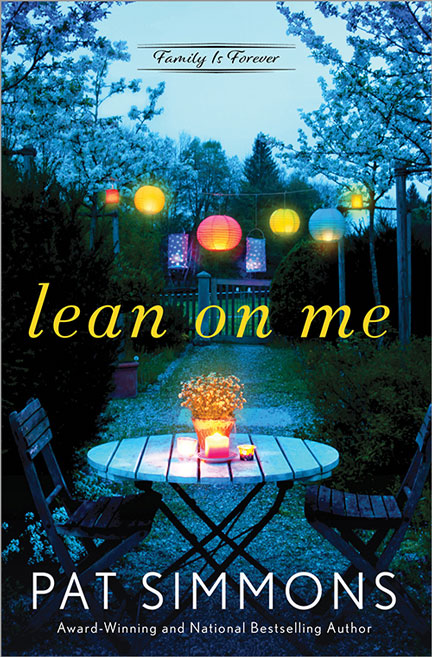 In Lean on Me, Tabitha Knicely is overwhelmed with sorrow and exhaustion caring for her beloved great-aunt, whose dementia is getting worse. When her neighbor Marcus Whittington accuses Tabitha of elder neglect, he doesn’t realize how his threats to have Aunt Tweet taken away add to Tabitha’s pain.

Then Marcus gets to know the exuberant elderly lady and sees up close how hard Tabitha is fighting to keep everything together. Tabitha finds herself leaning on Marcus more and more. And he’s becoming more than happy to share her burdens… No one should have to go it alone…

Tabitha Knicely is overwhelmed with sorrow and exhaustion caring for her beloved great-aunt, whose dementia is getting worse. When her neighbor Marcus Whittington accuses Tabitha of elder neglect, he doesn’t realize how his threats to have Aunt Tweet taken away add to Tabitha’s pain.

Then Marcus gets to know the exuberant elderly lady and sees up close how hard Tabitha is fighting to keep everything together. Tabitha finds herself leaning on Marcus more and more. And he’s becoming more than happy to share her burdens…

Tabitha needed to refocus as she smiled lovingly at her aunt. Beginning today, Aunt Tweet would stay at an upscale adult day care while Tabitha began her first day at a new job.

After getting the milk carton out of the refrigerator, Tabitha walked back to the table and poured some into Aunt Tweet’s bowl. Chalking it up to another sad oddity of dementia, she was determined to keep happy memories in the forefront of her mind as she kissed her aunt’s cheek.

“Thank you, ma’am.” Aunt Tweet giggled, adjusting Tabitha’s red, floppy hat on her head. Since her arrival, her aunt had fallen in love with that hat and wore it practically every day, regardless of her ensemble. “I took a little walk around God’s green earth.”

“What?” Tabitha didn’t like the idea of her aunt out of her sight. “Without me?” It was easy for anyone to succumb to the tranquility and abundance of green space in Pasadena Hills, which rivaled the nearby Norwood Hills Country Club. But in the midst of that apparent peace, they were still on the outskirts of a neighborhood not nearly so safe. It definitely wasn’t safe for Aunt Tweet to wander. Tabitha shivered at the thought of worse-case scenarios.

“That’s okay.” She hugged her aunt. “Next time, wake me and I’ll go with you.” She yawned, recalling her previous night’s lack of sleep. Her aunt had wanted to reminisce about her years as an airline stewardess, and Tabitha had indulged her before all of Aunt Tweet’s memories would slip away. Researchers had yet to find a cure, so Tabitha hoped God would reveal a cure to eradicate or reverse this terrible disease before it was too late for her aunt.

All of a sudden, Aunt Tweet dropped her spoon, spilling milk onto the table. “I left my scarf…I left my scarf!” Panic-stricken, she trembled and scooted her chair back.

Startled, Tabitha’s heart pounded, so she patted her chest to aid her breathing to return to normal. “It’s all right. I’ll get it from upstairs,” she said, reassuring her aunt that it was okay to forget things sometimes.

While staying with Kym, Aunt Tweet had worked herself into hysterics over the vintage scarf she had gotten as an engagement gift. Her aunt boasted she’d gotten rid of the husband but held onto the expensive shawl. There hadn’t been any peace in Kym’s house until she’d found it behind a pillow on the sofa.

“No!” Aunt Tweet shrieked, shaking her head. “On that porch. We’d better hurry.”

Confused, Tabitha tried to calm her down to figure out what was going on. “On my porch?” When her aunt shook her head, Tabitha asked, “Whose porch?”

Dread seemed to pour over Tabitha like a downpour. “Okay, okay.” Of all the days for a distraction, this was not a good one. This was her first day on a new job. As a pharmaceutical sales rep, Tabitha could recite medical terms, facts, definitions, and clinical studies’ results in her sleep. She’d entered college as a biology major and graduated with a bachelor’s in business. The pharmaceutical industry gave her the benefit of both worlds. Plus, she thrived on studying the physiological, anatomical, pharmacological, and scientific properties of medicine, so she could communicate the benefits of the company’s products.

But family was family, so taking her duty as a caregiver seriously, Tabitha had resigned from her job of six years as a senior pharmaceutical sales rep to ease the stress of the demanding position. Not wanting to leave the field completely, she took a pay cut to work in a smaller territory with a competitor who demanded little to no overnight travel. The sacrifice was worth it. Plus, her aunt’s trust fund designated the money for her own care.

Tabitha rubbed her forehead. “Let me put something on, then we’ll go find it.” Tabitha raced upstairs, hurried into her clothes, then grabbed her briefcase. Minutes later, she almost slipped while rushing down the stairs in her heels.

She reentered the kitchen, and Aunt Tweet wasn’t in sight. Tabitha checked the adjacent family room, then peeped outside toward the patio. Her aunt was behind the wheel of Tabitha’s rental car. Not good. She hadn’t purchased a car in years. A perk for being a sales rep, after she completed her two-week training, which started today, would be a company-issued vehicle.

After locking up the house, she had to convince Aunt Tweet, who had worked herself into a frenzy, that she couldn’t drive. Tabitha had to coax her own self to have patience while following her aunt’s conflicting directions, thinking, I can’t be late for my first day on the job.

“That’s the place!” Aunt Tweet yelled as Tabitha jammed on her brakes in front of a stately, story-and-a-half, older brick house she had never noticed before. The massive front door was centered under an archway. Twin french doors with mock balconies were on both sides of the entrance.

“I don’t see anything.” She craned her neck, admiring the impressive work of building art.

Aunt Tweet snapped, “I told you that’s the porch.”

“Okay.” There is no reason for your sharp tone, Tabitha thought but dared not voice. This house wasn’t that close to hers at all. Despite some mental deterioration, there was nothing wrong with her aunt’s physical stamina. She had obviously cut through the common ground area among the houses to get here.

After parking her car, Tabitha got out and surveyed her surroundings to make sure she wasn’t being watched. “This is crazy, sneaking up to somebody’s house,” she muttered to herself. Since the coast was clear, she hurried toward the red scarf that was snagged on a flower in a pot and flapping in the wind. She was within her reach when the door opened. Tabitha jumped back, then steadied herself in her heels.

An imposing man filled the doorway. Under different circumstances, he would be breathtakingly handsome. That was not the case now. Judging from his snarl and piercing eyes, Tabitha felt as if she had walked into the lion’s den.

Pat Simmons is an author of more than thirty-five titles and a self-proclaimed genealogy sleuth who is passionate about researching her ancestors, then casting them in starring roles in her novels. Pat holds a B.S. in mass communications from Emerson College in Boston, Massachusetts. She has worked in various positions in radio, television, and print media for more than twenty years. For fourteen years, she oversaw the media publicity for the RT Booklovers Convention. She lives with her husband in Florissant, Missouri.

One Response to Lean on Me by Pat Simmons