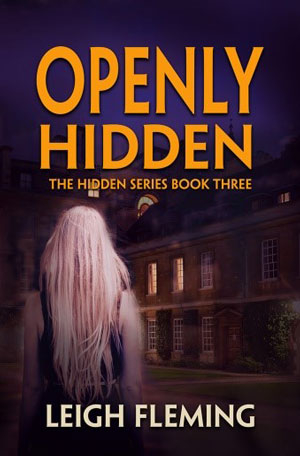 OPENLY HIDDEN, a romance wrapped in a mystery, is set in the fictional town of Mountcrest, West Virginia, and on the campus of Mountcrest University. The idea for this book came to me a few years ago while I served on the Board of Trustees at my alma mater, West Virginia Wesleyan College. During that time I learned so much about student recruitment and retention, institutional finances, buildings, academics, athletics, campus security, and so much more. Little did I know at the time a seed was being planted which would grow into OPENLY HIDDEN. The description of the campus and the town of Mountcrest are based on Wesleyan and the town of Buckhannon.

But that’s where their similarities stop. The characters and plot are purely fictional—simply a creation of my active imagination.

OPENLY HIDDEN, published by Soul Mate Publishing, is the third romantic suspense novel in the Hidden Series, and features private investigator Vanessa, and Alex, an FBI special agent. All three books are set in central West Virginia, an area surrounded by beautiful mountains and rugged terrain—the perfect setting for a murder mystery. This was Olivia Trammel’s last case.

No more late night surveillance outside seedy motels, or tracking down dead-beat dads eighteen months behind on child support, or catching a stay-at-home mom at the casino, gambling away the PTA’s fundraising money. Insurance fraud, accident reconstruction, background checks, and everything in between could be left to someone else. She was getting out. Right after she got the goods on Mountcrest University.

A few weeks ago, Olivia and her dad, licensed investigators at Trammel Investigations, had sat in the conference room with Preston Minker, partner at Martin, Minker, & Biddle Attorneys-at-Law, one of Brooklyn’s finest plaintiff firms, and his client Maria Sanchez. Mrs. Sanchez had retained the law firm, and they in turn had hired Trammel Investigations to get dirt on Mountcrest University. Maria Sanchez’s daughter, Amanda, had gone missing from the school three months prior, right at the end of the spring semester, and had yet to be found. Mrs. Sanchez was convinced the university had been negligent in keeping her daughter safe. A lawsuit was pending.

“I should’ve never let Amanda go to that God-forsaken school,” Mrs. Sanchez had said as she’d wept into a fistful of tissues. “Down there in the backwoods. It’s practically a third world country.”

“We’re going to find out what happened to your daughter, Maria,” Olivia’s dad wheezed as he patted the distraught mother’s hand.

“My dear, sweet Amanda had a big heart. She wanted to join the Peace Corps when she graduated. Always wanted to help those less fortunate. That’s why she went to college in West Virginia,” Mrs. Sanchez had said.

“Did you ever visit your daughter at the university?” Mr. Minker had asked.

“No, but I wish I had. If I had known how unsafe that town was, I would’ve convinced Amanda to come home. I couldn’t afford to fly down there.” She dabbed at her eyes as a thought came to her. “Do they even have airports in West Virginia?”

“I’m sure they do.” This time her Dad had taken Mrs. Sanchez’s hand and held it in his own. She lived in their building, and Olivia had often seen her father speaking in hushed whispers with the attractive, single widow in the lobby. Olivia had always wondered if they’d had an intimate relationship, or if her dad had just been smitten with the dark-haired beauty.

“She got a good scholarship, but even with her grants and student loans, she had to work to cover living expenses. I wasn’t able to save up for college, raising her on my own.”

“You’re not alone in that, Maria.” Olivia read the apology in his eyes as her dad glanced over at her. “A lot of kids pay their own way.”

“The cost was so high she had to move off campus.”

“Where was she last seen?” Mr. Minker had asked.

“The state police told me she’d last been seen at the library. She’d been there studying for a final exam.”

“Who reported her missing?” The attorney had continued his questioning. Author Leigh Fleming creates unique characters facing life’s challenges, but who are always rewarded with their happy ending. Her latest release, Openly Hidden, is the third book in her romantic suspense Hidden series published by Soul Mate Publishing. Stay Hidden, the first in her Hidden series, won the Lone Star Writing Contest for romantic suspense in 2017. She’s also writes contemporary romance in her Whatever series, mostly set in her home state of West Virginia. Whatever It Takes is the latest book in the series.

Thanks so much for reading about OPENLY HIDDEN! Please check out the other two books in the series, STAY HIDDEN and KEPT HIDDEN. Please leave a comment below for a chance to win a $10 Amazon gift card.