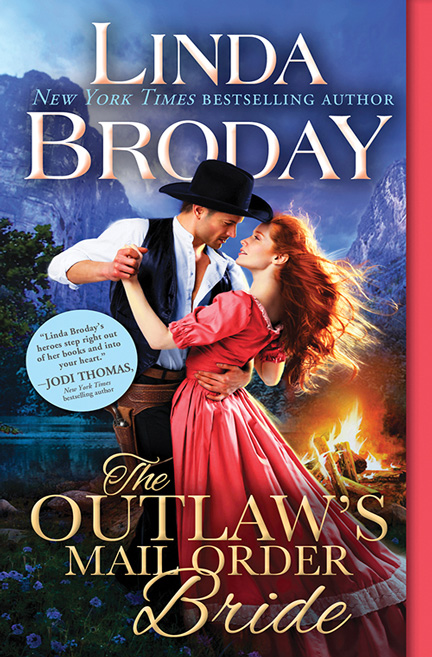 Former outlaw Clay Colby is abuzz with his mail order bride’s expected arrival. He’s fought long and hard to drag Devil’s Crossing out of lawlessness…so when his homestead is set ablaze by a bitter rival, he’s heartbroken. There’s no woman in the world who’d stand by him now.

But Tally Shannon is no ordinary woman. Former outlaw Clay Colby is abuzz with his mail order bride’s expected arrival. He’s fought long and hard to drag Devil’s Crossing out of lawlessness…so when his homestead is set ablaze by a bitter rival, he’s heartbroken. There’s no woman in the world who’d stand by him now.

But Tally Shannon is no ordinary woman.

After escaping the psychiatric hospital in which she was wrongfully detained, Tally only wants someone to protect her and the little girl under her care. She doesn’t mind that Clay’s home is dang near burned to the ground—not when he makes her feel so safe. So cherished. But it’s only a matter of time before the ghosts of her past come calling…and her loving cowboy must defend his new bride—and the family they built together—to his very last breath.

Clay and Tally stood on the rim of the bluff overlooking Devil’s Crossing. The outlaw town was invisible below, cloaked by the rocks and brush. He turned to face the woman he would vow to care for and protect with his life.

Tall and graceful, Tally wore the sunny lemon dress she’d arrived in the day before. And Clay had nothing fancy either—just plain, everyday clothes, which were good enough.

Eyeing her dress, Clay could see a place where she’d mended it. There were probably others as well. He made a silent vow to buy her the prettiest dresses he could find the next time he went to a town of any size. And he’d make her a new pair of boots to replace the shabby ones she wore. Although she tried to hide it, he could tell by her limp that her feet killed her.

Something had happened. While his lady was held in Creedmore? Maybe.

His lady. The words didn’t seem real yet. He reached for her hand and found it a chunk of ice. But the scared angel he’d held last night had vanished. In her place stood the bold, self-assured woman he’d first met. She didn’t smile.

He studied her proud profile, facial bones delicately carved. A full, lush mouth. And her hair—wind-whipped strands of fire. Something stirred inside him.

“Are you sure about this, Tally?”

“So will I.” Maybe this once the bride wouldn’t walk away and leave him before the ceremony. But they had yet to speak their vows. At least she’d left off her gun and holster, although he suspected she was rarely without the hardware.

He’d guard her and the child with his life. They’d given him a reason to keep breathing.

Ridge Steele, tall and somber in his black frock coat, stood before them with his tattered Bible, his gun hanging from his hip. He hated to be pressed into service—a reminder that he still couldn’t reconcile his past deeds with his teaching. Like them all, he struggled to find his way.

“We’re gathered here on this fine morn to join Clay and Tally together as one mind, one heart, one purpose,” Ridge began.

Violet, wearing a crown of braided daisies, removed her hold from Bullet and clutched Tally’s dress. Clay glanced down at her upturned face and winked before he remembered she lived in darkness. He ached for the pretty little golden-haired girl. He couldn’t imagine such a life with peril at every turn that she couldn’t even run from.

He swung his attention back to Ridge and repeated his vows. His eyes misted as he realized all a marriage entailed. From now on, he had to put Tally and Violet before his own needs. That was the true mark of a man.

“Do you have a ring, Clay?” Ridge asked.

“Of sorts.” Clay fumbled in his pocket for the ring he’d found nestling in the sack of coffee beans. He took Tally’s right hand and looked deep into her eyes. “This isn’t much, but it’s all I have right now.”

He slipped the silver band on her finger. The small, sparkly stone glittered in the sun, but he stifled a curse when he realized that it was too large. “Sorry about the fit.”

“It’s perfect.” Tally gave his hand a reassuring squeeze but still didn’t smile. “I’ll wrap string around the band and it’ll be fine.”

“Just until I can do something better.” She was clearly used to settling for less but Clay would one day get her a ring that fit or die trying.

Ridge concluded the ceremony. “You may now kiss the bride, Clay.”

Swelling with emotion, Clay pulled his beautiful Tally close and lowered his mouth. At the touch of her lips, warmth swept the length of his body.

He slid an arm around her and splayed a hand on the curve of her back. Happiness surged, making him tremble. He was no longer alone, and he asked for nothing more.

This marriage might not be perfect, but they’d try to find a way to make it work.

Whether intentional or not, Ridge had left out the obeying part from Tally’s vows. Thank goodness. Already this early in their marriage, Clay knew that the words obey and Tally were never to be uttered together. She was a free, independent spirit.

The kiss ended and Tally raised her eyes. “Mr. Colby, we’d best get out of these clothes and get busy. The day’s wasting.”

“Yes, ma’am.” Clay doubted ten sticks of dynamite could wipe the grin off his face. He took Violet’s hand. “Let’s go, pretty girl. I’ll walk you to the wagon.”

She panicked. “No, I want Mama Tally.”

“Okay, honey.” It was all going to take getting used to. And maybe even longer for someone who couldn’t see his face.

“Give her time, Clay.” Tally solemnly met his glance. “She doesn’t trust men but she’ll come around.”

“I have all the patience in the world for her—and you.” Yes, maybe even love over time. If he played his cards right.

Still a bit hesitant and unsure of her reaction to his touch, he slipped his arm around her waist and leaned close, inhaling her fragrance. “How did you like the sunrise, Tally? I ordered it specially for my beautiful bride.”

“The sky, the ceremony was everything I’d hoped. I never thought you’d have a ring though. It’s pretty and I don’t care that it came free with coffee beans.” And then she smiled for the first time since he’d met her, and he’d never seen anything so dazzling.

It felt as though he’d just emptied a full bottle of whiskey in one gulp.

At a young age, Linda Broday discovered a love for storytelling, history, and anything pertaining to the Old West. After years of writing romance, it’s still tall rugged cowboys that spark her imagination. A New York Times and USA Today bestselling author, Linda has won many awards, including the prestigious National Readers’ Choice Award and the Texas Gold. She resides in the Texas Panhandle where she’s inspired every day.