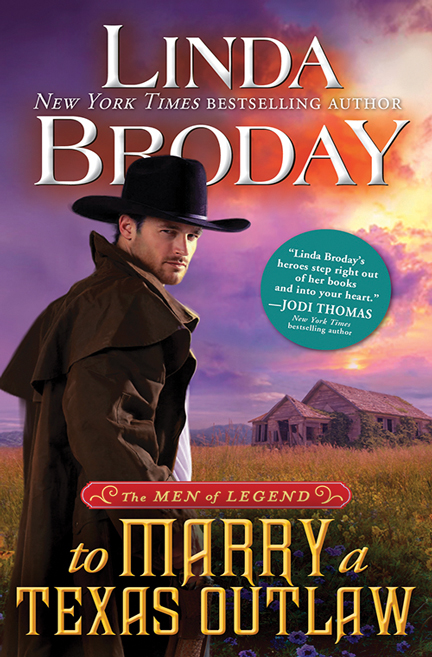 In Linda Broday’s TO MARRY A TEXAS OUTLAW, outlaw Luke Weston survives by his wits. On the run for a murder he didn’t commit, the last thing he needs is to go looking for more trouble. But when Luke stumbles across a fiercely beautiful woman struggling against two heavily armed men, it’s obvious that trouble has found him.

After all, he never could resist a damsel in distress. The MEN of LEGEND

Outlaw Luke Weston survives by his wits. On the run for a murder he didn’t commit, the last thing he needs is to go looking for more trouble. But when Luke stumbles across a fiercely beautiful woman struggling against two heavily armed men, it’s obvious that trouble has found him.

After all, he never could resist a damsel in distress.

Josie Morgan’s distressed, all right—and hopping mad. She has no idea why she’s been kidnapped…or who she is…or why her body melts for the mysterious gunslinger who saved her life. But as the lost memories come tumbling back together, Josie is faced with the stark reality of why she and Luke can never be…even as her heart is telling her she will always be his.

Lawmen surrounded the wagon and forced them to stop.

“Morning, gentlemen,” Luke drawled. “Mind getting out of our way?”

“We’re looking for a woman.” The old sheriff had a crooked nose that must’ve been broken countless times.

“Me. His wife,” Rose interrupted and gazed with what she hoped was adoration up at Luke. “Don’t be shy saying it, sweetheart. But it’s still sort of new, I reckon.” She cupped his jaw and turned to the riders. “You see, we were married two weeks ago and we’re on our honeymoon. My darling sugarplum promised to take me to Fort Worth.”

She pressed her lips to his in a long, searing kiss. He didn’t respond for a moment, then shock and thrilling tingles rippled over her as he kissed her back. When she parted her mouth, he slipped his tongue inside as bold as you please. His hand curled just under her breast and sent waves of aching hunger through her.

“Oh, dear sir, but we do mind,” she murmured against Luke’s mouth. “Very strenuously.”

“Sorry, ma’am,” another of the posse tried. “Give us a quick word and we’ll be on our way.”

Luke raised his head. “My wife Rose is very…passionate. Why are you looking for this other woman?”

Rose gasped. “My heavens, how horrible. Did she shoot him?”

“Oh no, ma’am, nothing that tame,” said the lawman with the mole. “She gutted him.”

“Where did this take place?” Luke asked, nuzzling Rose’s neck.

“Do you know her name by chance?” Rose asked quietly.

“Josie. Josie Morgan,” the man answered. “From the description, she’s the spitting image of you, ma’am.”

She shivered even as Luke’s arm tightened around her. Could she have done something like that? Was she a murderess?

“If we happen to spot her, we’ll report it to the first lawman,” Luke promised. “Now, if you don’t mind, we have somewhere to be and my wife, bless her sweet soul, is a very impatient woman.” He winked at the posse. “You fellows remember what it was like to be newly married, don’t you?”

A murmur of agreement came from the group.

Rose glanced down and her heart pounded to see the duster had slipped, exposing a big portion of her bloody skirt. Slowly, so as not to draw the lawmen’s gaze, she tried to tug the shield back into place.

“Say, don’t I know you, mister?” One of the lawmen in the back, a younger man, moved forward, staring at Luke. “What’s your name?”

Rose held her breath as Luke’s hand inched slowly down toward his Colt. Desperate to draw the riders’ attention, she loosened the top buttons of her dress and moved the fabric aside. “My goodness, I’m so hot!” She touched her cheek with a fingertip and drew it painstakingly down the long column of her throat, past her collarbone and into her cleavage. The young lawman swallowed hard.

“Name’s Jones. I’m from Tascosa,” Luke drawled. “The town’s wild and woolly but it’s where I met my beautiful Rose and tied the knot.”

“I never thought I’d ever find such a handsome man to give me a second look.” Rose batted her eyelashes. “Ours is a match made in heaven.”

“I must be mistaken.” The young man turned aside, mumbling to himself.

The hawk-nosed marshal leaned over. “There’s a lot of blood on your dress, ma’am. What happened?”

Panic raced through Rose. “Blood? Oh, good heavens no!” She forced a giggle. “This is nothing but red mud. My mama always complained about the North Texas red dirt and was never able to get it to wash out of anything.”

She patted his vest. “Sweetheart, these men don’t have time to be gossiping like that! They simply have to find that Morgan woman before she kills again.”

The men shook their heads, chuckling, but one leaned forward for a better view.

“Sorry to have held you up.” The old sheriff touched the brim of his hat and the group galloped off, kicking up a cloud of dust around the wagon.

Luke jiggled the reins and the team began to move. “What the hell was that back there?”

Her spine stiffened. “What do you mean?”

“Wait one minute. If I recall, you didn’t appear to object.”

“You enjoyed every second of that,” Luke accused.

Luke glanced back to check on the lawmen. “Where did that performance come from?”

“I noticed a spark of recognition in that young one’s eyes and I knew I had to save you. He was a step away from arresting you.” She thought he’d at least be grateful for her efforts.

“Don’t ever try to save me again.” Luke’s voice held a sharp edge. “I’ll only get you hurt—or dig you a grave.”

At a young age, Linda Broday discovered a love for storytelling, history, and anything pertaining to the Old West. Cowboys fascinate her. There’s something about Stetsons, boots, and tall rugged cowboys that get her fired up. A New York Times and USA Today bestselling author, Linda has won many awards, including the prestigious National Readers’ Choice Award and the Texas Gold Award. She resides in the Texas Panhandle and is inspired every day.

Enter to win a copy of To Love a Texas Ranger by Linda Broday!

One Response to Linda Broday’s To Marry a Texas Outlaw