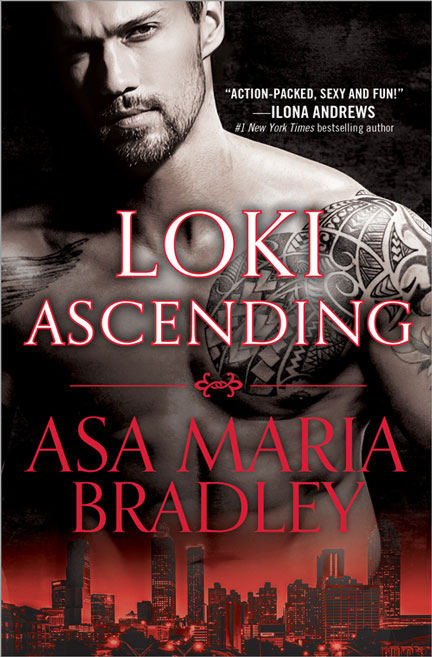 In Asa Maria Bradley’s LOKI ASCENDING, Loki wants to end the world, Only they can stop him—but at what cost?

Irja is an immortal Viking healer, but she hasn’t used her true powers for centuries. The last time she did, someone close to her ended up dead. So instead she relies on medicine and science to protect her tribe while denying her feelings for Scott. But the Viking warriors are falling mysteriously ill, and without magic, Irja’s knowledge of healing isn’t enough… LOKI WANTS TO END THE WORLD

Only they can stop him—but at what cost?

Irja is an immortal Viking healer, but she hasn’t used her true powers for centuries. The last time she did, someone close to her ended up dead. So instead she relies on medicine and science to protect her tribe while denying her feelings for Scott.

But the Viking warriors are falling mysteriously ill, and without magic, Irja’s knowledge of healing isn’t enough. When the trickster god Loki offers her a cure, it comes with a steep price that could cost Irja everything. She needs Scott’s help, the man whose loyalty to the Vikings is unmatched, whose love for Irja cannot be broken—and whose inner fury has yet to be unleashed.

Irja took another breath. Beyond the Norse magic borders that protected the house, shades of red and orange twirled and swooped, undulating like a giant caterpillar across the landscape. This was the native magic of the Arizona desert. It lacked the ordered structure of the Norse spells, and its untamed nature made it powerful and unpredictable.

As if the energy noticed Irja tuning in to its presence, the twisting and twirling stopped. She held her breath. The red enveloped the orange and together they became a hot glowing ball. From this bright sphere, tendrils of red energy extended toward Irja, beckoning to her. In her sleep-deprived state, she almost lowered her shielding as if she were about to harness the energy and refill the wells inside her that had been empty for millennia. She’d given up practicing magic when she was a little girl. The power always demanded a sacrifice and usually the price was too steep to pay, as she had painfully learned.

Her berserker stirred and growled. The warning from her inner warrior spirit snapped Irja back into control, and she quickly reinforced her shields against the magic’s pull. The effort required more energy than it should and she grimaced.

The quiet swoosh of the door opening had her quickly schooling her features before turning to greet whomever had joined her. “King Erik,” she said and bowed her head.

“Please. No need for formality. There are important things we must discuss, and I’d rather you just spoke freely. If I have to follow court protocol, it will take forever.”

Irja raised her head to find his cornflower-blue eyes lit with humor, but the strain around the corners showed the king’s worry. He was taller than her six-foot frame by about two inches, and she had to tilt her head back a little to meet his gaze. “As you wish.” Suddenly, she swayed on her feet and gripped the railing. What had she been thinking, leaving herself so unguarded that the magic could seek her out?

The king reached out and gently grabbed her elbow, steadying her. “Are you okay, Ms. Vainio?”

Irja wiped her forehead and forced a smile. “Please call me Irja. I’m just tired.” Hopefully, the king would believe her lie. Sweet Freya, she couldn’t afford to be that careless. She needed to be extra vigilant here. Washington State’s volcanic rock’s magic was easy to shield herself against after living so many years within it. The ancient Sedona red desert’s magic was hundreds of millennia older and so very wild and free. It would tempt the most disciplined practitioner with its promise of raw power.

“Irja,” the king repeated. “Then you must call me Erik.” He released her elbow.

That would probably never happen, but Irja nodded. “I’m afraid I don’t have any good news. I still don’t know what’s wrong with your warrior. My main concern right now is to reduce her fever. I have given her modern drugs as well as herbal remedies, but so far, I haven’t seen results. She is still very agitated, so I gave her a mild sedative to make her rest.”

“It is a comfort to me and my tribe just to have you here to take care of Kari. Odin willing, she will recover and fight again.”

Irja forced a smile on her face, but the truth was that she had no idea how to wake Kari or lower her temperature. In her current state, the high fever might severely damage that Valkyrie’s cognitive abilities. The extreme temperature was literally cooking the warrior’s brain. It was tempting to open herself up to all the glorious red-hot magic just beyond the walls. To allow that energy to flood her body and channel it into a healing burst of power that could possibly cure the feverish Valkyrie. But the magic burst could just as easily kill Kari. Or someone else.

She had once been young and cocky when it came to her abilities. Now she lived with eternal guilt and the goddesses’ punishment of a painful void inside her because she could never again risk to fill it with the energy of magic.

The pause in conversation was dragging into awkward territory, and Irja searched her mind for something to say, but she was too tired to get her thoughts to cooperate. Luckily, something distracted the king from scrutinizing her face, and he turned away.

“The warriors I’d sent tracking the wolverines are back from the desert,” he said just as the gate in the concrete wall opened. The king lifted a hand to shield his eyes and peered into the courtyard.

Irja mimicked his gesture and discovered her twin brother, Pekka, striding through the opening, closely followed by Ulf and a red-haired Viking she hadn’t met before. But it was the man bringing up the rear of the group that drew her attention. Scott’s physique had filled out in the year and two months since she’d last seen him. His athletic build spoke more of endurance than brute strength, but his shirt stretched over broad, defined shoulders and a well-muscled torso. Her berserker stirred.

“Excuse me,” King Erik said. “I must go ask the warriors about their mission.”

“Of course,” Irja mumbled. Her gaze lingered on Scott. As was always the case when she was near him, she couldn’t look away. He was her queen’s brother and had been her patient at one point. Both were excellent reasons for ignoring the restless feelings he always stirred within her. So she did what she always did when strong emotions threatened to rise—she retreated behind the protective walls she’d long ago learned would shield her from heartache and painted a blank expression on her face. But she still couldn’t look away from the dark, curly-haired man walking across the courtyard.

Originally a native of Sweden, ASA MARIA BRADLEY came to the United States as a high school exchange student, but decided to stay for the next couple of decades and add a few more degrees. She now lives in the Pacific Northwest. Learn more about the author at asamariabradley.com.