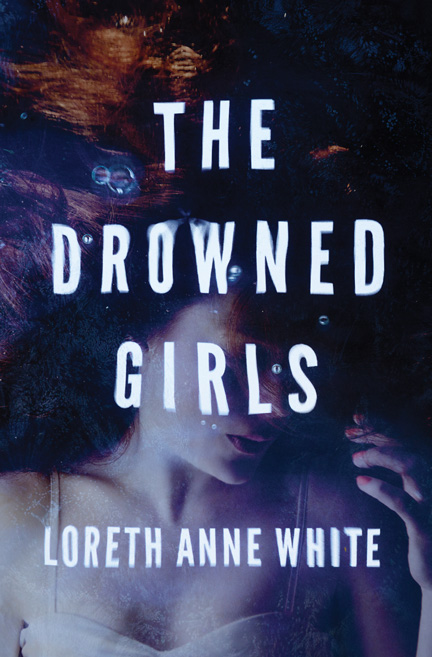 From Loreth Anne White: THE DROWNED GIRLS is book one in the Angie Pallorino series, a dark, gritty, atmospheric female-driven police procedural series with a romantic arc that develops over three books. In addition to the overarching romance, there is also an overarching mystery that ties deep into secrets about my heroine, Angie’s, past, secrets that will shake her very concept of self and identity, and put her and those around her in grave danger.

Thank you Romance Junkies for having me here to talk about my Detective Angie Pallorino and some other fictional crime-fighting heroines I love!

THE DROWNED GIRLS is book one in the Angie Pallorino series,  a dark, gritty, atmospheric female-driven police procedural series with a romantic arc that develops over three books. In addition to the overarching romance, there is also an overarching mystery that ties deep into secrets about my heroine, Angie’s, past, secrets that will shake her very concept of self and identity, and put her and those around her in grave danger.

The crimes Angie must solve in each individual book (THE DROWNED GIRLS, THE LULLABY GIRL and, THE GIRL IN THE MOSS), will inform this dark, overarching secret and seriously complicate her nascent romance with veteran homicide cop—James Maddocks—with whom she is forced to work.

A key focus of the series is sex, and the spectrum of desire, and where lines are crossed into deviance, dysfunction, addiction, and crime, and at the end of this spectrum, sexually-motivated homicide. Detective Angie Pallorino works in the sex crimes unit of the metro police department in her Pacific Northwest city, but in addition to hunting down sexual deviants she also has her own issues with sex, control, trust, and intimacy, for reasons that become apparent by the end of Book One. The villain in THE DROWNED GIRLS, the way he hunts, his desires, what he does, the way he devolves, is a dark echo—or mirror—of Angie’s own complicated journey, but in the end, while she might take the bad guy down, it’s learning to love, and to trust, that will help show Angie her own way forward.

Angie’s life, quite simply, is her job. It gets her out of bed in the mornings.

Everything she does is designed to prove herself to her male police colleagues, and to help the special victims she encounters daily—mostly vulnerable women and children. But exactly why she is so driven – now that would be a spoiler!! It’s something Angie will discover through the series.

My hope is that Angie will appeal to those who love female-driven suspense (with relationship issues) that features strong, determined heroines who chase down bad guys but who are also complicated souls because they’re deeply fractured in some way. Yet it’s this very brokenness that drives then, and makes them so damned good at their jobs. And makes them so understanding of the victims, and underdogs.

Some of my favorite crime-fighting heroines in this vein hail from television crime shows– Saga Norén from THE BRIDGE, Sarah Linden from THE KILLING, Olivia Benson from Law and Order’s SVU, Stella Gibson from THE FALL, Rachel Bailey from SCOTT & BAILEY, Vera Stanhope from VERA, Catherine Cawood from HAPPY VALLEY, and Ellie Miller from BROADCHURCH.

What I love dearly about all these fictional women is not that they’re kick-ass-go-in-with-guns-blasting-unafraid. They’re very much afraid when confronted with certain situations, and very much aware of their vulnerabilities as females in an often male-dominated world and work environment, but they face their fears anyway, and kick ass because of it. They also care—sometimes too deeply and too fiercely about those they’re charged to protect and defend. And they have the same human vulnerabilities and frailties that we all do—a need for friendship, for someone to love who loves them back. A desire to belong. To be valued and respected. And when they do finally get there, it’s hard won, and by damn they deserve it! He surfaced two years ago. Then he disappeared.

But Detective Angie Pallorino hasn’t forgotten the violent rapist who left a distinctive calling card—crosses etched into the flesh of his victims’ foreheads. When a comatose Jane Doe is found in a local cemetery, sexually assaulted, mutilated, and nearly drowned, Angie is struck by the eerie similarities to her earlier unsolved rapes. Could he be back?

Then the body of a drowned young woman, also bearing the marks of the serial rapist, floats up in the Gorge, and the hunt for a predator becomes a hunt for a killer. Assigned to the joint investigative task force, Angie is more than ready to prove that she has what it takes to break into the all-male homicide division. But her private life collides with her professional ambitions when she’s introduced to her temporary partner, James Maddocks—a man she’d met just the night before in an intense, anonymous encounter.

Together, Angie and Maddocks agree to put that night behind them. But as their search for the killer intensifies, so does their mutual desire. And Angie’s forays into the mind of a monster shake loose some unsettling secrets about her own past. How can she fight for the truth when it turns out her whole life is a lie? Loreth Anne White is an award-winning author of romantic suspense, thrillers, and mysteries. She has won the Romantic Times Reviewers’ Choice Award for Romantic Suspense, the National Readers’ Choice Award, and the Romantic Crown for Best Romantic Suspense and Best Book Overall. In addition, she has been a two-time RITA finalist, a Booksellers’ Best finalist, a multiple Daphne Du Maurier Award finalist, and a multiple CataRomance Reviewers’ Choice Award winner. A former journalist and newspaper editor who has worked in both South Africa and Canada, she now resides in the Pacific Northwest with her family.