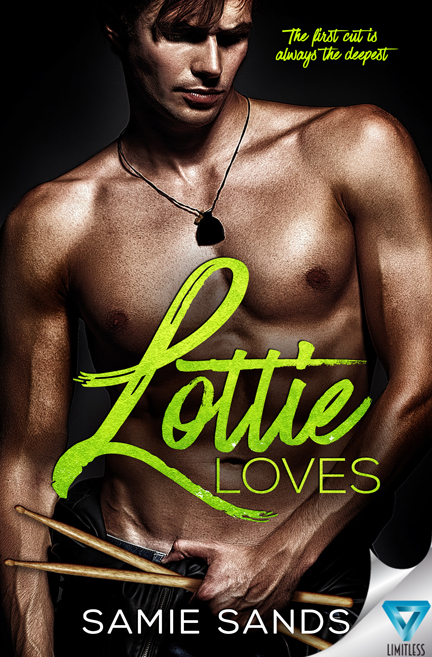 LOTTIE LOVES by Samie Sands. Don’t miss the giveaway below!

“Will you marry me?”

Four words I’ve waited my whole life to hear. Four words I was sure would change my life forever…and they did. Just not in the way I expected.

Finding out my extremely gorgeous rock star boyfriend was about to propose had the complete opposite effect I thought it would. Rather than catapult me into a future I’ve always wanted, it plunged me back to a past I tried to forget. “Will you marry me?”

Four words I’ve waited my whole life to hear. Four words I was sure would change my life forever…and they did. Just not in the way I expected.

Finding out my extremely gorgeous rock star boyfriend was about to propose had the complete opposite effect I thought it would. Rather than catapult me into a future I’ve always wanted, it plunged me back to a past I tried to forget.

Now I can’t get him out of my head. I can’t help but wonder what could have been, how our lives would have ended up if he didn’t leave me behind, a shattered mess.

All these memories are dangerous. They’re bringing my past back to ruin my future. And worst of all, they’re taking me right back to him, my childhood sweetheart, my first love…my biggest regret.

I yanked my phone angrily out of my pocket, not at all in the mood to talk to anyone, least of all the name that I saw plastered across the screen.

I rolled my eyes, almost stuffing the phone back in my pocket, really not wanting to speak to him. My mum had put me in the worst mood, and for the first time ever I wasn’t excited to talk to the man that I loved.

Just as my hand slid into my jeans, my heart pounded uncomfortably against my chest, and I rapidly changed my mind. I couldn’t ignore Danny, not when he’d done nothing wrong. Just because I was all shook up and pissed off, it wasn’t his fault. Plus I had no idea when he would call again, so I shouldn’t miss this opportunity.

“Hi…” I started, but Danny jumped in almost instantly, not letting me get a word in edgeways.

“Lottie? Are you okay? It isn’t true I promise you. I didn’t…it isn’t what it looks like…I…” He sounded panicked and stressed, which meant he wasn’t making any sense, causing everything within me to halt in shock. Danny was a pretty laid back person when it came to most things, so to hear him like that meant that something really bad had happened. I just couldn’t work out what it was…

“Woah, slow down,” I tried to sound calm, but even I could hear the hollow twinge to my tone. “What the hell are you going on about?” I stood outside the front door to my home, unable to even think about hunting through my bag for the key when something so potentially life changing was about to happen.

“You mean you haven’t seen it yet?” He gasped weakly, his words cracking painfully with emotion. I shook my head silently, waiting for him to continue. “I…I thought you hated me already. I thought you knew.” He panted a few times, and I noticed my breaths becoming as ragged as his, as if my body was trying to prepare me for what was to come next. “The newspapers…they’re saying some things. Some awful things…but they aren’t true I promise you.”

“What do you mean?” I asked, everything swirling around inside of me until I almost felt sick with it all. My brain wasn’t quite processing any of Danny’s words, but my body had already come to its own, very unwelcome, conclusion. “What the fuck are you saying Danny?”

“At the industry party last night…there was this girl…”

My heart sunk right down into my feet as I heard the words that every girl dreaded the most. I had certainly never been in that position before, but I knew many other girls who had—particularly the girls dating Craig—and I’d always looked on with a distant sympathy, not even slightly knowing what they were going through. I always knew without any uncertainty that the papers were printing the truth, yet when I found myself on the wrong end of it, I had no idea what to think.

His words trailed off while he waited sadly for me to respond, and I really wanted to. A million and one things flew through my mind, but none of them felt right. None of them expressed exactly how I felt at that moment. How was I supposed to tell him that he’d just whipped the foundation of my life out from under me, and that I now felt like I was freefalling into some crazy abyss?

I didn’t know what to say.

So instead, I clicked my phone off, and I allowed it to drop to the ground with an intrusive clatter.

A numbness quickly overcame me as I slumped to the cold, hard floor beneath me, as if my body had just given up. Had Danny really cheated? Had that actually happened? Maybe we had spent such a long time coasting along happily that it had finally come crumbling down around us.

Or maybe Danny was innocent, and I was jumping onto something because I needed something negative about him to grasp on to. Just to justify my uncertainty about his proposal, and everything that had come after.

The proposal…what the hell would happen about that now?