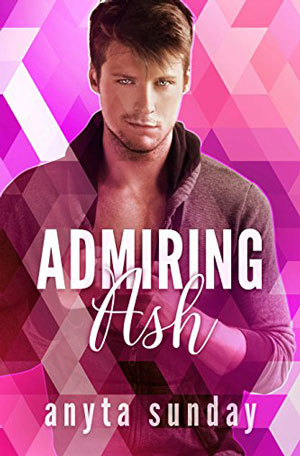 A is for Ash Heartford.

Abandoned by his parents and attached to only person—his little sister.

Attracted to River, the sultry man who saunters onto his doorstep with startling news.

Always yearning for more River, yet afraid to let him in.

Should he play it safe, or claim his legacy and risk losing his heart?

Hello, it’s Anyta! So great to be on Romance Junkies today and to be talking about my new sexy gay romance series, “Love Letters”. The first three books were just released on July 31st, and you can grab them now on Amazon (also available via Kindle Unlimited):

The stories are set in Greenville, CA, a town that has its fair share of alpha males, cocky bad boys and trust fund kids. These are the boys of Millionaire Row, at home in the swanky mansions by the river that’s dividing Greenville. Let’s meet these sexy hunks that are driving their lovers crazy in the first three “Love Letters”!

Known playboy and heart of every party, River has promised his late mentor Lester two things: to find Lester’s grandson, Ash, and pass on Lester’s bookstore; and to not get it on with Ash – under no circumstances, no way. But as he gets to know earnest and caring Ash, River’s resolve is about to melt away…

River drew in a sharp breath, and his heart did a dangerous dance. He wanted to take Ash in his arms and kiss him. Wanted to say to hell with this friendship bullshit. Go out with me. Let’s make it work.

He wanted Ash to say he was more than just having fun. That he wanted River.

Was this how unrequited obsession began?

River drove out of town.

He should curb these feelings. The insane bolting heat whenever he looked at Ash. The tender flutter in his chest as he admired Ash’s generosity and determination. The crazy, carefree laughs that Ash drew out of him with his quick quips.

Ash was supposed to be off-limits. A promise he should never have broken.

A promise he wanted to break again.

Landon (River’s twin brother) has been infatuated with playboy Chance for quite a while – so much that he’s totally blind to the love that’s right in front of him… his best friend Ben Spengler who would give anything to take their relationship to the next level. Will these two science geeks finally give in to their chemistry?

“Yeah, I know. But it’s asking a lot to kiss that mug more than I have to.”

Landon playfully scowled and dipped his face closer. Their noses grazed. “You smell of coconut. Did Madison make a new soap?”

“Kiss me. I bet we’ll have chemistry together.”

Ben rolled his eyes, stood on his toes, and lightly pressed their lips together.

The kiss was fleeting. Before Landon could blink, Ben was pulling back. It reminded him of the rushed swipe of their lips when they tied the knot.

Landon had thought that kiss perfunctory, like Ben wasn’t into kissing him at all. He’d misinterpreted. Not perfunctory. Shy.

Chance has everything going for him: money in the bank and looks that could kill. Except, lately he’s been messing things up more often than not – his friendship with Landon is on the rocks, his PA is gone and let’s not even talk about the stripper sinking his Lamborghini in the pool… But somehow, his new PA, Brook, is looking past the brash front, and what he finds might just be what he was looking for.

“See you tomorrow then?” Chance said.

Brook took Chance’s hand and a startled tremor passed up Brook’s arm, lodging in his chest. They stood in a similar position as they had this morning with Chance gripping roses.

Chance wasn’t scowling now. He looked at Brook like he desperately needed him. Like he wanted Brook to give him a reason to stay.

The day had been more than Brook could have wished. Chance might not be so certain, but he fit next to Brook, stalking the streets this side of the river. He’d opened himself more today than he had since they met.

Brook tugged Chance into his apartment. They kicked off their shoes, said a fleeting goodnight to his smirking Grandma, and then Brook pulled Chance down the hall.

His pulse ticked faster, hearing his name on Chance’s tongue. He backed into his bedroom, pulling Chance in with him. “You’re staying with me.”

There you have them – the first three boys of Millionaire Row! I hope you fall in love with them just much as I did. And if you can’t get enough of them, don’t worry, the next “Love Letters” are already on their way!

Welcome to Greenville. Come for the sexy boys. Stay for the HEA.

A bit about me: I’m a big, BIG fan of slow-burn romances. I love to read and write stories with characters who slowly fall in love.

Some of my favorite tropes to read and write are: Enemies to Lovers, Friends to Lovers, Clueless Guys, Bisexual, Pansexual, Demisexual, Oblivious MCs, Everyone (Else) Can See It, Slow Burn, Love Has No Boundaries.

My books have been translated into German, Italian, French, and Thai.

One Response to Love Letters Series by Anyta Sunday