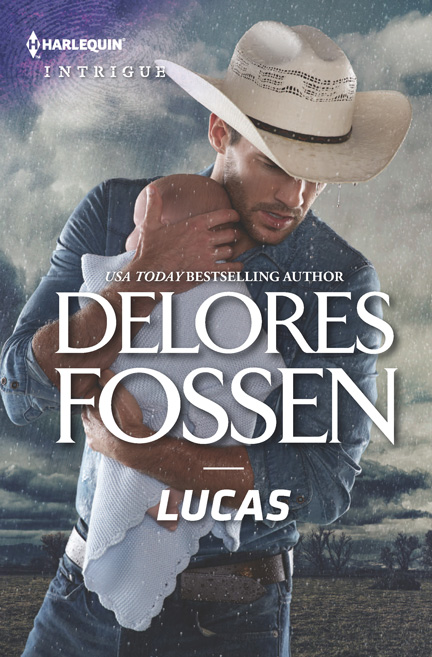 Lucas Ryland has always had a way with the ladies. That is, until Hailey Darrow dropped him after a single night of passion. Then he discovered her unconscious body in a wrecked car with a fake ID and enough money to disappear. Unbeknown to him, the one who got away was leaving town with his baby…

A short interview with Delores Fossen

What is your favorite part about writing LUCAS?

LUCAS is the 12th book in the Lawmen of Silver Creek series so I really enjoyed visiting with all the cowboy heroes from the previous stories. It was like going home to a family reunion.

Is there anyone who you based Lucas and Hailey off of, or who you drew your inspiration from?

I was inspired by Rayland Givens from Justified. I thought he had that edge that I wanted Lucas to have.

How many books have you written? Is there one that you would consider your favorite?

LUCAS is my 88th published Harlequin, and I’ve written 12 other books. It’s so hard to pick a favorite, but I think for now it’s BRANDED AS TROUBLE, an HQN that comes out July 1st.

When did you first realize that you wanted to be a writer?

I’ve been writing as long as I can remember, but I didn’t begin writing seriously until my kids were old enough to start to school.

What is your favorite thing about writing contemporary romance?

It’s fun to “build” the ranch where my cowboy heroes and heroines live. And, of course, the best part is creating happily-ever-afters for them.

That the books are easy to write and all the same. They’re very different, and they’re definitely not easy. It takes a lot of work to pull a story together.

What are a few of your favorite books? Do you have any recommendations?

I have SO many favorite books and authors. I love B.J. Daniels, Julie Miller and Lori Wilde. I also read Stephen King and Dean Koontz.

What are your future projects are you working on?

I’m working on three new HQN books for my Wrangler’s Creek series. They’ll be out in 2018.

Do you have any tips for people suffering from writer’s block?

I think it helps to make a schedule and then stick to it. That way, I know what I’m supposed to be doing every day.

Do you have any advice for new writers?

Write as much as you can and experiment with various ways to do the same scene. That’s how to learn the best way to tell the story. Lucas Ryland has always had a way with the ladies. That is, until Hailey Darrow dropped him after a single night of passion. Then he discovered her unconscious body in a wrecked car with a fake ID and enough money to disappear. Unbeknown to him, the one who got away was leaving town with his baby…

Now Hailey is out of her coma, but still in danger. However, hiding her at his Silver Creek ranch ignites old passions and introduces new threats. Lucas must use every protective instinct in his arsenal to keep Hailey and their infant son safe. And to keep his body from remembering how good it felt to hold her in his arms. DELORES FOSSEN is a USA Today bestselling author and an Air Force veteran who has sold millions of copies of her novels. She’s received the Booksellers’ Best Award for romantic suspense, the Romantic Times Reviewers’ Choice Award, and was a finalist for the prestigious Rita. She’s written more than 50 books and has nearly 100 short stories and articles published in national magazines.