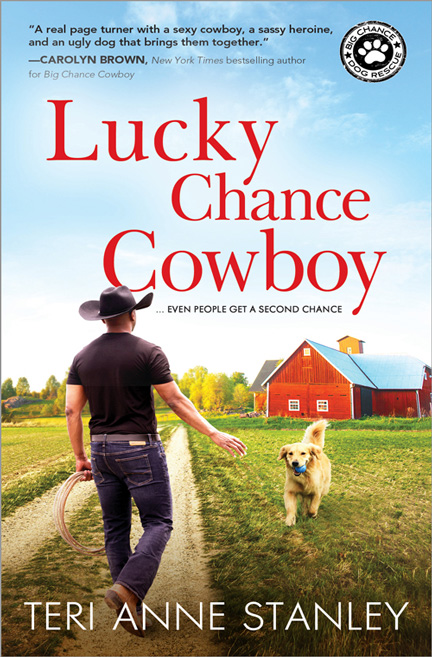 At Big Chance Dog Rescue, everyone can find a forever home

Marcus Talbott is a soldier through and through, and he’s not going to let an injury keep him from his Army unit. Sure, his last mission nearly broke his back, but that’s nothing his positive attitude and work ethic can’t fix, right? In the meantime, he’s got a place on the board at the Big Chance Dog Rescue, and flirting with his friend’s sassy sister, Emma, is a welcome distraction. At Big Chance Dog Rescue, everyone can find a forever home

Marcus Talbott is a soldier through and through, and he’s not going to let an injury keep him from his Army unit. Sure, his last mission nearly broke his back, but that’s nothing his positive attitude and work ethic can’t fix, right? In the meantime, he’s got a place on the board at the Big Chance Dog Rescue, and flirting with his friend’s sassy sister, Emma, is a welcome distraction.

Emma Stern is barely scraping by while working and caring for her elderly grandfather, but she’s running out of options—and hope. The last thing she has time for is Marcus and his flirting, sexy as he might be. But every time Emma thinks she’s reached the end of her rope, Marcus is there to lend a hand. Maybe there’s more to the handsome playboy after all…

Marcus’s ridiculous vintage muscle car was parked in its usual spot next to the barn, but he could have gone with Adam.

She thought about calling again, but what would she say? “Hey, I stopped out at the ranch to make sure you weren’t being held hostage by terrorists, but you’re not here”?

She decided she’d say hi to Jake, then head home and fume until it was time to fetch Granddad from day care. Day Club.

A quick movement from the other side of the frosted glass next to the door made her pause. She saw it again…a flash of something light passing by.

And then she heard it. A light thump, followed by more movement. One of the dogs was inside, jumping up and down by the window.

Another thump, and the flash—this time she realized it was a big, light-colored dog.

Adam’s D-Day was black. Lizzie’s dog, Loretta, was white, but would be in the kennels with her pups anyway. The only other option was Patton, Marcus’s big golden retriever, who never barked. Like, ever.

He was also trained to never leave Marcus’s side unless he were dismissed—or if Marcus was injured and in need of help.

All the paranoid fantasies she’d ever had about bad things happening to her family squeezed Emma’s heart and lungs.

“Marcus?” she called, pushing open the unlocked door and stepping into the dim interior of the house.

The dog stood panting and wagging at Emma.

There was no obnoxious eighties hair-band music blasting from the kitchen, no explosions and screams coming from the giant television and game console in the living room. No creaks and groans from an old house giving clues to the whereabouts of its inhabitants.

Patton wagged and nudged her with his head, so she petted him. “Good boy. What’s going on? Where’s Marcus?”

He turned and padded toward the stairs, stopping to make sure she paid attention. Was Marcus upstairs, somehow injured? The band around her chest tightened another notch. She followed Patton, but by the time she reached the top step, a thought occurred to her. What if Marcus wasn’t alone? What if he’d exiled Patton because he had company?

It was quiet in the house, but maybe Marcus and his guest were snuggled down, enjoying some postcoital z’s while everyone else was working their asses off.

Well, she was outside his door now, and she had to be sure he was safe.

On Patton’s heels, she pushed open the door to her childhood bedroom and saw Marcus laid out flat on his back, feet crossed at the ankles, hands folded neatly on his hard stomach, eyes closed. He was sacked out so hard he didn’t seem to be breathing.

But Marcus wasn’t dead. He was living, breathing, and very warm, which she knew because she’d somehow made her way to his side.

The room smelled of spicy man and something she couldn’t quite put her finger on…something dangerous.

Since he was sleeping and not winking, smiling, or flirting with her, she gave herself a moment to study him. He was beyond beautiful. His thick, black hair was twisted into little corkscrews that normally bounced and bobbed like an outward extension of his personality. Russet brown skin, large nose, square jaw, and soft-looking, sensual lips that seemed to smile, even in sleep.

Before she knew it, she’d reached out toward him, then stopped, feeling like a creeper.

“Oh crap!” She jerked her hand back, but not before Marcus took her slim wrist in his big hand.

A pool of heat formed low in Emma’s belly, chasing away her reason for being there. “I didn’t mean to wake you,” she said, though she didn’t even convince herself.

“I’m glad you did,” he said softly, slowly tugging the hand he held. She didn’t pull away, intoxicated by his scent, the heat in his eyes. When he tugged her hand again, she toppled onto his chest. To escape those half-mast eyes, she looked down at his full, luscious lips, which opened to say, “You can kiss me if you want.”

She wanted. Oh, how she wanted as his hands spanned her waist, then traveled to her hips. There was something unreal about this moment that made her believe she could kiss him, that it would be a good, good thing to kiss this man.

When Teri Anne Stanley isn’t writing sassy, sexy, love stories from her home near Sugartit, Kentucky (which is between Beaver Lick and Rabbit Hash. Seriously), she’s probably doing some sort of arsty-crafsty thing and hanging with Mr. Stanley, her three favorite children, and the dogs. Sometimes she’s masquerading as a day job science geek. She’s definitely not cooking or cleaning.