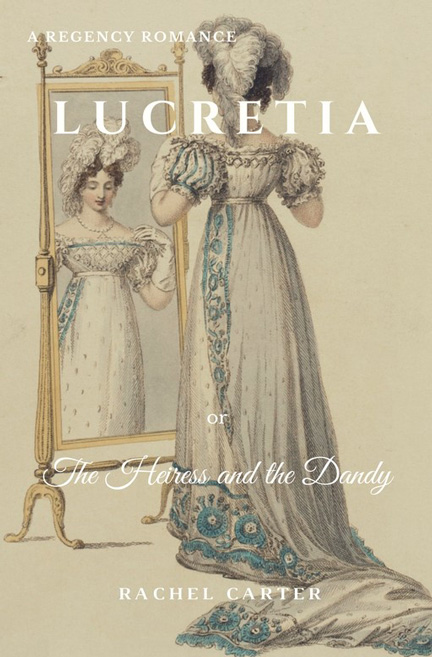 Kidnappings, elopements, duels, dastardly plots. Making your debut has never been so hazardous.

Hidden away from polite society, Lucretia Lanyon spent her time daydreaming of dandies, extravagant pantaloons and intricate neckties. Now an heiress and suddenly the toast of Society, she finds her ideal man in Viscount Prendergast, the one bachelor in London who doesn’t seem interested in marrying her. Lucretia must navigate around nefarious impostors, jealous mistresses, devious fortune hunters, and the match-making schemes of her aunt, while she tries to attract the notice of her beau… Lucretia or The Heiress and the Dandy

I highly recommend this for lovers of the traditional Regency needing something a bit different but with all the familiarity of the genre.  I think Rachel Carter is an upcoming talent, and worthy of taking note.

Kidnappings, elopements, duels, dastardly plots. Making your debut has never been so hazardous.

Hidden away from polite society, Lucretia Lanyon spent her time daydreaming of dandies, extravagant pantaloons and intricate neckties. Now an heiress and suddenly the toast of Society, she finds her ideal man in Viscount Prendergast, the one bachelor in London who doesn’t seem interested in marrying her. Lucretia must navigate around nefarious impostors, jealous mistresses, devious fortune hunters, and the match-making schemes of her aunt, while she tries to attract the notice of her beau.

Christopher Prendergast, an aspiring dandy, was busy perfecting the art of tying his cravat, learning how to use his quizzing glass as a social weapon, and secretly excelling at Jackson’s boxing saloon. To everyone’s surprise, Christopher finds himself in love for the first time in his life. He must now learn how to secure a lady’s affections. He stumbles through a wooing campaign that includes bizarre gifts, terrible poetry, daring rescues and, finally, honesty.

Perfect for fans of authors such as Georgette Heyer and Jane Aiken Hodge, Lucretia is a traditional regency romance brimming with period detail, unlikely heroes, delicious villains, and the flourishing of an unlikely love.

A classic Reg Rom with fun moments that are often funny, this is a great read for most ages. A dandy and an Incomparable meet at a ball…and the heroine is quickly on pursuit.

Jam-packed with action, moves along at a fast pace. Period detail and diction gives the book a real authentic flavour.

The dialogue is really crisp and witty –  at times, it is laugh out loud funny. Highly recommend.

5 Stars  A breath of fresh air…

Effortlessly captures the style and manners of the genre; witty and energetic dialogue, with characters that are perfectly drawn – Carter has an incisive and assured voice – more please!

Very entertaining novel about a debutante coming out into society under unusual circumstances. The interesting characters turned this into a real page turner. Action packed and lots of fun!

I was impressed with this book! Great first offering by the author with a fun plot, engaging characters and intelligent vocabulary… “Sweet” sensuality level.

Lucretia did not see her dandy again that evening. She was disappointed but, while she could not put him quite out of her mind, she knew polite circles to be small and had every expectation of coming across him very soon at some party or other. She was not mistaken, and the next day spotted him mincing through Hyde Park as she took the air with her cousin in his phaeton.

“Arnold, who is that gentleman?” she asked gesturing in his direction with studied unconcern.

“But surely you know Mr Silksley?” Arnold asked. “Come to think of it, I’m sure I’ve seen you talking to him any number of times. Is not he one of your many admirers?”

“No, not Silksley, of course I know him!” she scorned, assured now in her knowledge of the world she had joined. “I mean the gentleman behind him.”

“Oh him? That painted pup, he does look rather ridiculous, doesn’t he? That’s Topher Prendergast. He fancies himself a bit of a dandy, does Topher, but his taste in attire is somewhat erm… flamboyant.”

The phaeton drew closer to Lord Prendergast and, catching a closer look at him, Arnold uttered, “Good God! I fancy those bottle green stripes are a mistake, especially against the purple. Where does he buy such shocking waistcoats? He’s only a young cub though and we can only hope that his friends will encourage him to adopt a less remarkable wardrobe as he matures. Aside from his execrable taste in fashion, he’s a very good sort of chap. He’s got the most remarkable left hook and has a better eye for a wafer than any man I know.”

This last was incomprehensible to Lucretia, who very naturally had no interest in male sports, but she felt herself bristle at the animadversions on the gentleman’s dress. Lucretia saw in him her ideal, and thought the chastised outfit splendid. She could see not a seam, not a button amiss. But she saw that she could use her cousin’s strictures to good account, observing casually: “Perhaps his wife will improve upon his wardrobe?”

“Wife?!” Arnold exclaimed with a crack of laughter. “Oh, no chance of that! Not in the petticoat line at all isn’t Prendergast. How aghast he would look at the suggestion!” Her cousin chortled. “It’s almost worth suggesting it to him just to see him squirm. Although I fancy he’s had quite enough hints on the virtues of matrimony from his mother, she seems keen to marry him off. But mothers really have no greater joy than to set about matchmaking,” he said ruefully. “I’ve had an earful of it myself so I sympathise with the poor fellow.”

Lucretia did not pursue the topic further for she had no wish to advertise her feelings, and she quickly turned the subject.

Lucretia stored up what she had learned to reflect upon later. It did indeed seem that Viscount Prendergast was in no way disposed towards the company of females. And although she saw him any number of times over the following weeks, he was patently uncomfortable when occasion forced him to hold conversations with females, danced most infrequently (although very elegantly) and quite obviously did all he could to avoid interaction of any sort with the fairer sex.

While Lucretia was relieved to find herself without a rival, it did present problems in fixing her interest with her chosen beau. Wary of betraying her feelings to anyone, she was unable to orchestrate even an introduction to Lord Prendergast, for he naturally sought none with her.

Women of less resolution would have admitted themselves to being at point non plus, but Lucretia had a good deal of resourcefulness and, not content to wait patiently hoping for fate to take a hand in the affair, determined to make her own fortune.

Lucretia is available on Amazon in both kindle and paperback form.

I started out on a literary path at university before taking a detour into nursing. I love my day job, rushing around, caring for people. When I’m not dealing with the craziness of hospital life, I feed my creative side by making time for my love of reading and writing. It’s a great moment every day when I sit down in my little nook and get lost in other worlds. I’m also currently studying for a Masters in creative writing at the university here in York, which is awesome.

I enjoy a wide variety of books; some of my favourite authors are Georgette Heyer and Jane Austen, who have influenced my period writing style. I am also a big fan of paranormal romances, particularly with werewolves and vampires.

I grew up in Hong Kong but now live in York, UK. I have found beauty and inspiration in both the hectic big city environment and the quaint ancient feel of York.

One of my main passions in life is skiing. There is nothing more amazing that whizzing down a red run, snow all around and sparkling like it’s diamond-studded. It helps me clear my head and inspires me. I’ve come up with any number of plots and characters while I’m on the slopes. My other hobbies include international travel, city sightseeing and reading.

If you have any feedback, please do get in contact. Rachel would love to hear from you!