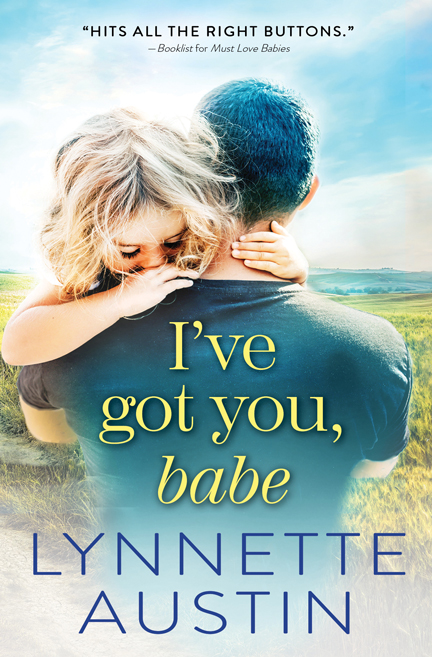 What People Are Saying about Lynnette Austin:

“Austin is a talented writer with a gift for capturing the charming…dynamic and interesting.”—Kirkus Reviews for Must Love Babies

“Austin’s sweet small-town romance hits all the right buttons.”—Booklist for Must Love Babies

“Readers will be drawn in most of all by the sweet Southern romance.”—Publishers Weekly for Picture Perfect Wedding

“Romance that has it all… A beautifully written tale of romance, friendship, and learning to trust.”—Fresh Fiction for Every Bride Has Her Day

“Powerful chemistry that makes this a winning page-turner.”—Publishers Weekly for Must Love Babies I’ve Got You, Babe
by Lynnette Austin
Publication date: August 27, 2019

Where do you go when you’re at the end of your rope?

Former Marine Tucker Wylder wants nothing more than to work with his brothers in their vintage car restoration business and be left alone with his nightmares and regrets. The last thing he needs is to take on someone else’s troubles…

Then Elisa Danvers and her young daughter arrive in Misty Bottoms, Georgia. Elisa has reached the end of the line—flat broke, engine trouble, sick in body and spirit. Tucker steps up to the rescue and finds himself reluctantly taking care of a feisty preschooler and her independent mother, who doesn’t seem to want his help. And Tucker isn’t sure he’s ready for the way precocious little Daisy and headstrong, beautiful Elisa herself capture first his bachelor household and finally his carefully guarded heart…

A cup of hot, black coffee in hand and a well-earned—and desperately needed—weekend fishing trip on his mind, Tucker unlocked the front door of Wylder Rides. The smell of oil and new tires welcomed him like an old friend. He liked the peace and quiet of the early morning, the solitude before his brothers arrived.

When a breeze drifted in through the open bay door, he thanked the stars the calendar had finally flipped to October. This summer, his first in Misty Bottoms, Georgia, had been hotter than Hades. With the onslaught of autumn, though, temperatures had dipped to a less humid mid-seventies.

Still, even the Georgia low-country summer had been a hell of a sight better than the sweltering heat he’d suffered during his Middle East deployment. There the July temperatures hovered above the hundred-degree mark. Add in the blistering sun, and the place could turn a man’s hide to shoe leather in no time. Don’t even get him started on the never-ending sand that found its way into every crack and crevice on the human body and scoured exposed skin raw.

A tough place to live. A worse place to die.

Involuntarily, his hands clenched into fists. Taking a deep breath, he relaxed them. Not today. He dropped to the creeper, slid partially beneath the ’Vette, and got busy replacing the brake lines.

Southern rock blasted from his stereo. Over the magic of Charlie Daniel’s fiddle, Tucker heard a car slow, then pull in out front. Its muffler was shot. The engine knocked, coughed and sputtered, then shut down with a rattle.

Seconds later, a totally different sound caught his attention—high heels on the garage’s concrete floor. Tucker slid a sidelong glance toward the front of the bay and almost swallowed his tongue. Framed in the narrow window between the floor and the car’s bumper were a pair of legs that would have any red-blooded man drooling…and they crossed slowly toward him. Laying the wrench on the floor beside him, he gave a push with his foot and slid the creeper from beneath the car.

Flat on his back, he let his gaze travel up over a body that matched the legs beat for beat, then on to a face only angels could have created. The heart-shaped face, with its sensuous lips and the biggest, bluest eyes he’d ever seen, sent a shockwave rocketing through him. Long, pale blond hair had been caught back in a ponytail.

An illusion? Maybe he’d breathed too many gas fumes and was hallucinating?

Nope. This woman was real and, from the expression on that stunning face, in trouble.

“My car—” She waved a hand toward the front of the building.

“Could use some work,” Tucker finished, slowly getting to his feet. Wiping his hands on a grease rag, he moved toward her. “Look, we’re not a repair shop, but I can probably figure out what’s wrong. If it’s minor—”

She swayed and reached out toward the wall.

“You okay?” Even as Tucker spoke, he saw those mind-blowing eyes go blank. Dark lashes fanned her cheeks.

With a muttered curse, he lunged, barely reaching her before she hit the floor. Heart racing, he held her against him and swore again. Out cold.

“Hey, can you hear me?” He tapped her cheek but got no response. “Wake up.”

Sweat broke out on his brow. Where were his brothers? They should be here by now. What was he supposed to do with an unconscious woman? He leaned his head close to hers, relief flooding him when her breath whispered against his cheek.

A high-pitched wail split the air. Panicked, his head whipped up, and he glanced toward the beater parked out front. The driver’s side door hung open; in the back, strapped into a child’s seat, sat a little girl with her mama’s pale blond hair—a little girl winding up for one hell of a crying jag.

And the day just got better!

He shook the limp woman gently, noticed the sheen of perspiration on her face. “Come on, sugar. For God’s sake, open those baby blues.”

Kneeling and taking the woman down with him, he spread an old garage blanket and laid her carefully on it, straightening the short skirt of her flower-print dress.

With his forearm, he swiped the sweat from his brow. “Hey, wake up.”

Okay. Time to tackle the second half of this double-feature horror show.

Edging toward the used-up Ford Escort and its young occupant in much the same way he’d approach a suspected sniper’s nest, he pulled out his phone and hit 911.

The sheriff answered on the first ring. “Misty Bottoms Police Department. What can I do ya?”

“Jimmy Don, it’s Tuck Wylder. I’m out at my shop.” Opening the sedan’s back door, he stared at the young child, at her tear-covered face and runny nose. He’d guess her to be maybe two or three years old. An opened bag of pretzels lay on the seat. Leaning in, he grabbed one and handed it to her. She raised it to her mouth and chewed, her cries dying to quiet whimpers.

“A woman pulled up in front of our place, and, well, she’s passed out.”

Exasperated, Tucker raked fingers through his short hair, his gaze travelling over the woman. She still hadn’t moved. What a friggin’ mess!

“Yeah, you do. She came with the woman who’s passed out on my garage floor.”

Tucker raised his eyes to the heavens and rubbed at his forehead. “Which one?”

“How would I know? Nothing wrong with her lungs, I can tell you that.” The nagging beginning of a headache bloomed into a full-fledged whopper.

“You need an ambulance or you gonna take the gal in to see Doc Hawkins?”

“What?” Tucker pulled the cell away to stare at it. Bringing it back to his ear, he asked, “Are you serious, Jimmy Don? You want me to pick up an unconscious stranger, toss her in my car, along with the baby, and drive them into town?”

“So I guess you want me to send the town’s ambulance out there.”

Lynnette Austin has been a finalist in Romance Writers of America’s Golden Heart Contest, PASIC’s Book of Your Heart Contest, and Georgia Romance Writers’ Maggie Contest. Having grown up in a small town, that’s where her heart takes her—to those quirky small towns where everybody knows everybody…and all their business, for better or worse. Visit her at http://www.authorlynnetteaustin.com. Lynnette splits her time between the beaches of Florida and the Blue Ridge Mountains of northern Georgia.