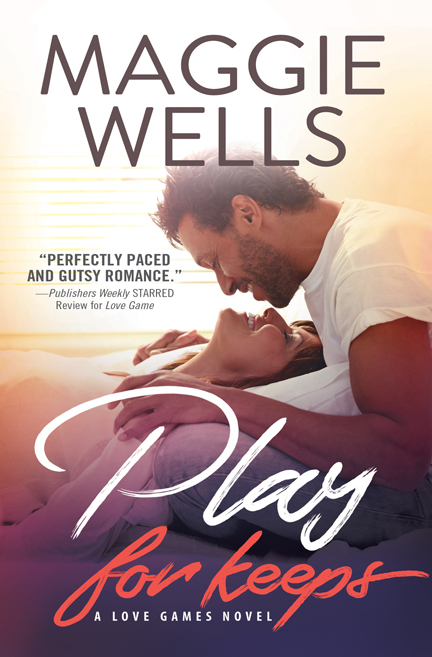 Mixing business and pleasure is a dangerous game…

Tyrell Ransom, the new men’s basketball coach, is ready to whip his team into shape and start winning some games. But when compromising photos of his soon-to-be-ex-wife with one of his players go viral, everything comes crashing down. With reporters thick on the ground, Ty and his team need some serious damage control—now.

When public relations guru Millie Jenkins arrives in her leopard-print cape to save the day, things really heat up… Soon they’re going to have to work double time to keep their white-hot chemistry out of the headlines.

Mixing business and pleasure is a dangerous game…

Tyrell Ransom, the new men’s basketball coach, is ready to whip his team into shape and start winning some games. But when compromising photos of his soon-to-be-ex-wife with one of his players go viral, everything comes crashing down. With reporters thick on the ground, Ty and his team need some serious damage control—now.

When public relations guru Millie Jenkins arrives in her leopard-print cape to save the day, things really heat up… Soon they’re going to have to work double time to keep their white-hot chemistry out of the headlines.

Clean-shaven, minty fresh, and unable to stand waiting a second longer, he snatched up the phone and padded into the condo’s master bedroom. The furnishings were comfortable if not a bit generic. The bed was a standard king, which meant he slept diagonally most nights, but the pillows were firm and plentiful. Hitting the recall button with his thumb, he propped a couple against the headboard, then dropped onto the bed. The knot at his waist loosened a bit but held the ends of the towel together enough to keep him decent.

The throaty rasp of her greeting did things to him. Stirred thoughts and urges he’d bank for later. For now, he had to set the jumble aside and form coherent sentences. “Hey, sorry I missed your call.”

His lack of explanation might have been a bit of payback. Millie never gave excuses for why she would need to call him back or accounted for her time in any way, so he followed her lead. He didn’t want her thinking he counted down the hours until he could talk to her again. Even if he did.

Playing by the unwritten conversational rules, he opened with an inane yet remarkably telling question. “How was your day?”

She sighed. “Boring. I hate summer session. Campus is like a ghost town in the afternoons. Kate has banned me from her office because I told her I was tempted to release the bikini picture from her honeymoon. I have no idea why she’s being such a pill. If I were built like her, I’d dance a bikini-clad flamenco on top of every swimsuit edition in the athletic department’s secret archive.”

Ty wasn’t sure how he was supposed to respond, so he stretched his legs out in front of him, crossed one ankle over the other, and started in what seemed like the safest place. “Secret archive?”

She guffawed. “Don’t play innocent. I know what’s in the file cabinet at the back of the bullpen.”

He smiled, the image of Millie rifling through the battered metal drawers in search of contraband forming in his mind’s eye. She wasn’t wrong. When the university’s human resources director cracked down on “potentially offensive” materials displayed in the workplace, the warren of cubicles housing the coaching assistants was hardest hit. All calendars, posters, and, yes, a nearly exhaustive collection of Sports Illustrated swimsuit editions were deemed too dangerous for public display. But instead of taking the stuff home, some smarty-pants locked all the loot in a filing cabinet no one bothered to use once departmental records became computerized. A limited number of duplicate keys were made, and being awarded one had become a departmental rite of passage.

At least now Ty had a pretty good idea who’d planted a copy of Burt Reynolds’s Cosmopolitan centerfold in the mix.

“Are you the one who keeps slipping issues of GQ and Esquire in?”

“Not me,” she said in a singsong voice. “But I can tell you people really are crazy about a sharp-dressed fella.”

“Sadly, I don’t think they’re having any impact on Mack or Beau’s wardrobe choices,” he said gravely.

Mack and Beau were the elder statesmen of the Warrior coaching staff. They were known for their love of polyester shorts, snow-white athletic shoes, and, in Beau’s case, striped tube socks color coordinated with whichever polo-collared shirt his wife of over forty years had pressed for him. They were also two of the handful of coaches who’d willingly relinquished their keys to the cabinet. As far as Ty knew, the head coaches declined their copies. He knew far better ways to get shit-canned in professional coaching than ogling two-dimensional versions of scantily clad women. The three-dimensional ones caused enough trouble.

“I’d run away with Mr. Beau if he’d ditch that hussy.”

“Watch yourself. She may look all sweet and charming, but I’m pretty sure Mrs. Beau would claw your eyes out if you put the moves on her man.”

Millie heaved a heavy sigh. “No use. I can’t get the guy to look twice at me anyhow.”

“I have fifty that says he’s looked more than twice.”

Her delighted laugh made the prospect of coughing up fifty bucks on a bet he couldn’t prove one way or another totally worthwhile. “You’re so good for my ego.”

By day, Maggie Wells is buried in spreadsheets. At night she pens tales of people tangling up the sheets. The product of a charming rogue and a shameless flirt, you only have to scratch the surface of this mild-mannered married lady to find a naughty streak a mile wide. She has a passion for college football, processed cheese foods, and happy endings. Not necessarily in that order. She lives in Arkansas.

Enter to win one of five copies of Love Game by Maggie Wells!