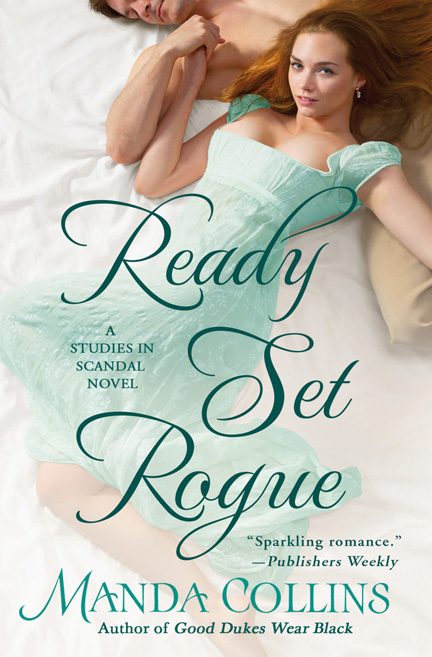 From the bestselling author of The Lords of Anarchy series, comes the exciting first installment of Manda Collins’ new Studies in Scandal series: READY SET ROGUE (St. Martin’s Paperbacks; January 3, 2017; 978-1-250-10986-6). Collins is back in the Regency era with a passionate, yet unexpected romance that comes in the wake of a thrilling murder mystery.

“Expertly crafted characters and a fast-paced plot…Collins craftily combines sensuous romance with a touch of suspense, creating a delightful novel that will leave readers eagerly anticipating the next installment.” —Publishers Weekly on GOOD EARL GONE BAD

“Warmth, wit, wicked sensuality, and an intriguing whodunit take this story over the top.” —Romance Junkies on A GOOD RAKE IS HARD TO FIND

“With her distinctive voice and keen knowledge of the Regency era, Collins adds another novel to her Lords of Anarchy series…a sensual and compelling read.” – RT Book Reviews on GOOD DUKES WEAR BLACK From the bestselling author of The Lords of Anarchy series, comes the exciting first installment of Manda Collins’ new Studies in Scandal series: READY SET ROGUE (St. Martin’s Paperbacks; January 3, 2017; $7.99; 978-1-250-10986-6). Collins is back in the Regency era with a passionate, yet unexpected romance that comes in the wake of a thrilling murder mystery.

When scholarly Miss Ivy Wareham receives word that she’s one of four young ladies who have inherited Lady Celeste Beauchamp’s estate with a magnificent private library, she packs her trunks straightaway. Unfortunately, Lady Celeste’s nephew, the rakish Quill Beauchamp, Marquess of Kerr, is determined to interrupt her studies one way or another…

Bequeathing Beauchamp House to four bluestockings—no matter how lovely they are to look at—is a travesty, and Quill simply won’t have it. But Lady Celeste’s death is not quite as straightforward as it first seemed…and if Quill hopes to solve the mystery behind her demise, he’ll need Ivy’s help. Along the way, he is surprised to learn that bookish Ivy stirs a passion and longing that he has never known. This rogue believes he’s finally met his match—but can Quill convince clever, skeptical Ivy that his love is no fiction?

Despite her discomfort and distress at being drenched, she was in possession of the sort of temperament that did not allow the petty annoyances of life to dampen her spirit. He could not think of a single other lady of his acquaintance who would meet such a situation with such equanimity.

“If you wish,” he said over his shoulder, “you may remove your gown and wrap up in one of the blankets . . .” He trailed off as he saw that she was already in the process of doing just that. He swallowed at the sight of her breasts outlined by the wet fabric as she tried to reach behind to unbutton her gown.

“I am trying to do just that, but I’m afraid this gown requires the assistance of another pair of hands.” In another woman he might have suspected her of flirtation, but there was a sort of shy diffidence in the way she spoke that told him she was not trying to be coy. It was a refreshing change from the cynical seductions he was used to in London.

But when he looked up, their eyes caught, and he muttered a curse. She might be an innocent, but she had a wellspring of natural sensuality that just might do him in.

Completely unaware of the direction of his thoughts, she asked, “Would you mind helping me?”

He was crossing toward her before she even finished speaking, and when he moved to stand behind her, he was almost jealous of the wisps of damp hair that kissed the nape of her neck. “Move your hands,” he said thickly, un- able to say more in case he’d tell her what he was truly thinking.

As he bent his head a little to see the buttons, Quill was assailed by the scent of woman mixed with rosewater ris- ing from her warm skin. He fumbled a little as he set his fingers working against the fastenings, unable to resist dragging a little against the smooth skin of her back as one by one he pulled the bindings free. It was near impossible for him to breathe as he watched inch after inch of her gown part to reveal first the almost transparent fabric of her chemise, then neatly threaded laces of corset below.

As if she sensed his hesitation, she said quietly, “That’s good enough. I think my gown bore the brunt of it.”

The danger of the temptation she posed suddenly making its way into his brain, Quill pulled his hands back as if they’d been licked by flames. “I’ll go have a look at the fire,” he said pointedly as he turned his back to her and placed one hand against the wall beside the stone fireplace and gazed down into the actual flames below.

Perhaps it would have been safer for them both if they’d pressed on to Beauchamp House, he reflected as he tried not to listen to the rustling of her clothes as she slipped out of them. It had been years since he’d felt the sort of uncontrolled desire that held him in its grip now. It was impossible to forget every luscious detail of her. From the smooth skin of her bare back to the flush in her cheeks.

He’d also been cursed with a healthy imagination when it came to his carnal desires, which now unhelpfully flooded his mind with all the delicious ways in which two adults could put a rainy afternoon in close quarters to good use.

“You may turn around now,” Ivy said finally, after several fraught minutes of him trying to think of everything but the woman undressing just feet away from him, and failing miserably.

When he turned, he saw that the thick wool blanket that covered her was about as unflattering a garment as it could be. But even that did nothing to quell the effect of her loveliness on him.

“You may sit beside me if you like,” she said tentatively, her green eyes perhaps seeing more of his discomfort than he was comfortable with. “There’s no other chair here, and it would be ridiculous for you to sit on the floor when there is a perfectly good seat here.”

His expression must have shown his skepticism as he looked pointedly at the empty place beside her on the small bed.

“Do not be missish, my lord,” she said, echoing his own words to her as they huddled beneath his greatcoat. “We are both sensible creatures. I can sit beside you without unleashing my base passions on you and offending your delicate sensibilities.”

Despite his misgivings, Quill bit back a laugh. “I believe that is supposed to be my line,” he said with a grin. “You must think me a poor figure of a man if you think I will collapse in a fit of the vapors.” As he spoke, he walked the few steps to the other side of the cottage and lowered himself gingerly to the cot beside her.

“Hardly that,” she said holding her blanket at the neck while extending her other hand toward the heat of the fire. “You looked so serious, I thought to relieve the tension a bit, that’s all.”

“You use humor like that frequently, don’t you?” he asked, unfastening the diamond stick pin from where it nestled in the now-crumpled folds of his cravat.

Before she could respond, he said, “Let’s use this to hold that,” holding up the pin.

Nodding, she shifted a little to face him, lifting her chin so that he could duck his head and see what he was doing as he stabbed the pin through the thick blanket. Pulling back a little, he looked up to find her green gaze lingering on his mouth. And unable to stop himself, he gave in to the temptation that had dogged him ever since they set out together that morning.

Pulling her against him, he covered Ivy’s mouth with his own, and kissed her.

Copyright © 2017 by the author and reprinted by permission of St. Martin’s Press. Manda Collins is the author of The Lords of Anarchy series, which includes Good Earl Gone Bad and A Good Rake is Hard to Find, as well as several other Regency-set romances. She spent her teen years wishing she’d been born a couple of centuries earlier, preferably in the English countryside. Time travel being what it is, she resigned herself to life with electricity and indoor plumbing, and read lots of books. When she’s not writing, she’s helping other people use books, as an academic librarian.