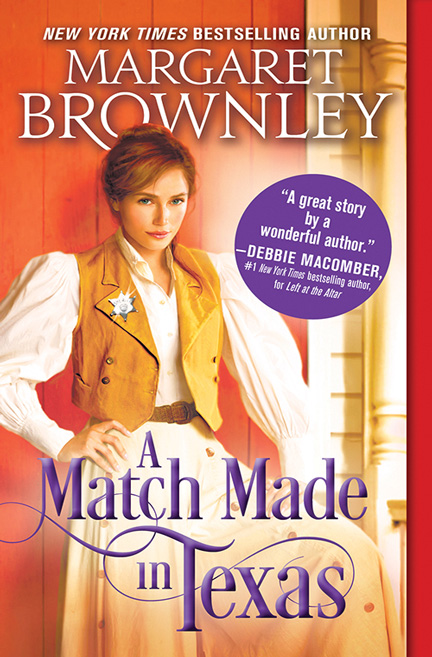 A MATCH MADE IN TEXAS by Margaret Brownley

And a single woman can change the course of history:

There’s a new sheriff in town. Title: A Match Made in Texas

And a single woman can change the course of history:

There’s a new sheriff in town.

Amanda Lockwood gets more than she bargained for when she’s elected Two-Time Texas’s first female sheriff. Anxious to prove herself, she sets out to stop crime in its tracks—taking down wanted man Rick Barrett in the process. But there’s something special about the charming outlaw. Common sense says he must be guilty…but her heart keeps telling her otherwise.

So what’s a sheriff to do? Gather an all-female posse and ride to save the day.

Things sure don’t look good for Rick. If he doesn’t convince the pretty sheriff to let him go, he’ll soon be pushing up daisies. But his plan to woo her to his side backfires when he’s the one who falls head over heels. Now he must choose between freedom or saving the woman he loves…and the clock is ticking.

Who knew A Match Made in Texas could be such sweet, clean, madcap fun?

FUN FACT ABOUT THE BOOK

You’re invited to a hanging; Amanda was shocked when the mayor sent out invitations to a necktie party, but that’s how it was done in those days—for real.

Rick looked up from the newspaper as Miss Sheriff stormed into the cell room. One look at her face told him she was loaded to the muzzle.

Standing, he gaped at her. Never had he seen her horns in such a tangle. “What’s got you so riled this time?”

She glared at him, eyes flashing blue fire. “I told you once and I’ll tell you again!” The red feather on her hat shook as she spoke. “I am not letting you go. So you can just get that out of your head.”

He rubbed the back of his neck. “All right.”

She narrowed her eyes. “I mean it.”

Her eyes blazed with doubt. “Whether you like it or not, you’re standing trial. Your lawyer—”

“So that’s what this is about. Birdsh…uh…talked to you.”

“He’s trying to save your neck.”

“By having me admit to somethin’ I didn’t do!”

She blew out her breath. “If you work with him, justice—”

“Justice? Justice! I spent five years in prison for a crime I didn’t commit. Five years! That’s what justice did to me.”

She gasped as if someone had just punched her in the stomach and he immediately regretted his hastily spoken words.

There was no way she could know. His breath whooshed out of him. He hated arguing with her. She wasn’t to blame for any of this. The endless court delays and failed efforts to find the real killer frustrated him, but it wasn’t fair to take it out on her.  He sensed that she truly cared about him and wanted to help him—or was that just wishful thinking on his part?  All he really knew for sure was that he needed someone to believe in and he wanted that person to be Amanda.

“They thought I killed my wife,” he said quietly, the previously unspoken words sounding strange even to his own ears.

Her lips parted and eyes widened, but otherwise she didn’t move.  “Go on,” she said as he struggled to continue.

And so, at last, he told her the whole ugly story. Each word weighed heavy, like it carried a piece of his heart with it. How he found his wife dead. The long, drawn-out trial. The fact that it took five years before a witness came forward. He told her everything except perhaps the most important thing of all—that the man he was now accused of killing was his wife’s real killer.

The eyes that had moments earlier blazed with blue fire now softened with sympathy and compassion. “I’m so sorry.”

Something snapped inside him. He didn’t want her feeling sorry for him. Memories of the past had stirred up the anger he’d thought had been long buried.

“So what do you want me to do? Stand by and let justice fail again?” He didn’t know he’d raised his voice until he saw her flinch.

“You can do that!” she shouted back. “Or you can stand up and fight like a man.”

“I am fightin’. The only way I know how. By tryin’ to find the real killer.” He picked up a stack of photographs from his cot and waved them at her. “Given enough time and with Hobson’s help I’ll find him. I swear to God I will.”

Her eyes widened. “Hobson took those?”

He tossed the photographs onto the cot. “I gave him the description of the man seen leaving Cooper’s room. He hauled in every man he could find fittin’ that description, but it took too much time. We figured that photographs would be quicker.” He frowned. “I don’t want the kid gettin’ into trouble for this.”

He heard her intake of breath. “I-I don’t know what to say.”

“Say you believe me. Say you believe I’m innocent. Say—” Surprised that he’d almost asked her to say that she cared, he clamped down on his jaw. “T-that’s all I want.”

He didn’t mean to make her feel bad. She had enough on her shoulders. Enough to worry about. Guilt washed over him. He’d tried to take advantage of her inexperience and yes, even her good heart. For that he felt ashamed.

“I won’t ask you to help me escape. Never again.” His voice hardened. “Just don’t ask me to put my faith in the justice system.”

New York Times and CBA best-selling author MARGARET BROWNLEY has penned nearly forty novels and novellas. Her books have won numerous awards, including Readers’ Choice and Award of Excellence. She’s a former Romance Writers of American RITA® finalist and has written for a TV soap.  She is currently working on a new series.  Not bad for someone who flunked eighth grade English.  Just don’t ask her to diagram a sentence.